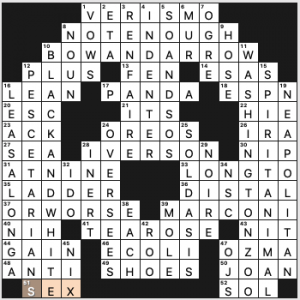 This … was not a fun solve for me. It started out with seeing a face-of-death pumpkin rather than a panda face in the blank grid, and then 1-Across took me right to the Well of  Poor 1-Acrosses. Per the constructor’s notes at Wordplay, he originally had the North African pepper paste HARISSA, increasingly popular these days, crossing SUR (Big Sur, Spanish for “south”) at 6d. Instead, we have the editor’s choice, 1a. [Opera style using everyday events rather than myth], VERISMO crossing a French word for “wall,” MUR. Really?? We had salmon for dinner tonight, seasoned with some harissa and topped with hummus and crumbled pita chips. Tasty, and with a little kick from the harissa!

Anyway, so it’s a panda face, and there’s 17a. [National ___ Day (March 16 observance, appropriate to this puzzle)], PANDA, with two unchecked letters. (The constructor notes that he’d hoped for circled squares on that P and A to emphasize the effect of the panda’s eyes, but no.) The other theme material (in this Friday puzzle) is 10d. [Like 17-Across], BLACK AND WHITE, and 11d. [Home for some famous 17-Acrosses, informally], WASHINGTON ZOO. Crikey! It’s the National Zoo. Who is “informally” calling it WASHINGTON ZOO? This should not be in the puzzle.

The low word count (61, I think) brings with it plenty of compromises in the fill besides the ones I mentioned already. Is anyone excited by FEN ESAS ATNINE OZMA ETA SOLDASIS and some assorted abbreviations?

Fave fill: BOW AND ARROW, REN FAIRE, LEA SALONGA, and NEAPOLITAN (though I’d have liked to see a pizza clue instead of ice cream).

3.25 stars from me. I do wish HARISSA had been there at 1-Across to spice up the puzzle a bit!

“It’s better than the panda situation” isn’t exactly a high bar, but honestly, THAT’S ALL I ASK today. This puzzle is a nice palate-cleanser and ensures that we get at least one interesting themeless on this end-times-feeling Friday. There were a lot of propers that I struggled with, and some fill that I’d have left OUT AT SEA, but there’s enough good stuff in here that it makes the grade.

The central long entry, MALCOLM GLADWELL, is a solid grid-spanning 15, but I can’t say he’s the kind of marquee that makes a puzzle exciting. It was more like, “Oh, yeah, that guy.” Other long entries include YEAR OF THE RAT, THAT’S ALL I ASK, HOUSE-SITS, and ENCHILADA. I love colloquialisms like THAT’S ALL I ASK, and the rest are also good, if not exactly revolutionary. But, like I said, today I didn’t need revolutionary from this puzzle; I just needed “better than the panda.”

Ok, now that I’ve written it up, I feel like we do still come out ahead of the panda, but like, not by much. Overall, a few stars for THAT’S ALL I ASK, SOLANGE, and the Twain quote clue for EVIL.

Jim P here filling in for Rebecca whose work life has taken a sudden uptick due to you-know-what. I’ll be covering the Mon, Wed, and Fri Universal puzzles for her for the time being.

And what a fun one for me to start off with. This was my kind of puzzle!

We’re presented with locales that are the sites of various horror stories (one film, one book, and one TV show), and then given a fun punchline at the end. 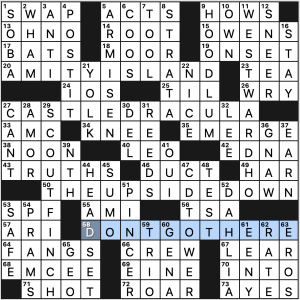 I love each of the three “franchises” (for lack of a better word) here, so this was right up my alley. And when I got to the punchline, I just had to smile.

And it appears this is a debut for both constructors, so congratulations on a fun one!

The fill is very nice, given the fact that there are only four themers. (Although it’s curious that the outer themers are in the fourth and twelfth rows, not the third and thirteenth rows as is most common.) But there’s much to like here, like “WESTWARD HO!”, SCOUT FINCH, Fred ARMISEN, CD TOWER, a gamer’s HEADSET, a HOODLUM (one of my mom’s go-to words), and a lone DAHLIA. Very nice.

Most of the clues were pretty straightforward, but I will note 38a [Time around nomination?]. NOON. It took me a long time to figure out what was going on here, since this cryptic style of cluing is so unexpected. NO and ON are the first and last letters of “nomination.”

Fun puzzle. Would’ve been perfect for Halloween, but I’ll take it anytime of the year. 3.75 stars.

Lita and Tass Williams’s Inkubator crossword, “A Fish Out of Water”—Jenni’s review

This is a delightful puzzle! The Email suggested looking at the full-color PDF even if you solved online. This is what the grid looked like: 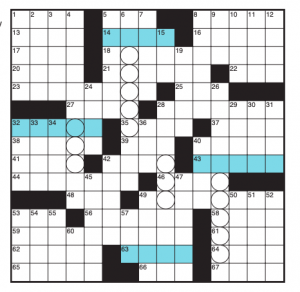 In the AcrossLite version, the blue bars are replaced by another set of circles. Each of those is a body of water: 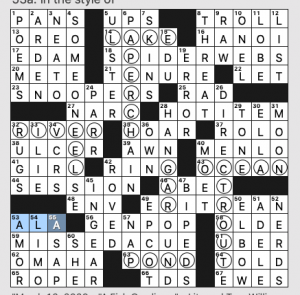 The Down answers with circles contain fish:

Each fish is out of the water. Nice!

What I didn’t know before I did this puzzle: that the ULSTER overcoat is named for a region of Ireland.

Quickly, because I’m off call, it’s gorgeous out, and a drink is calling my name. Plus society is grinding to a halt.

Each theme answer is a twist on a common phrase. 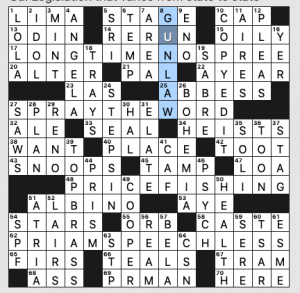 And the revealer: 69a [Ad guy responsible for four long puzzle answers?] is PR MAN. I like this theme a lot. It’s amusing; it’s consistent without being obvious, and it has two nice 15s to boot. Fun!

Skipping the other things today.

What I didn’t know before I did this puzzle: that Salinger’s ubiquitous ESME says “I prefer stories about squalor.”