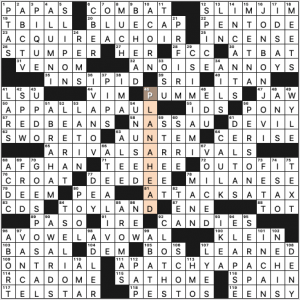 The theme is made-up phrases containing a word that starts with a schwa-ish sort of A sound paired with an “A ___” phrase that sounds like that word. The “A ___” bit is sometimes first and sometimes last in the themer:

There was perhaps more weird fill than one would hope. Got off to a bad start with the first two Downs being plural abbrev PTAS and semi-awkward ABC TV, with row 2 offering the unfamiliar BLUECAP clued as [Another name for the cornflower] (and the bloom’s Wiki page offers: “Other names include bluebottle, bluecup, blue blob, blue bonnet, cornbottle, boutonierre flower, hurtsickle, and gogglebuster.” So many amazing aliases in there, but no BLUECAP!) followed by obscure PENTODE ([Vacuum tube with five active components]). The rest of the grid contained better fill, but my attitude was already set by those early hits.

Good fill includes JON BON JOVI (some Chicagoans were organizing an “open your windows at 7 pm and sing Bon Jovi’s ‘Livin’ on a Prayer’ with your neighbors” tonight, but we were busy with our Lou Malnati’s deep-dish, plus I don’t know the words), the MILANESE preparation of food, a car thief’s SLIM JIM, RED BEANS, OUT OF IT, and T.S. ELIOT. Mosquitarian ATE ALIVE is cool, too, provided you’re like me and of little interest to mosquitoes.

I did notice how few women were in this puzzle. We have Susan DEY, Anne KLEIN, and fictional AUNT EM … and that’s it, in a Sunday-sized puzzle. There were some missed opportunities for the editors to improve this, too—MANN could be Aimee, DEE DEE could be Myers or Bridgewater rather than Mr. Ramone. Even VANCE could have brought a little diversity with actor Courtney B. rather than Cyrus.

For the  third Sunday in a row, the LAT is by a woman! Looks like Rich is participating in the Crossword Women’s March, at least on Sundays. If you’re enjoying this event, thank Rebecca Falcon, who suggested it – and think healing thoughts as she’s currently ill with COVID-19. Team Fiend misses you, Rebecca, and wishes you a full and speedy recovery.

Now, the puzzle! The components lack ing, as the title says. 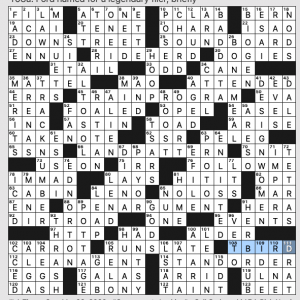 Nice theme! I don’t remember seeing it before and it was fun. All the base phrases are solid and the theme entries are well-clued.

What I didn’t know before I did this puzzle: never heard of TERRI Gibbs (and it took me a while to see that [Square things] was a verb instead of plural noun). Didn’t know that BIOGEN was a [Giant in the development of neurological disease therapies]. Looked at their product list – ah, those therapies. I try hard not to pay attention to pharmaceutical companies by name. Didn’t know that there’s an ASTIN in “Stranger Things” and had to look it up to see which one. It’s Sean.

Today’s puzzle is a rather subtle tribute to the great Patrick Berry, who was to earn a lifetime achievement award for puzzle construction at this year’s ACPT, which of course was canceled. Evan’s own write-up about it is here, and it’s very much worth hearing about it from him (he does a much better job explaining the connection than I could!).

THEME: Dante’s Inferno and the rings of hell. Each of the “rings” is indicated by the concentric gray/white rings.

THEME ANSWERS: (I think I’ll just “cheat” and have Evan explain via screenshot) 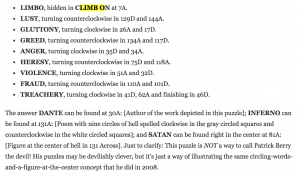 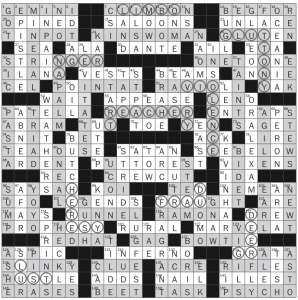 I was warned ahead of time (and via the notepad in Across Lite) that solving on paper was ideal due to the visual element of the rings, but I didn’t have access to a printer at the time and was anxious to solve, so I glimpsed at the pdf version, noted the rings, and solved in Across Lite anyway. It didn’t really mar the experience, and I enjoyed the oversized experience very much.

I found the whole grid much trickier than normal, but I was also distracted because I was answering phones at my friend’s restaurant, trying to jot down take-out orders and not screw the whole process up (it’s not a takeout kinda place, but now it is!). It felt heavy on names to me (all fairly crossed of course, but new names will slow you down), and I chuckled at the thought of last week’s “name-less” puzzle. Those included: STRINGER Bell, ILANA Glazer, IDA Wells (though I know I should know that), RAMONA Flowers (just realizing now that the clue wasn’t asking for a type of flower), Tycho BRAHE, James AVERY (totally blanked on that!), and LotR nickname STRIDER.

There were a ton more that I knew right away, but whatevs. 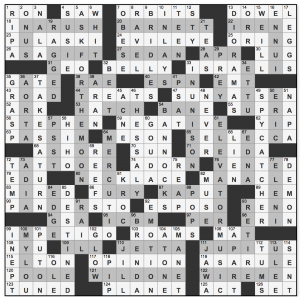 The original Berry grid off of which Evan’s was based

This grid was based off of Patrick Berry’s own grid for a puzzle called Going Around in Circles from 2008. And it’s titled after a puzzle suite that Patrick wrote called Vicious Circle (it’s one of the most clever and memorable set of puzzles I’ve ever solved. I highly recommend  purchase it and enjoy the experience while you’re hunkered down at home. Find it here.

A very clever idea. It stands alone as a solid puzzle, but is infinitely enhanced by the back story.

Time to do sum work.

THEME: Phrases that being with numbers, and those numbers add to ten. 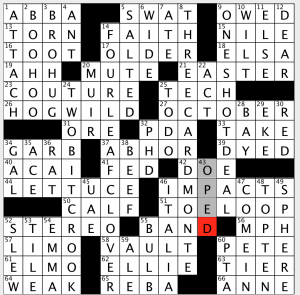 Fun puzzle, great idea, and nicely executed. I like it when the Universal varies it up a tad but still makes itself accessible to solvers at any level.

Only objection is… who DYEs things white? Haha. I call that bleaching where I’m from!

THEME: The word MIND can be found over a different states of matter in four sets of answers. 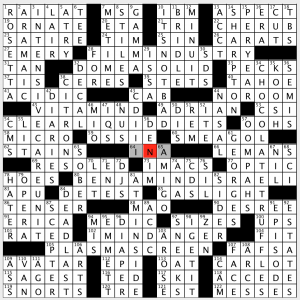 A very clever way to end my solving day! I solved this one alongside a novice solver who marveled at the idea and the way that the word MIND was hidden so well in the themers. And hey, can’t complain about that fill! Especially those 21 letter entries adorning the sides- though INTENSIVE CARE UNIT makes me cringe a bit at the moment. CHOCOLATE TRUFFLES balances that out. The placement of the themers is so well established in this puzzle that there’s no chance of anyone thinking longer, vertical fill would be part of it.

BENJAMIN DISRAELI was new for me, but if ever there was an inferable name, it’s that one!

Thanks for this, Emily!