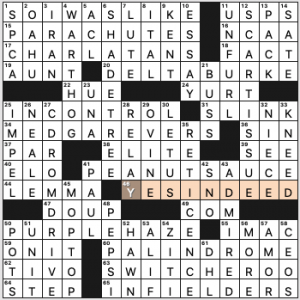 I confess I am distracted. Yes, it’s true. I’m looking at social media and reading some news and playing Words With Friends and generally just not writing about this puzzle.Been almost two hours since I solved the puzzle, and this is as far as I’ve gotten. (Raise your hand if you have also been much distracted this week.)

Likes: Colloquial “SO I WAS LIKE ….” all-too-common CHARLATANS, DELTA BURKE, MEDGAR EVERS, PEANUT SAUCE for satay (mmm, yes, we’ll order dinner from Joy’s Noodles, a local Thai joint, in a few days), “YES INDEED” (which is a song by Lil Baby feat. Drake) and “PURPLE HAZE,” PALINDROME, and the ol’ SWITCHEROO. Always nice to be reminded of Zora NEALE Hurston, too. 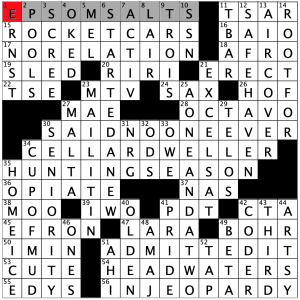 We have a wide-open 68 word grid this Saturday, but I found this one not too difficult at all. I flew through this in just over five minutes, and I don’t remember encountering anything too confusing. Which is a good thing; I am not complaining! Lots of fun in here, even if it could be just a tad tougher. Kudos to Joe for a great themeless grid with virtually no dreck! 4.6 stars from me.

My next LAT write-up is Tuesday. See you then, and stay safe during this unprecedented isolation time. 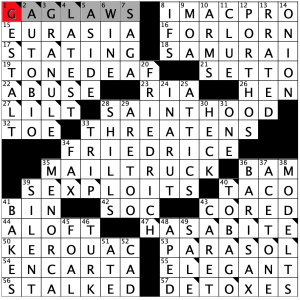 Usually the Stumpers that Stan constructs are under the pseudonym “Lester Ruff”, which is a play on the phrase “less rough”. Today, we simply have Stan’s initials, which may can mean two things: 1) Stan is not using pseudonyms anymore, or 2) this puzzle IS rough! My thought is on the latter, because I found this one brutal. The upper right and lower left weren’t too horrible, but the NW and SE corners stymied me for far too long. I used Across Lite for my solve, and you can clearly see all of the error marks I had. I haven’t felt frustrated during a Stumper in quite a long time, but this one got me worked up. But it is over now, and as is usually the case, everything seems quite fair after a second look. Great puzzle if you like your Stumpers difficult! 4.6 stars for this one.

Gotta wrap this up: there is a crossword tournament later today! Gotta get my couch ready!! Hope to “see” some of you later at the Crossword Tournament from you Couch! (Details here.) Have a great weekend and stay safe during this pandemic. 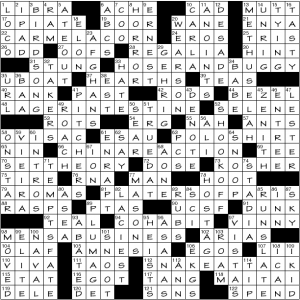 Here’s my interpretation of the title: for each theme answer, the word on the left has its center letter moved to its end—that is, the right. Thus the original phrases become wackified.

If anyone has a better parsing, please feel free to share it in the comments.

Not a wildly exciting theme, but it gets the job done.

METHUSELAAH, TEMPTS FATE, POLO SHIRT, and SET THEORY comprise the longest non-theme fill. Straightforward clues for all, with POLO SHIRT’s [Top choice] engaging in a bit of wordplay; it’s repeated for 69a TEE. (13d, 71d, 63a, 70a)