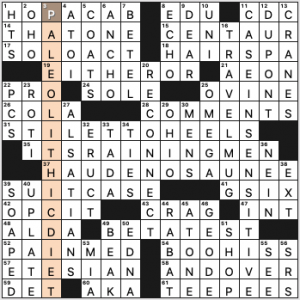 It’s been a rough day. Lost a wonderful friend-inside-the-computer today (not to COVID-19 but still a shock), a crossworder and a Cubs fan and an editor. And I’m scared for a close relative who works in a hospital and is taking on serious risks to do her job of keeping sick babies alive. I’m in no mood for blogging, honestly.

Liked most of the fill of 8+ letters, especially STILETTO HEELS, “IT’S RAINING MEN,” PAIN MED (but not the clue, because how many pain meds at the pharmacy are actually “number”s?), PALEOLITHIC DIET, TRAVEL MUG, and RECONNECT. Had to fight my way through 37a. [Native name for the Iroquois Confederacy], HAUDENOSAUNEE. (If this name was new to you, too, it behooves you to at least skim this informational Smithsonian document. Lacrosse! The “three sisters” of corn, squash, and beans!) The S crossing stymied me for a bit; 30d. [Shoe size specification], MEN’S? Pfft. There was also the matter of the final E, where we had 47a and 38d as cross-referenced clues with no hint that they’re both abbreviated (INTerior and EXTerior). Tough crossings for sure.

Also tough: 57a. [Kind of wind across the Aegean], ETESIAN. I thought I knew my interesting wind words but this one eluded me.

3.75 stars from me. Wash your hands and keep your distance!

Phone trouble and bad connections. It’s why I can never have a conversation on my cell at my house in UPSTATE New York.

THEME: Theme answers each have a “BAD” connection in that the word BAD is hidden in them. 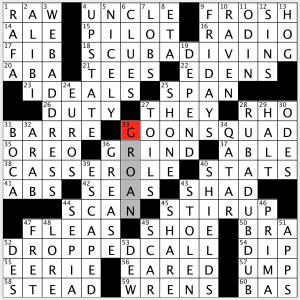 Hmmm. Took me a solid minute to make the connection between the revealer and the rest of the themers post-solve. The actual revealer, DROPPED CALL, seems a bit too far removed from what’s actually happening. The revealer should be BAD CONNECTION. DROPPED CALL makes me think either 1) The word CALL is going south out of the theme answers (but that can’t be the case here since two of the themers are already vertical) or 2) The word CALL is being omitted from a base phrase and wackiness ensues. When the actual revealer is in a (somewhat awkwardly worded) clue, it doesn’t land like it should.

Everything else felt on par though! GOOD SQUAD was fun! Also, I’m never sure how to use the word UPSTATE. Supposedly, I live in UPSTATE New York, but that’s not an accurate descriptor imo. I’m quite far “downstate” on the border of NJ and PA. I don’t think it’s fair that UPSTATE means anything that’s not NYC. But if that’s the worst of my complaints today, then I’m a happy fella. 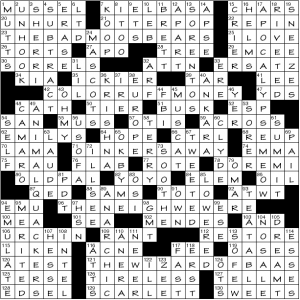 Not super-thrilled with the theme, but it’s solid enough. Some inconsistencies: two of the puns are attributive (OINKERS and QUACKERS), two are plurals (MOOS and BAAS), one title (42a) loses the definite article, which necessitates a “With ‘The'” stipulation in the clue. Whether these are significant enough to affect your solving experience or appreciation of the theme is up to you.

For your perusal, here is a Wikipedia page listing animal sounds, and here’s another which compares them in different languages—something that fascinates me.

With so many, some obviously gratuitous, I can’t help but think it was an intentional effort on the part of the constructor and/or editor. But why oh why then did they go with Siddhartha for the Herman HESSE clue (107d) when Steppenwolf is equally well-known? 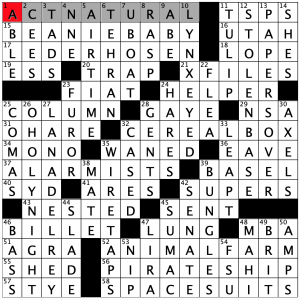 This puzzle could have been a Stumper, I suppose, with harder clueing, but everything in here is so smooth that it functions just fine as an LAT Saturday puzzle. I am curious, as is usually the case, as to who did what on these themeless puzzles. Whoever did what, they did a great job! This was a fun puzzle, even though I found it not too challenging. There was plenty of interesting stuff in here to amuse the solver! 4.3 stars today.

Some of that interesting stuff:

I’ll stop there. I have jigsaw puzzles to do! 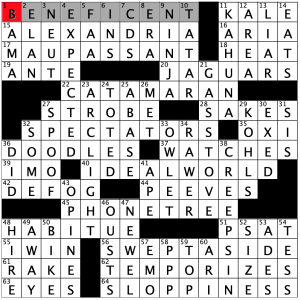 Sorry for the slight delay today, but I had to update my macOS, which took longer than I expected. I finally got a decent time on a Sewell puzzle! I actually thought I might break 10 minutes, but it got a a little tough in the last little bit, which ironically was the NW corner. But I am still wildly happy with this time. Maybe the self-isolation is helping my solving! 4.4 stars for this puzzle.

Everyone have a great weekend, stay safe and healthy, and hang in there!