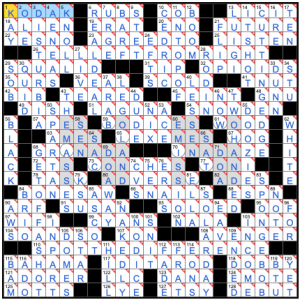 Not sure I quite see what the full theme is here. Aha, here’s the problem. The theme relies on some shading that isn’t reflected in the .puz version I used: “In the print version of this puzzle, there are two 5×5-square areas of shaded squares: one whose upper-left corner is the third square of 57-Across, and one whose upper-left corner is the sixth square of 59-Across.” Good gravy, that’s ungainly. I really wish the puzzle page would tell us when the .puz option will suck. Yes, probably Wordplay had a notice yesterday, but I barely read this crossword blog, let alone any others!

Let’s lay it out:

Strikingly unsatisfying solve in the .puz format, but I acknowledge that it must have been freakishly hard to construct the puzzle with those constraints. Overall, the fill was normal fill (EFTS is among a smattering of musty fill), with some highlights along the way, such as SQUALID, SNOWDEN, IDITAROD, DISTURBIA with a double pop-culture clue (the Rihanna song came to mind first, not that I’ve ever heard it—editing pop-culture crosswords has its advantages!), GET OFF A SHOT, REAL DEAL, SPONGEBOB, CUTTING EDGE, and DOOZIES.

So! I did not get anything out of the theme in the puzzle format I used, but I admire the effort and appreciated the zippy and modern fill. Not a fan of the title—what am I missing? Why “Keep the Change”? I’ll withhold a puzzle rating, but give 1.5 out of 5 stars to the NYT for not making it obvious that only non-.puz formats would provide a satisfactory experience here.

The run of Sunday LATs by women has ended, and it’s still March. Oh, well.

Each theme answer is hiding something. 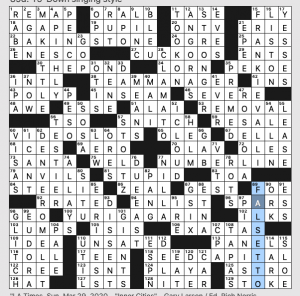 And the revealer: 118a [Startup funds … and a hint to what’s hidden in the answers to the starred clues], SEED CAPITAL.

It’s a fairly solid theme, but…I really don’t like DENVER OMELET, which has another city in it. It’s even a capital city. Yeah, I know, it’s a state capital, not a national capital, but still. And SEED CAPITAL is more often referred to as SEED MONEY. I checked the Google Ngram viewer to be sure, since this is not my area of expertise. Look for yourself. You can click to embiggen.

What I didn’t know before I did this puzzle: that FRANKIE VALLI and the Four Seasons reached #1 with their first two Top 40 hits. I also didn’t know that YURI GAGARIN‘s spaceship was Vostok 1 and I had no idea that MA KETTLE was a character in “The Egg and I.” I know the book, a memoir by Betty MacDonald, and I knew it had been made into a movie. Apparently it spawned the Ma and Pa Kettle series of films.

I leave you with the first #1 hit from The Four Seasons. Dig the tuxedos!

THEME: Four-letter words that can follow the word SPARE are represented by double letters in rebus squares within longer entries. 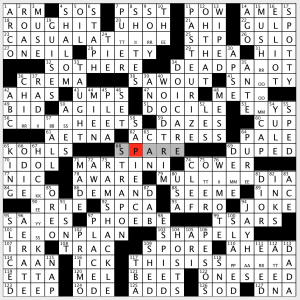 This was an all-around TIGHT puzzle, and a joy to solve. I picked up on the double letter rebus early, but it still took quite a while to fully understand that A) There was a four-in-a-row rebus pattern and B) They were embedded within longer answers. I don’t know why it took me so long to see the latter. Early on, I was almost annoyed when I stumbled on double letters that weren’t in a rebus.

Once grokked, it’s one of those puzzles where the theme helps with the fill and the fill helps with the theme. For instance, if you’re anything like me, you’ve never heard of Jonathan DEMME. And you can’t quite see MULTI–MEDIA just yet. However, you know you’re looking for a four-letter word that can follow SPARE, and you see TI?E. Well… it must be TIME, which gives you DEMME, which gives you MULTI–MEDIA, and whoo hoo! What a feeling!

Nothing much to scowl at and some decent bit in this one. Memorable puzzle indeed.

Some puzzles are for the birds. This one’s for the dogs.

THEME: Phrases that include breeds of dogs are reimagined and clued via dog breed. 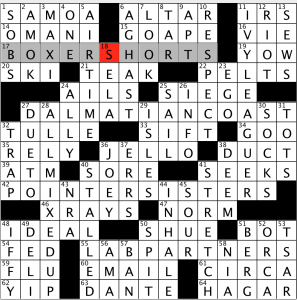 Tight theme and concept. What more can you want from Universal and Lynn Lempel? My favorite of the four themers was the first one. If I had to pick one that felt off, it’d be DALMATIAN COAST as dalmatians are actually named for that region in Croatia. The first word in this type of theme shouldn’t be reminiscent of the actual breed of dog at all, right?

Things got screwy for me in the ALL MIXED UP, X-RAY, JOEY area. I put ORALS in for 46A [Pictures for the dentist], and could not for the life of me figure out the answer to the (very good) clue at 36D [Bouncing baby?]. JOEY. Of course!

Fun theme and a nice start to the Sunday solves! 3.8 Stars.

Not much of a cook here, so not sure I’ll be able to use this puzzle to much avail…

THEME: Ingredients of an apple pie are “mixed” within theme answers. 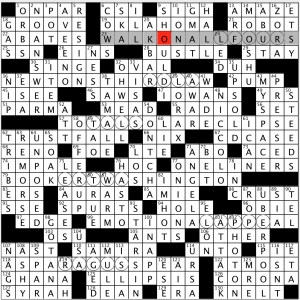 I don’t know about this. I feel like if I followed the recipe as per the title, I’d have a mess. I don’t know how long to bake it for, what kind of dishes to use, how much of each ingredient… I think I’d go nuts with the salt, throw one whole apple in the middle, and forego the oven entirely. Done!

I get how the ingredients are “mixed” in the theme answers, but once I saw the title and read the (spoiler alert!) instructions in the first clue: Unscramble each set of circled letters!, this just turned into a themeless. I didn’t bother to unscramble anything until after I was finished and was listing the theme answers above.

Also, 2D [Reason to leave a message] NO ANSWER is not all that accurate any more! MYSPACE doesn’t exactly help to give it an up-to-date feel either. OH WELL.

And lastly, of course, I wonder how this appears in print since circles are necessary, and Universal can’t pull those off… I assume the solving audience is asked to count letters? Weird.