I like crosswords that have theme entries going both across and down. I don’t know why. It’s more satisfying, or something. This is one of those puzzles – very accessible and mostly Monday-appropriate, and also fun.

The theme answers all have names. 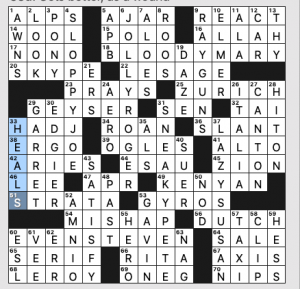 I enjoyed this theme and it’s 90% Monday-perfect. It’s a lot of theme material for a daily-sized puzzle. I don’t think the fill suffers much, but I’m less sensitive to that than some of my colleagues.

What I didn’t know before I did this puzzle: see above re: LESAGE. I also did not know that ZURICH is the largest city in Switzerland. 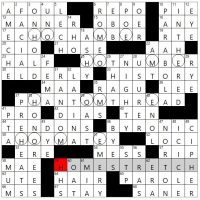 17A: ECHO CHAMBER [Studio feature that produces reverb]
25A: HOT NUMBER [Very popular movie star, e.g.]
37A: PHANTOM THREAD [2017 Day-Lewis film with multiple Oscar nominations]
50A: AHOY MATEY [Talk like a Pirate Day greeting]
59A: HOME STRETCH [Last leg of a race … or a hint to the circled letters]

I really like how this puzzle’s theme was executed, especially in the theme entries the constructor was able to find. PHANTOM THREAD and AHOY MATEY (and its clue) felt current, and they are nice finds for phrases that only have the letters of HOME once each, in the right stretched out order. HOT NUMBER feels a bit more dated, but I’ll take it in an otherwise fun theme with a satisfying revealer.

Anything else I say about this puzzle won’t be as important as imploring you to stay in, stay healthy, and stay socially distanced from everyone so that we can flatten the curve and make sure our hospitals (and hospital workers) don’t get overwhelmed! I’m so glad to be in a crossword community with each of you, and I hope you stay safe so that we can keep solving together!

In these uncertain times, it sure is nice to be able to depend on Patrick Berry to deliver an unfailingly clean, high-quality themeless puzzle every now and then. You see his byline and just know that you are in for a pristine, entertaining 10-or-so minutes of solving, free momentarily from your worldly troubles. Today’s puzzle delivers four, count ’em, FOUR quality long stacks (two 10s and two 10-10-9s). 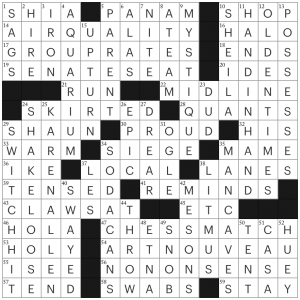 In the NW, we have AIR QUALITY / GROUP RATES / SENATE SEAT. On their own, none of these jump out as particularly exciting long entries, but then Patrick Berry gives us some subtle political commentary with the clue on AIR QUALITY: “U.S. environmental measurement that’s been getting worse since 2016.” I wonder what happened in 2016 that resulted in worse air quality?? ?

Next up, the NE stack: HAND-IN-HAND / OLDEN TIMES / POSSESSES. Again, nothing earth-shattering in there, but some nice misdirection on the clues for OLDEN TIME [Not now] and the S-rich POSSESSES [Takes control of].

The SW stack was probably my favorite: SWITCH HIT / SHAKE LOOSE / KAREN ALLEN. I have seen “Raiders of the Lost Ark” but could never in a million years have told you who KAREN ALLEN was, but that’s definitely on me. I just read her Wikipedia article— she now owns a textile company! The clue on SWITCH HIT [Swings both ways?] is what we call “queer baiting,” where you think something queer is about to happen and then NOPE it’s a sports thing. I lol’d.

Final stack: CHESS MATCH / ART NOUVEAU / NO-NONSENSE. Loved the clue on CHESS MATCH [Board meeting?] and generally enjoyed that corner. It’s also where my funniest mistake happened. I read the clue [“My Best Girl” musical] and had _AME, and thought “What other musical could possibly end in _AME other than fAME?” and ended up with fAN CAVES instead of MAN CAVES and thought yeah, that could be a thing I guess. And moved on. And didn’t correct it until 2 minutes after I finished the puzzle and was hunting desperately for my error. I lol’d again.

Overall, this is a lovely themeless puzzle with a little something for everyone, and a reminder that even while things are terrible in the world, we can still take comfort in the consistency of Patrick Berry’s construction. Lots of stars from me!

Theme: Idioms are presented in a literal, visual, fashion. 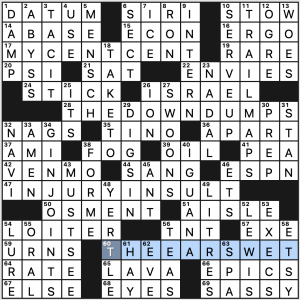 This was a lot of fun—just the perfect kind of playfulness I love in a puzzle. Perhaps some solvers aren’t familiar with all of these idioms, but I feel they should be common enough for the vast majority of English-speakers. I especially like that each one uses a slightly different mechanisms to get its message across. This kept the theme interesting and lively throughout the entire solve.

The long fill is fun as well and acts to SERVE UP TRAIL MAPS and features MUST-SEE GIN JOINTS. An IGUANA, a MENSCH, ISRAEL, and YERTLE add to the lively fill. 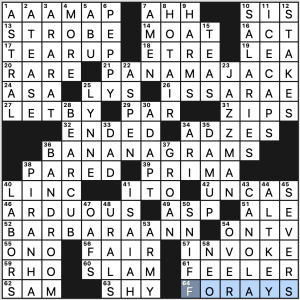 That first entry is definitely not as fun as the others which are all solid and interesting. I didn’t even recognize it as part of the theme until the revealer spelled it out. I think the puzzle would have been fine without it.

I like the theme fine, but that SE corner killed me, leading off with UNCAS [“The Last of the Mohicans” character], which I didn’t know, and ending with the clue for FORAYS, which seems incomplete to me. The full definition I’m seeing is “a sudden attack or incursion into enemy territory, especially to obtain something; a raid.” In my mind, that part about obtaining something is key and is not part of the clue as given. I think of a foray as an attempt to go get something, as in, “I’m going out on a foray to get some toilet paper.” Simply using “sudden attacks” as the definition makes it sound like “ambushes.”

Lastly, the ambiguous cluing in that corner got to me. I wanted TEA for ALE [Brewed beverage] (I must’ve filled in TEAS at 15d by its crosses because it didn’t even register), INVITE for INVOKE [Appeal to], and “FEEL ME?” for FEELER [Tentative inquiry]. Not knowing UNCAS meant I wasn’t going to get CANOLA or ALT KEY. And even though I got ON TV [Being broadcast, in a way] relatively quickly, it still felt highly suspect. In sum, that corner put a damper on my whole solve.

But the long fill is very nice with JAZZMAN, BEAR CUB, BAND ROOM, and PIRANHA. I also appreciate the call-out in the clue for SALARIES [Women’s are still statistically lower]. The short fill, however, feels somewhat strained with plenty of crosswordese: ETRE, ASA, LYS, ADZES, URALS, ITO, ONO, ABU, ARI. These are overly-common entries in crosswords, and when they start to pile up, it’s noticeable.

So I have mixed feelings on this one. The theme is solid and the long fill is sparkly, but some of the surrounding short fill and especially the cluing in that SE corner make it tough for a Monday. 3.25 stars.