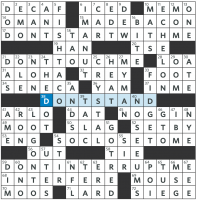 I noticed right away that there were other entries in the grid that had the letters ME, and figured that the themers, even though they began with DON’T, were instructions as to what to do. What I assumed were the first and last portions of the meta answer seemed pretty clear:

I knew I was looking for a ten-letter word that began with MO and ended with OUS. Not MONSTROUS? Not quite.

Okay, at this point I was frustrated and decided to backsolve, so I did a regex search and figured the answer was likely MONOTONOUS. But how did I get there? Friend Austin gave me a nudge:

Yep: MO-NOT-ON-OUS. That’s a ten-letter word that describes the theme entries because it’s a bit MONOTONOUS, I suppose, to keep telling people DON’T.