If you enjoyed Trip Payne’s Fireball “Cuckoo Crossword” (aka a “Something Different” puzzle) on April Fools’ Day, have we got a treat for you! ACPT champ Dan Feyer has taken the time to make .puz files of a bunch of these wacky puzzles that were published in Stan Newman’s crossword newsletter from 1985 to 1994. You can read about the puzzle collection and download the files here. Big thanks to Dan, and to Stan for granting permission. 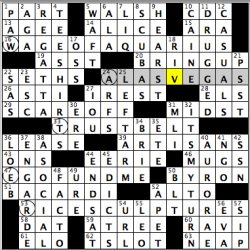 Hello there, everyone. Here is hoping you are doing as well as can be to start the month.

Today’s crossword puzzle ends up taking on a little water, as proper and common nouns are altered by adding a letter to the very beginning of each. The five additional letters added, going from top to bottom and circles, spell out the word WATER, and the final down clue, SIP, clues us in on the gimmick (57D: [Drink daintily, as the beverage revealed in the grid’s “bubbles”]).

Seeing LEFT ARM in the grid made me sigh, for the fact that I was born left-handed and could write very well before my parents intervened, for religious purposes/overall stubbornness, and make sure I wrote and did other activities with my right hand (25D: [Southpaw’s pride]). I still do a lot of things with my left hand, including open plastic bottles and bat/shoot left-handed when playing baseball or using a hockey stick. It’s almost certain that my parents’ intervention caused the funky way that I hold my pens and pencils, with the tip of my thumb tucked inside, in between the pencil and my index finger. Weird, but I guess I would have never won the ACPT Best Handwriting Award a couple of years back without that change, huh?!

Just in case there was not enough LIQ. (7D: [Vodka or gin, for short]) in the puzzle for you, we also have BACARDI mixed in, as I’m sure enough people are ordering as much spirits as possible to stock up for this extended period at home (51A: [Brand of rum]). Haven’t heard IT’S MY TURN in a while, so much find it on YouTube now and give it a play after finishing this blog entry (32D: [Hit song for Diana Ross]). Here is hoping that I do not become ASOCIAL after this period of social distancing is over (38D: [Like a loner]). There are enough introverts who are just fine with that, but I definitely am a 100 percent extrovert just faking it for the time being that I can also fit in to the introverted lifestyle!

“Sports will make you smarter” moment of the day: ONS (43A: [Carry-___ (some luggage)]) – The past year and a half saw a breakthrough in women’s tennis by ONS Jabeur, the 25-year-old Tunisian who, this past January, made her deepest run in a Grand Slam when she made the quarterfinals of the 2020 Australian Open. Jabeur, who is Muslim, was able to crack into the top 50 of the world rankings as a result of her run into the last eight in Melbourne, making her the first Arab woman to ever crack the top 50 in the world in singles. 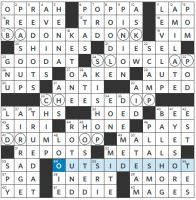 Each of the theme entries’ outside circles spell a type of athletic shot: bank shot, slap shot, chip shot, and drop shot. This is a great theme (for as much as I understand about sports!) and feels like a tight, well-crafted theme set. I also appreciated how fresh this puzzle felt. Aside from the theme entries, we have AIR RAGE, TRUE DAT, BALL HOG, and LEVEL UP. Also, some fun with the cluing, including [She has her OWN network] for OPRAH, [Shell variety?] for DIESEL, and [Eve in “Killing Eve,” for one] for SPY. There was a bit of crud in the grid (LATHS, LOOIE, REPOTS), but it didn’t detract from the fun solving experience for me. I didn’t recognize the constructor’s name, but I’ll surely be on the lookout for their future puzzles! 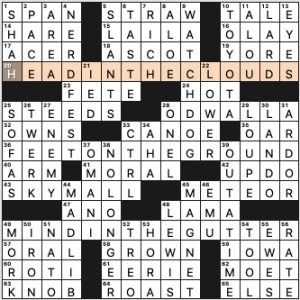 Simple and cute theme, proceeding from top to bottom:

The fill and cluing tends more to the male end of the spectrum, with Fred’s ASCOT, Dalai LAMA, Mr. Moneybags, the brothers ALOU, the Joker and Batman, LANDO Calrissian, and Robin Williams, offset only by LAILA Ali and Shari LEWIS.

Fave fill: NERDFEST, WATCHDOG, MAD LIB (even if the singular is technically a bit bogus). Could do without TREO, forevermore.

3.8 stars from me. Stay home and save lives, friends! 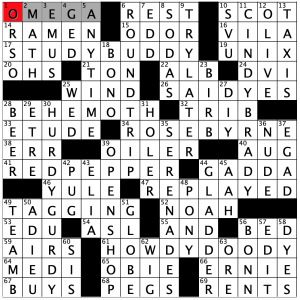 I am not sure what the inspiration for this week’s Jonesin’ title and theme is, but it is either self-quarantine based or a nod to the new James Bond movie No Time to Die, which may or may not come out in 2020. Or, as a third option, the true meaning is something I am not familiar with, which is likely the case! What we DO have are phrases with two 5-letter words that both end in -DY:

Screen capture of the opening theme of “The Brady Bunch”

Needless to say, I think this is one of the rare, if not first, occurrences of CINDY BRADY in a crossword! Definitely no NYT hits. But a great clue and makes me think of watching the TV show years ago! Is this on TV somewhere still? I’ll bet it is; if only I had the time to look it up! ;-) But alas, it is time for more coronavirus news briefings! 4.4 stars today. 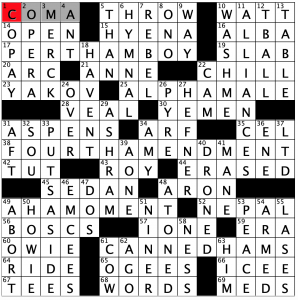 I tried to hurry on this one, and my time was well under three minutes. I am ready for the next online puzzle tournament! I think this may be the Indie 500, and according to their site, there is no date yet, but I am sure this blog will spread that news immediately after it is known. But for now, we have a puzzle with the standard LAT revealer at the end at 61A:

Is this them making you crave some Spam? Yeah, me neither, but it is making me slightly hungry! But most things do, so that is not anything spectacular for me. I hope you are enjoying solving crosswords during this stay-at-home time, and this one was a nice easy one to relax with. 4.3 stars from me.