This week, we are informed that “the answer to this week’s contest crossword is an 11-letter answer.” Okayyy, that’s a little recursive? Is there something to that? 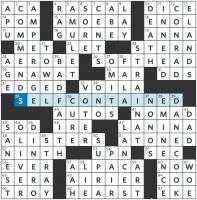 I made short work of the grid, and noted that the center entry …

… was likely important. What does self-contained mean in the context of this puzzle? I thought, maybe there are letters “contained” by the letter I? or other letters “contain” the letter I (i.e. the “self’). Meh. I then set the puzzle aside for two days. Not feeling inspired, I asked Austin for the tiniest nudge, and he mentioned that the clues had a role to play. Was that where I was to “look inside”?

Ah! I knew some of those clues were weird. The first one I noticed was:

(Not all of “our” ancestors likely hailed from medieval Europe, but that’s neither here nor there.) Then, because I just happened to be messaging with my friend Ken Stern, I noticed:

Essentially, we need to “look inside” the clues to find their clued entries SELF-CONTAINED within them, like so:

Those all spell out RUSSIAN DOLL, which is our 11-letter answer. Also known as a matryoshka (Russian for “little matron”) doll, a RUSSIAN DOLL is also SELF-CONTAINED, in that it contains increasingly smaller versions of itself.

This was fun! But as Nadia Volvokov says, “Fun is for suckers.”