Peter Ritmeester of PZZL.com (who used to handle the old NYT crossword applet) in Amsterdam has just assembled a miscellany of printable puzzles and online apps, including crosswords (from Gail Grabowski, Stan Newman and Fred Piscop), logic puzzles, sudoku, and word searches for kids (from Helene Hovanec). You can access them all here.

This week’s AVCX puzzle is a contest puzzle – we’ll have a post up explaining the puzzle once the entry period closes. 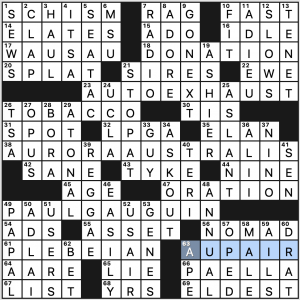 A straightforward-enough theme that works, yeah? Like I said, it’s unusual to have a short six-letter theme answer, but it fits the bill and makes for a good symmetrical partner to the revealer.

I’m puzzled by the title, though. AU PAIR is clued as “Live-in help” and I guess the “pair” is what gets us the two-word title. It’s a bit of a stretch. (The term actually translates to “on par” indicating that the helper is an equal in the family unit.)

Elsewhere, I’m not finding a lot of sparkle other than REGGAE, PAELLA, and maybe TOBACCO. The puzzle doesn’t seem too theme-heavy so I wonder if some grid rearrangement might have allowed for more interesting fill. Maybe, maybe not. But we do get a fair amount of crosswordese like ALII, ASLANT, ELAN, ADLAI, AARE, ELATES, and ITSA.

I like the theme fine, but the fill feels like it could use a little oomph. 3.4 stars. 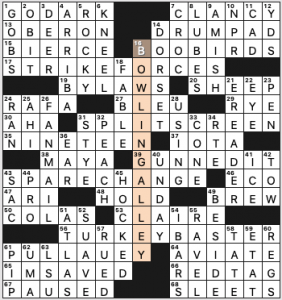 We’ve had bowling themes before, and possibly ones similar to this. But this theme’s intricately constructed—BOWLING ALLEY down the middle, crossed by four phrases that begin with bowling terms. Slight demerit for STRIKE, SPARE, and TURKEY being score things while SPLIT is the layout of un-knocked-over pins (though the revealer clue says they’re all rollable). Here’s the theme set:

I actually went bowling this winter. I was terrible.

I thought the theme was based on country names that, when you lop off the first letter, give you a well-known person’s first name. But it’s tighter than that. A glance at the title informs us that it’s limited to just African countries. 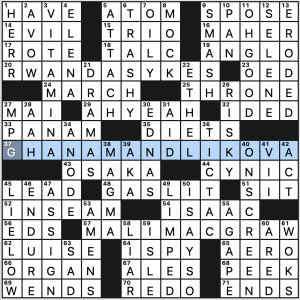 I don’t know what it could possibly mean to have an individual be “nationalized.” I guess here it means having a letter added to become the name of a country. Can you think of any non-African countries that this would work with?

Pretty tight theme. I had a glance at other African nations and couldn’t come up with any others, except of course, Enya and Kenya. But unless you knew that Enya’s anglicized last name is Brennan (in Irish it’s Bhraonáin), you probably wouldn’t have enjoyed that entry. I certainly didn’t know that.

VITAMIN A (had to wait for the cross to get the last letter) and ON SCREEN are our long Downs today with a cartload of 6s sprinkled throughout the grid. How did you do with your OH GOOD and AH YEAH? Do you consider that a dupe? I’m okay with them because I like the clues [“Phew!”] and [“That’s more like it!”] respectively. 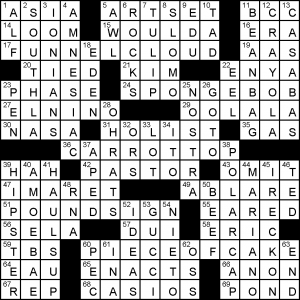 Appropriately, today was a rare sub-3-minute solve for me. The theme is PIECEOFCAKE, and four answers start with words that satisfy “___ CAKE”: POUND, CARROT, SPONGE & FUNNEL. A fairly standard theme design, but well-executed with interesting answers. I wasn’t 100% sure of what a funnel cake was, but it’s American. As a red (auburn) head, I can confirm that if your name is similar enough, you just get called “CARROT”.

An early week theme, and although the puzzle is blocked off it has big stacks for an early week puzzle. The answers are a mixed bag, BEANBAG, CRAYOLA, SOUTHLA, HIPSTER and IRECKON balanced by hoary things like IMARET and IONIANS.