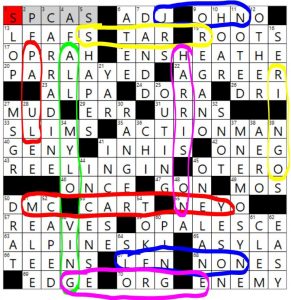 Title: “Breaking Up Is Hard to Do”
Prompt: The meta for this puzzle is a song from the ’60s
Answer: “All My Loving” by the Beatles

My perfect year is gone in April! Egads. I’m a little bitter about it since I think my answer is worth consideration as a correct alt-entry, but 240+ people got Pete’s answer and only about a dozen got mine, so could be sour grapes. Let’s see what happened…

Solve was fairly tough; in the end I was happy to clock in at under 10 minutes. Took me way too long see that [Salt partner] at 2-D was PEPA (this is a music puzzle, keep in mind) or that the five-letter [TV personality who has hosted Mariah 22 times] is the hardly obscure OPRAH at 17-A.

Anyway, on to the meta: didn’t take me long to spot the first three pieces of the puzzle, which were the names JOHN on the top row, split among ADJ (cleverly clued to music as [“God Is ___” (Pink song about dancing through life)] and OHNO (for some reason not clued to the great Commodores song), and then RINGO hidden among SERI and NGOS along the right edge, and then GEORGE on the bottom row among EDGE/ORG/ENEMY.

Was then surprised not to see PAUL along the left edge, which would have completed the pattern, and was trying to remember which song had the “Paul is dead” line. But then I noticed PAUL hidden one row in from the left edge, between that PEPA entry and ULEE. And then a big “whoa!” moment when I saw the nine-letter MCCARTNEY hidden with extreme elegance in the middle of the grid, divided among DMC, CART, and NEYO (nicely done there!). HARRIS and ONA yielded HARRISON in the grid’s 10th column, and then I finally spotted STARR lurking in the second row, camouflaged nicely among LEAFS, TAR, and ROOTS.

But LENNON was nowhere to be found, and –aha! There’s my answer. “Nowhere Man,” one of John’s minor masterpieces. Wasn’t a 100% click, but it made sense…until another look at the grid dealt a serious blow to that theory, since LENNON indeed hides among LEN and NONES on the grid’s penultimate row.

So now what? There must be a song title that explains this mechanism cleanly enough to be the meta answer. I first thought of “Here, There, and Everywhere,” which vaguely but not convincingly describes the names strewn about the grid. So I began to leaf through Ranker’s list of Beatles songs until one made sense: “Come Together.” The pieces do need to come together through black squares to make sense, but still only about a 60% click. But then I looked back at the puzzle’s title: “Breaking Up Is Hard to Do,” and that bumped it up to 90% confidence. Still wasn’t a lock, but I couldn’t find a song that made more sense, and the dichotomy of “Breaking Up Is Hard to Do” and “Come Together” convinced me it was right. I let it sit for a while, but became confident enough that I even looked through 8-10 covers of “Come Together” to see which was the best to post with this review. Then I sent my answer in, and was surprised when my name didn’t show up on the board!

I received a note from Pete telling me to look for a song title hidden in the grid, and quickly spotted contest answer ALL MY LOVING in the fourth column.

Here are the thoughts on this meta that I e-mailed Pete:

2) If I had seen All My Loving I would’ve known 100% it was correct — actually, would I have? The reason being…

3) I didn’t look for anything else in the grid since I thought, hiding all 4 Beatles’ names broken up in the grid is a complete idea, and fits with the title. So looking for another broken-up entry as the song title/meta answer never entered my head. It seems as though the answer had to be derived from the fact that the 4 names are broken up on the grid. With answer ALL MY LOVING in there as well, the four names in the grid are superfluous — you could just have seen ALL MY LOVING in there and entered that way. Finding the four names might help in some auxiliary way (like narrowing down which part of the grid the song title would be found in) but finding those 4 are not essential as far as I can see to the meta.

4) So might’ve been a case where being a meta constructor was very unhelpful, since I didn’t think to keep looking for a song title in the grid after I’d found the names

5) It’s certainly not an unfair meta, but…

6) It’s also not one of my favorites 6b) which is an opinion tinted with grapes that are sour, though I was 80-90% sure of my answer when I sent it in, which is kind of uncomfortably confident

So my perfect year is done, but a couple of hundred of you have yours intact. I am envious! But I’ll be back in May to climb back on the victory train.