I liked most of the theme of the puzzle. Most of it.

The theme entries have progressively larger flows of water. 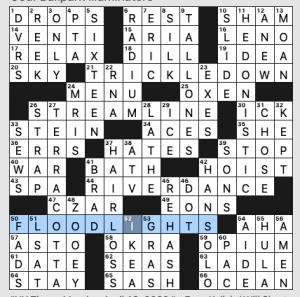 It’s a smooth, consistent theme, and the increase in size as we go down the grid is a lovely touch. I liked it! And then I saw 62a [Sizable bodies of water], SEAS, and 66a [Massive body of water], OCEAN, and I looked back at 1a, [Minute bits of water] – DROPS. Those three answers also progress down the grid from tiny to enormous, and the four longer answers fit in between DROPS and SEAS, but the cluing is so different that they seem to have come from different puzzles. Two clues that directly reference bodies of water and another that has the word “water” take away the enjoyment of discovery I had from the longer entries. If we’d started with DROPPER and ended with OCEANIC, that would have been great. This is – not.

What I didn’t know before I did this puzzle: it’s Monday. I got nothing. 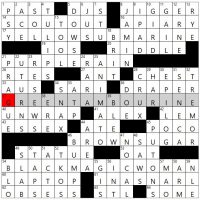 To celebrate spring, we have quite the vibrant collection of song titles in today’s Monday LAT:

It was cool to see that there were a symmetrical set of colorful Top 10 hits, and it made me wonder what red, blue, or orange songs people might be able to come up with. Comment below! And, aside from the last theme entry, the only woman in the whole puzzle is “NYPD Blue” actress GAIL O’Grady, so here’s to her. May there be more women included in puzzles!

Our theme is tushes at the top. Each theme answer starts with a word that can also mean derrière. 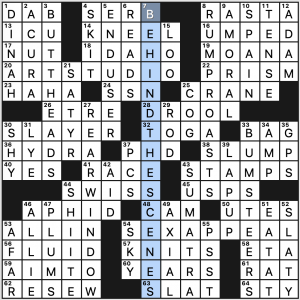 With a title like that, I half-expected some trickery like something flipped upside-down or something turning a corner. But it’s Monday, so this is more straightforward: synonyms for patootie are simply up at the top of each theme entry. Easy and accessible. A good grid for newbies, especially those with a sophomoric streak in them.

Is it coincidence that SEX APPEAL is in a grid about keisters? Throw in a [Lusty woodland god] (SATYR) and the clue [Prepare to peep through a keyhole] for KNEEL, and this is starting to get a little creepy. Maybe back off a bit there; there are plenty of other ways to clue this. In this light, PSST [“Hey! Look here!”] is starting to feel skeevy, too. Maybe I’ll take back my recommendation in the previous paragraph.

There are good entries though, such as SUMATRA, ART STUDIO, END USER, SLAYER (the band), and the mythical crossing of (i.e. the crossing of mythical creatures) SATYR and HYDRA. Could’ve done without ETRE on a Monday, and I’m giving SLATY [Dark blue-gray] the side-eye.

Cluing was straightforward, which is why I had a sub-four-minutes solve time.

Not a bad grid, but I wish more attention would’ve been paid to the vibe it’s giving off, especially with regards to that clue for KNEEL. 3.3 stars.

I definitely felt my own lack of caffeine going into this puzzle. So much so that I actually paused it and got my coffee and gave it a few minutes to kick in before finishing it, because I was realllly floundering. Looking back at it with newly caffeinated eyes, I can parse words that were breaking my brain fifteen minutes ago. For instance: I was parsing POVALLEY as POV ALLEY (the same as one parses DIAGON ALLEY) and could not figure out what POV was or why Natan had included such an obvious dupe. For the record, I now recognize PO VALLEY through the steam of my freshly brewed coffee mug. 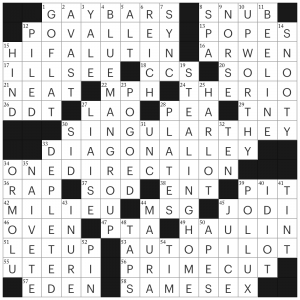 My own brain fog aside, I really enjoyed the vast majority of this puzzle! Opening with GAY BARS is super strong (and nostalgic! Remember when we could go to BARS? I hope Stonewall and Cubbyhole are doing ok…!). I love the central staircase of SINGULAR THEY / DIAGON ALLEY / ONE DIRECTION, all of which contribute to situating this puzzle within its constructor’s voice (someone engaged with queer culture who grew up reading Harry Potter and laughing at the idea of ONE DIRECTION while also secretly enjoying their music). Or maybe I’m projecting? Either way, I think it’s great.

Also really liked the long downs of STEALING HOME and BLUE MAN GROUP, particularly as clued. The Blue Man Group running gag in Arrested Development is solid gold, and I’m overjoyed to have been reminded of it here. The pun on STEALING HOME (Pulling off the ultimate diamond theft?) is very clever.

Overall: Excellent puzzle [and, while it was solidly in my cultural wheelhouse, I think it is well-made and well-clued and would be excellent even if not in my wheelhouse]. Tons of stars from me.

Theme: Phrases that have a word that is also an abbreviation for a country. 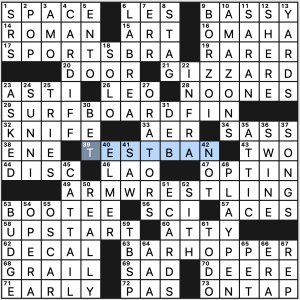 I did not find this theme enjoyable. Between the unknown (to me) city names and the change-up of countries coming first in the entry, it was all a bit befuddling. I guess upon reflection, the entries aren’t as awkward as I was thinking they were because I was confused, but it was the puzzle that confused me in the first place, so I don’t feel I’m entirely at fault here.

More geography in CARDIFF. I like the city and the entry, but in such a geographically-centered puzzle, maybe it’s too much? Other highlights: AMAZONS, CATTAIL, PLAYPEN, GIZZARD, UPSTART, “REALLY?,” and BOOTEE. On the questionable side is BASSY [Heavy on low notes], and yet another proper name I didn’t know: SHERE [Sex researcher Hite]. Also tough: BORZOI [Russian wolfhound].

Bottom line: This is a tough theme with all the rarely-heard-of city names. Maybe it’s not possible, but consistency in the entries would have prevented confusion in at least one solver (me). Three stars.