Back when I was a project manager in the Air Force, we used the initialism OBE a lot. It didn’t stand for Order of the British Empire or Out of Body Experience. Instead, it meant Overcome By Events, as when an activity requiring a decision to be made is rendered pointless due to external extenuating circumstances.

In some ways, I’m feeling this puzzle is OBE since Tax Day was officially moved to July 15 due to the pandemic. It’s nothing to do with the puzzle itself, it’s just now kind of odd to have it on April 15 when the actual Tax Day isn’t for three more months.

But be that as it may, we still have a taxing puzzle to look at. So what’s going on?

Well, to be honest, I’m not 100% sure. We have entries with various parts of the word TAX in circles. Let’s look at the entries first and then try to interpret them. 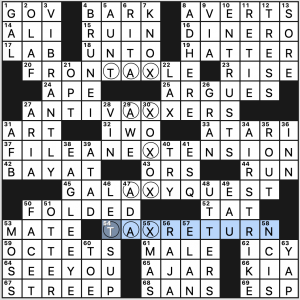 How to interpret this? On the surface it just looks like your TAX is decreasing and then it’s increasing again. But based on the title, I guess we’re taking deductions from the TAX we owe up top and then it’s getting returned to us down below. I guess? It’s not totally clear.

And I’m not sure what to make of the fact that the Xs in all these entries are lined up in the middle column. I guess it just makes it more visually obvious that TAX is being deducted and then returned. Again, I’m just guessing here.

Top fill: EAGLE EYE, AIR STRIKE, and BRUNEI. (Just noticed how Air Force-centric this fill is with EAGLE (i.e. the F-15) and AIR STRIKE and AFB at 31d.)

One clue of note: 66a. [Stinger seller]. KIA. I don’t recognize this vehicle, but I guess it’s been around for a few years now. Any Stinger drivers out there?

So what’s the bottom line on this grid? It’s just an odd duck to me. First, it’s not Tax Day. But second, TAX is such a short word to do this with that the vast majority of the theme letters are superfluous. Lastly, it’s just not crystal clear what’s going on here, and the visual isn’t all that effective. Maybe it needs something like the IRS up top and YOU down at the bottom. I don’t know, but I think it needs something to make it clear that Uncle Sam is getting less and you are getting more. If I’m missing something please feel free to let me know in the comments. 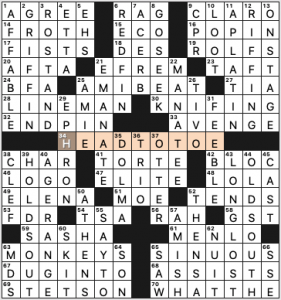 This 15×16 puzzle with left/right symmetry has a theme revealer in the middle: 34a. [Complete … as literally suggested by the four symmetrical pairs of answers to the starred clues], HEAD TO TOE. There are four pairs of entries, all running in the Down direction, and the first letter (the “head”) drops down to the end (the “toe) to form another legit entry:

When you have all these stacked 7s and 8s along with the constraints of having nine theme entries, you end up with an awful lot of compromise. Entries that held no delight for me included CLARO, ROLFS, AFTA, EFREM, ENDPIN (“WHAT THE…!?”, indeed), RAH, GST, MENLO, plural EHS, REDFIN (clued as some fish I don’t know rather than as the real estate company I do), SAY TO, and that dangling GO SEEK. 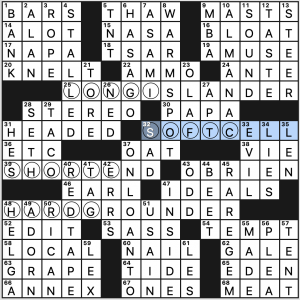 I still feel like I’m missing something. I keep looking for a revealer telling me what the puzzle is trying to get me to pronounce (it claims to be a guide after all). But if you make the sounds as described by the theme answers, you get something close to “ice egg”…which isn’t a thing as far as I know.

Check that. Apparently ice eggs are a thing. See this news story about ice egg formation and when they’ve been washed ashore en masse in recent years.

But I really don’t think that’s what the puzzle is aiming for. I suspect there isn’t an actual word or term we’re meant to pronounce which is unfortunate, because that would’ve been a really nice touch. But I’m thinking the constraints might be too difficult to pull this off. After all, only vowels can be long or short, and only the letters C and G can be hard or soft. And of course you’d have to have specific well-known phrases that fit symmetrically in the right order to have the desired effect. So yeah, I don’t think it’s possible.

Still, it’s a little weird to have a puzzle titled “Pronunciation Guide” which doesn’t have a pronounceable over-arching answer. But I d0 like the idea here.

In the fill we have RED TAPE, a RARE GEM, and a WARM SPOT. STALLED and ALMANAC are fine, but ON LOAN TO feels like a missed opportunity to put something more interesting in a marquee position.

I thought this was a creative and interesting theme. (And I think it’s a debut, so Congrats on that!) But it set me up to want just a little bit more from it. 3.8 stars. 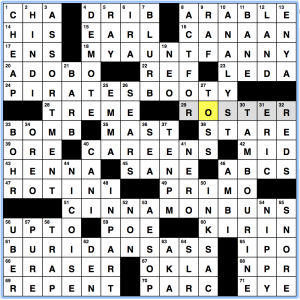 This week’s AVCX puzzle pairs nicely with Byron Walden’s puzzle from a few weeks ago, for reasons that are apparent from the title (“Rear-ended”) and the theme entries:

I got briefly stymied before I figured out what was going on because I assumed our decision-making paradox was the TROLLEY PROBLEM and the breakfast treats were CINNAMON ROLLS, both of which are too long for their respective grid spaces, but DO have ROLL, so I thought we had some kind of rebus situation happening.  Nope!  It’s CINNAMON BUNS and BURIDAN’S ASS, which is where you place a donkey between a pile of hay and a pail of water and let chaos ensue.

Lots of great food/drink clues in the fill today: in addition to PIRATE’S BOOTY and CINNAMON BUNS from the theme, there was Sha CHA Chicken, the ADOBO sauce that chipotle peppers are canned in, ROTINI, KIRIN beer (which is made by Ichiban but brewed outside of Japan), chocolate ASSORTMENTs, the crossword-ubiquitous OREO, and salad NICOISE. 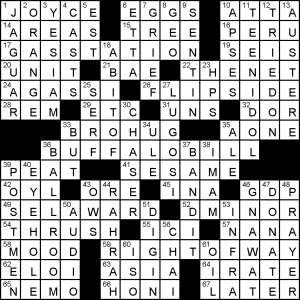 It’s “words that go with” Wednesday again at the LA Times. Today’s word is WAY, and it is signaled with a more intricate revealing answer than is typical: RIGHTOFWAY. Put “way” in front, i.e. to the left, of STATION, SIDE, BILL and WARD and it makes four other words.

Best bits: I’m not sure what a BROHUG is, but I’ve probably seen one? The clue for POSTMEN as [Male carriers?] which is a tad awkward, but also very clever.