I love the title on this one because it’s perfectly apt. We are literally making AM-ends as we write in the theme answers. Each one is a well-known phrase with an added AM at the end. 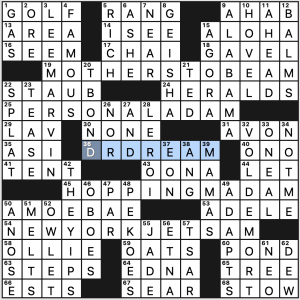 Nifty theme that works because the title works so well. I didn’t find any of the entries to be lol-funny, but they were clever enough and none of them felt forced. Nice job.

My time was much too long because I got hung up at 22a STAUB [Original Expo nicknamed “Le Grand Orange” by fans] crossing 20d T-BOND [It takes years to mature]. It also didn’t help that I had HOLE at 1a [Round activity] for much of the solve instead of the correct GOLF.

LEE MARVIN and VOLDEMORT comprise the marquee long fill answers and they make for a good pairing. One for the older crowd, one for the younger. We have a case of THE YIPS at 42d which, not being a GOLF watcher or player, I only know from crosswords. I could do without OONA and plural PEKOES, but most everything else fell within the norms for a standard puzzle these days.

Excellent use of a title to drive the theme. Good puzzle. Four stars.

There’s a lot going on in this Thursday’s grid, and more than I initially thought when I thought I had cracked what was going on.  It started out with three sets of paired clues: 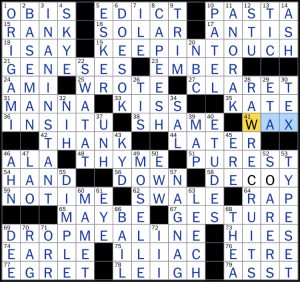 I saw these and figured, since each had two black squares between the two words, the ME missing in each phrase (KISS ME KATE, THANK ME LATER, and HAND ME DOWN) was somehow represented there.  Not so!  One part of two seemingly identical clues reveal what’s going on:

All of the MEs have dropped a line, making words that make sense in the grid, but don’t line up with their associated clue’s answer:

Once I saw the full picture of what was going on, I was impressed.

One final note: I have never encountered the phrase “RAW RECRUITS”, even in the context of being new in the work force.  Is this actually a thing?

I’ve lost track of how many Fireball crosswords by men we’ve seen since we last saw one with a woman’s sole byline. Peter certainly has the right to publish his own work, which I usually enjoy (not so much today. More on that below) and he certainly could do more to publish women when he’s not running his own puzzles. The last time I mentioned this, he Emailed me and said he’d love to get more submissions from women. Since that seems to be all he’ll do to reach out while other editors (Ben Tausig at AVCX and Erik Agard at USA Today, at least) are doing more, I’ll repeat it here and link to his spec sheet.

On to the puzzle. As I said, I usually enjoy Peter’s puzzles, including his themelesses. I want the Fireball to be “blazingly hard.” This one was almost impossible, and not in a good way. 5d [Top R&B Artist at the 2019 Billboard Music Awards] crossing 24a [Beastie Boys bandmate of Mike D and Ad-Rock] was an absolute Natick for me. I solved it through brute force – I entered every consonant in the alphabet until I got Mr. Happy Pencil. I do not object to pop culture in my puzzles. Both of those are completely legit entries. ELLA MAI is a big deal in current music and the Beastie Boys are iconic. It’s a lacuna in my knowledge base and one my brother would be horrified by. I admit that. Everyone has lacunae, and that’s why entries like that should be crossed with words that are accessible to people who don’t know pop music unless it’s in a specialized outlet. MCA is (or was) also a record label. I know Peter doesn’t like to repeat his own clues, let alone anyone else’s, but sometimes a man’s gotta do what a man’s gotta do to make his puzzles enjoyable. 29d [Hip-hop hit for Petey Pablo] was also new to me and also has pop culture crossings. Luckily I’m old, so I know the songs compiled on OLE ELO, and remember bad movies from my college years, which gave me PORKYS. (Petey Pablo recorded FREEK A LEEK).

Well, that’s a long couple of paragraphs of ranting! Here’s the grid and a few other things: 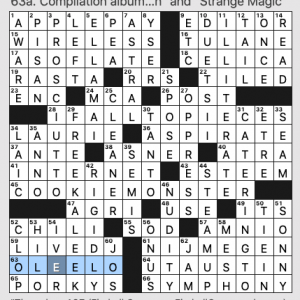 A puzzle that’s both out of this world, and yet also the complete opposite of that…

THEME: Phrases where the word EARTH is hidden in the middle. 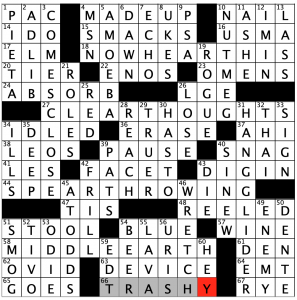 I enjoyed this one, though in retrospect I didn’t know SPEAR THROWING was a thing! CLEAR THOUGHTS seems a bit vague too now that I think about it, but neither of those bothered me mid-solve. Also, I love the phrase NOW HEAR THIS! It’s so deliciously old-timey.

I do take issue with LGE being an acceptable abbreviation for “large,” but I’ve seen it in crosswords before. Not the puzzle’s fault! 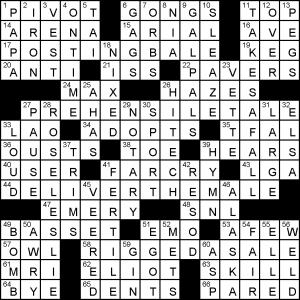 Yesterday’s clue for POSTMEN provides an odd segue to today’s puzzle, which features pairs of AIL/ALE homophones being substituted. PREHENSILETALE and DELIVERTHEMALE were definitely strong entries, and I also appreciated the consistent way the theme was executed.

Things I don’t recall seeing before: ISS clued as the space station. TAI clued wrt sushi, also haven’t heard of this, but northern fish species are not common here. I haven’t heard of ROSELESLIE the actress before, and if I had only had half their name I wouldn’t have been sure how to assemble it!

Final note: I wonder if FARCRY was originally intended as the video game, but was clued to be more accessible, if somewhat awkward to clue.