This month, Peter asks, What 14-letter word is hinted at by this puzzle? 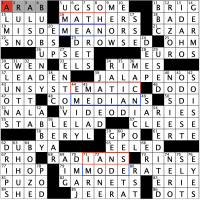 What indeed? That was a pretty tough grid — definitely some sloggy bits. Then at first, I was hung up on all those long themers: MISDEMEANORS, UNSYSTEMATIC, VIDEODIARIES, IMMODERATELY. Took a nudge from solving pal (and occasional ringer) Jeremy to consider the title more closely, and it popped out at me. There are three themers —

The mean is calculated by adding a set of n numbers and then dividing that sum by n; the median is the middle value in that set where half of the numbers are above and half are below that value; and the mode is the most frequent value in the set.

For the next step, if we look in the grid “above average” as the puzzle’s title suggests, we see the strings MATH (above MEAN), EMATIC (above MEDIAN), and IANS (above MODE), giving us MATHEMATICIANS —  a fourteen-letter word and our answer.

you can’t spell meta without meat