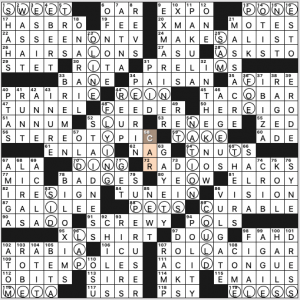 This puzzle kept my interest the whole way through, which doesn’t happen in most Sunday-sized NYTs. The theme is neat, apparently inspired by road tunnels in Switzerland’s mountains. The two-part revealer is 47a. [With 86-Across, fixation problem suggested by this puzzle’s theme], TUNNEL / 86a. VISION. There are eight L-shaped “tunnels” of black squares, and 58d. [The driving force behind this puzzle?] is a CAR that drives through those tunnels. The clue for each full tunneled answer goes with the space where it starts, and the post-tunnel portion gets a legit clue for just that portion. Each portion before and after the tunnel is a legit stand-alone entry, but the first entry segment doesn’t make sense with the clue. I’ve circled the theme entries in my answer grid.

Moving along from the theme, what else caught my eye? These:

Four stars from me. How’d the puzzle go over for you?

This puzzle actually needs the circles. I wasn’t happen to see them when I opened the puzzle, and in the end I didn’t mind them. We didn’t have a tag for Jessica Zetzman. Is this a debut? If so, well done! I look forward to more.

Each theme answer has a set of circled letters that spell a word. They also have asterisks in the clues, which seems unnecessary, but now I’m just being cranky. 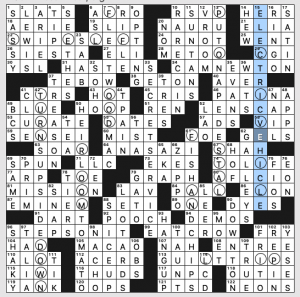 What do the hidden words have in common? We find out at 33d, [President’s protector … and a hint to the circled letters] – SECRET SERVICE. All the hidden words combine with SERVICE. FAN SERVICE didn’t ring a bell with me, so Wikipedia to the rescue: it’s “material in a work of fiction or in a fictional series which is intentionally added to please the audience.” Glad I learned that! The theme is solid and made for a pleasant “aha” moment.

What I didn’t know before I did this puzzle: that NAURU is the world’s smallest island nation.

I don’t always do Sunday-sized themelesses, but when I do, they’re Evan’s. He tends to pitch his puzzles a bit harder than the NYT, which is a good thing. This one was mostly smooth with a couple of crunchy spots. Perfect. And now I want peanut butter. 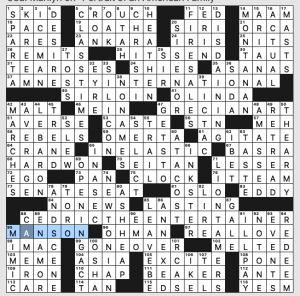 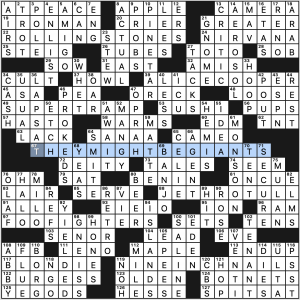 I have to admit that during the solve I wasn’t pausing long enough to make the connection between entry and clue. I mostly relied on crosses, and once the entries started to take shape, I filled them in fairly easily. That said, looking back, I like the theme and the title as well. There are some inconsistencies that could be ironed out, but on the whole, I found this entertaining.

Fill highlights: IRON MAN, MONSOON, and BOTNETS. I also liked PROBS [In all likelihood, slangily]. I struggled with PRO-KEDS [Adidas alternative] and the CELIE /BENIN crossing (mostly because I saw [Neighbor of Togo] and was thinking “Tonga,” the Pacific island nation). SANAA [Capital of Yemen] is one I should commit to memory (but haven’t), and I just realized EDM [Club music genre, briefly] stands for Electronic Dance Music. Good to know. 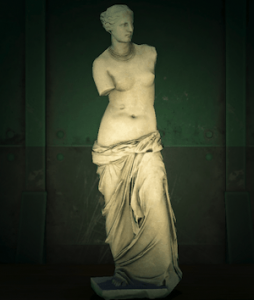 Matthew Sewell and Jeff Chen’s Universal crossword, “By Any Other Name” — pannonica’s write-up 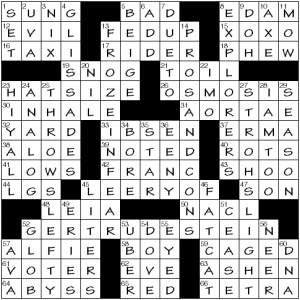 Well, you know it’s going to be ‘rose’. The title references another hugely famous quote about the flower, that one by Shakespeare.

The grid has left-right symmetry and I’m uncertain whether it’s intended to visually evoke a flower.

This doesn’t feel like much of a theme. Four phrases that begin with rhymes of \ˈōz\ ? Plus a name and a three-letter bonus word?

The last across and down clues/entries further echo the theme, with DNA as studied by Rosalind Franklin crossing TETRA [Bright fish] for a fourfold finale.