This week, we’re looking for a band that played at Woodstock that would complete the theme. Hey, how many could there be? Thirty-two? It’s gotta be one of those. 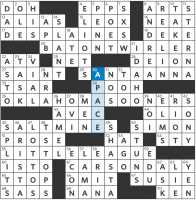 Let’s proceed [30d: Hastily]: APACE by taking a look at those starred themers:

It didn’t take me long to notice that each one of those started with a word that also starts the name of a two-word US capital city, like so:

The band that played at Woodstock that would complete the theme can thus be none other than JEFFERSON AIRPLANE, because JEFFERSON City is the capital of Missouri. This was neat and not too tough, as well as particularly appealing to my classic rock tastes and my liking for music-related metas.

If everything you know about Jefferson Airplane comes only from the sorry travesty into which they devolved in the early 1980s that produced the worst rock song of all time, here they are at their sun-kissed hippie zenith:

If you’ve ever seen the documentary Gimme Shelter, you know that their set at Altamont didn’t go particularly well (cw: nudity, swear words, Hell’s Angels beating people up). As the Grateful Dead sang about it later, “One way or another, this darkness got to give.”