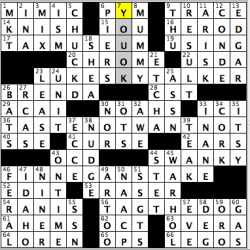 Hello there, everybody. Here is hoping you are all doing well as we quickly find ourselves on the doorsteps of the month of May!

Today’s crossword puzzle takes a little bit of WT off of our shoulders, in a way. The theme entries are puns that are made when taking a well-known phrase/noun and changing a “W” in the phrase into a “T,” reimagining those phrases.

A reference to “Starr” that has nothing to do with Ringo nor Ken is a refresher, giving extra points to the BRENDA entry (26A: [Starr portrayed by Brooke Shields]). I am fortunate to have never stepped on LEGOS before, though some of my friends who are now parents have told me about the horrors of stepping on kids’ toys, including Lego (66A: [When stepped on with bare feet, they elicit screams (your own)]). Though I’m a born-and-raised New Yorker, I have gone a pretty long while since having a KNISH, which might hurt my NYC authenticity down the road (14A: [Savory deli turnover]). Took a while for me to discover the wonders of CHROME, but it has been my browser of choice for about a year or so, replacing Firefox (20A: [Google browser]). We were so close to having a NINER be a player who can be called a defending Super Bowl champion, but that was before the Kansas City Chiefs pulled off a fourth-quarter comeback in February to win the Lombardi Trophy (48D: [West Coast NFLer]). That game was played in Miami and, 27 years prior, the Big Game was supposed to take place in the Grand Canyon State. However…

“Sports will make you smarter” moment of the day: CHUCK D (5D: [Rapper born Carlton Douglas Ridenhour)]) – Do you know the story of how the lead singer of one of the most influential hip hop groups of all time possibly affected where a Super Bowl was played? Well, on March 13, 1990, during its annual owners’ meeting, the city of Tempe, Ariz. was voted as the host of Super Bowl XXVII, which would take place in 1993. However, later in 1990, Arizonas, as required by its state’s constitution, had to approve Martin Luther King Day as a national holiday in the state. Largely because of a confusing-looking ballot (surprise, surprise), the initiative failed, and the massive national backlash against the state was highlighted by the release of the rap song “By The Time I Get to Arizona” by the popular group Public Enemy, whose leader singer was/is Chuck D. At the next owner’s meeting, the NFL pulled the game from Tempe and relocated Super Bowl XXVII to Pasadena, Calif. and the Rose Bowl. In 1992, Arizonas did eventually end up voting for making MLK Day a national holiday in the state, opening the door for the NFL to award Super Bowl XXX to Tempe. 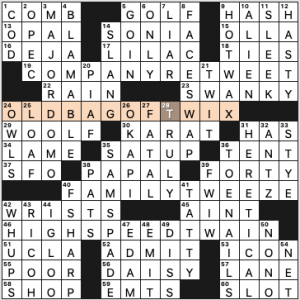 You ever wake up and think “Wow, I slept in, it’s almost 9,” but then you eventually discover that it was actually 7:15 and you should’ve gone back to sleep? So I’m sleepy and don’t want to blog tonight. In brief, the theme changes TR— words to TW— words:

Cute. Outside of the theme, the fill was okay.

Didn’t love seeing “truth” in the AINT clue, so close to TRULY.

*Sigh* A reminder that In-N-Out is not an option in my neck of the woods. Never had it, but I’ve heard such good things! 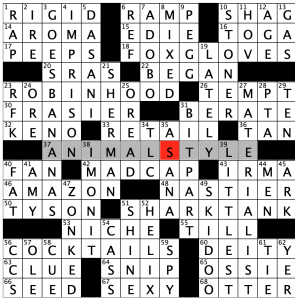 THEME: Clothing and/or accessories that are preceded by an animal name.

Love the revealer, despite having no idea what ANIMAL STYLE is! Let’s google that…

According to Wikipedia: “Animal Style” is one of the most popular “secret” styles; in addition to the standard toppings, Animal Style burgers include mustard fried onto each meat patty, pickles, grilled onions, and extra spread.

Hmmm… “popular secret” seems a bit oxymoronic to me, but hey! I wasn’t clued in ’til now!

Saw the ANIMAL thing happening in the theme, but didn’t really catch on to the  part until after the solve, which led to a nice AHA! COCKTAILS seems like the runt of the theme litter here (aka LITTLEST!) because it’s not two words, and both COCK and TAILS aren’t the first things that come to mind when I think ANIMAL and STYLE.

Overall, very enjoyable! Nice longer answers and minimal crud. New to me were SHERMAN and PEGG. 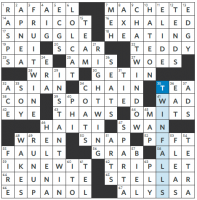 It took me a beat to grok this puzzle’s theme. At first, I thought the revealer meant that both words in each theme entry would have something to do with the word FALL(S), but that wasn’t quite right. It turns out that you should read it as TWIN being a word that FALLS in the four themers. TWIN is hidden in FRUI TWIN E, CHA TWIN DOW, etc. I like it! And I enjoy how fresh and evocative a lot of the theme entries are – it made the solve fun all the way through. I don’t know that I’ve ever seen a not-as-common city be a revealer before, but it at least gave me a chance to learn more about the city/region here. And, as usual, there’s nothing to HATE ON in this puzzle – the fill is smooth and lovely, as can be expected from a Zhouqin Burnikel puzzle! 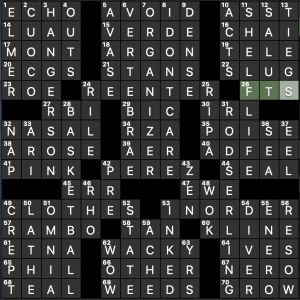 Is the dark image too much? I am trying to see if I like the dark mode in the Black Ink software. You can disable it, but my eyes are shot and I do things in dark mode whenever I can. What do you think?

As far as the puzzle goes, this could be yet another theme inspired by the quarantine period; perhaps Matt is wandering around certain areas of his house!

That is all for now! Sorry for the late post! 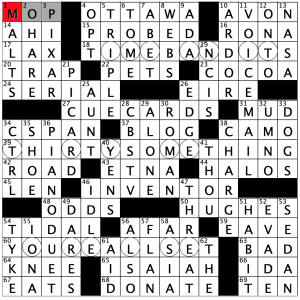 Breezed through this one in under 3 minutes! Did you find it easy as well? The circled letters form a composite message, with a tie-in/revealer included in two down answers:

I see this as one long threat: “I mean it – try me, or else!” I swear someone must have uttered this phrase in a movie at some point! Not the most positive theme, but I am a realist, and this is how people treat each other at times. Nice easy Tuesday. 4.2 stars.

Every have a safe and healthy week!