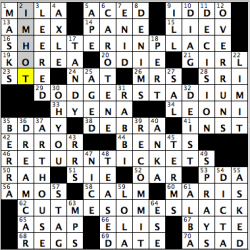 Hello there, everybody. May the Fourth be with you and watch out for the Revenge of the Fifth!

Today’s crossword puzzle could be one that you might have described as taxing. In a way. Each of the four longest entries in the puzzle is a multiple-word answer in which the first word can also come after the word “tax.”

When opening a grid and noticing the number of long entries, one can’t help but be excited to solve, and none of the six eight-letter entries disappointed. No matter the era one grew up, I’m pretty sure a lot of you had a DREAM CAR growing up, and I’ll admit that my first dream car that I had was the DeLorean from Back to the Future (36D: [Fantasy wheels, like a red Corvette]). What was your dream car growing up? And did you ever end up getting it?

The only real slip-up in the grid that I had was initially spelling CAROTENE with a “k” at the beginning of the word (6D: [Beta ___]). If a solver of today’s grid is a New York Yankees fan, this puzzle was for you! First, there’s BERRA, the all-time great catcher and “philosopher” (35D: [Yogi who said “Never answer an anonymous letter”]). Then there’s LOLA in reference to one of the main characters in a famous comedy focused on the New York Yankees baseball hegemony in the 1950s (59D: [“Damn Yankees” vamp]). And there’s the man who many people still consider to be the single-season home run king.

“Sports will make you smarter” moment of the day: MARIS (60A: [Baseball great Roger]) – Here’s a little bit of trivia. Who won the American League’s Most Valuable Player (MVP) Award in 1960, the year before New York Yankee outfielder Roger Maris made history by breaking Babe Ruth’s single-season home run record with 61 homers in 1961? The answer is…

…Roger Maris! Maris’ home run record came a year after he led the AL in slugging percentage (.581), extra base hits (64) and RBI (112) in 1960, winning the first of his back-to-back MVP awards. Not a small feat when considering one of his teammates was baseball great and deity Mickey Mantle! Along with the two World Series titles he won with the Yankees in 1961 and 1962, Maris was an integral part in the St. Louis Cardinals’ run to the 1967 World Series victory over the Boston Red Sox. Maris is not in the Baseball Hall of Fame despite those achievements, a debate that has raged on with baseball enthusiasts for decades.

Thank you so much for the time, everybody! Have a wonderful — and safe — rest of your day and, as always, keep solving! (If I haven’t done it in this space before, let me thank previous CN blogger Janie Smulyan for allowing me to continue to use her “keep solving” tag! Thank you!!) 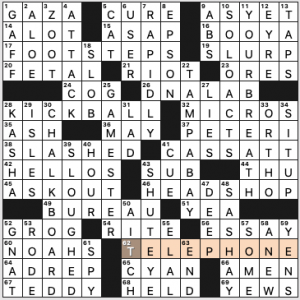 Theme is old riddles, with “riddle-de-dee” in the clues for some reason:

The whole puzzle felt sort of old to me. With GAFF and ZOOT in the opening corner and very few current references in the puzzle (TEDDY , it just felt like this 50-something solver wasn’t in the target audience. With two of the themers being compounds, it also felt odd to have KICKBALL and HEAD SHOP as random fill.

I didn’t much enjoy this puzzle. Three stars from me. 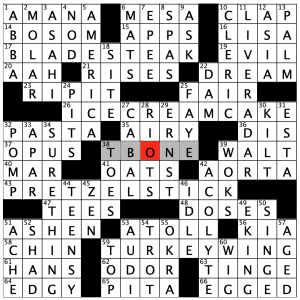 I was excited to see the byline today before solving, and I was surprised when this one fell flat (themewise) for me. That almost never happens with a Burnikel puzzle. While I do like the tightness of the idea (and the title which is referring to the Los Angeles Kings!), it took me a long time to see the relationship between the answers and hockey. I thought the food part of the answer was what I should be looking at- like is PRETZEL a hockey related term? When I realized I should be looking at the other side of the answer and found STICK and ICE, it lost its zippiness. It was also made a bit hazier by the hockey term changing sides of the theme answers. Last gripe is that I would’ve liked to see the appetizer in the first spot rather than the last!

Fill is pretty standard. One of these days I’ll remember the brand of Japanese beer! ASAHI! 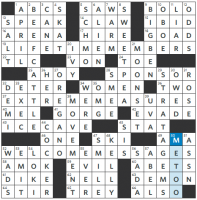 19A: LIFETIME MEMBERS [They never need to renew]
37A: EXTREME MEASURES [What desperate situations call for]
52A: WELCOME MESSAGES [Greetings to new subscribers]

Each of this puzzle’s theme entries has the doublet of ME ME spanning its words, which ties in nicely with the ME TOO (ME x 2) revealer and the “I repeat” (I = ME x 2) title. Nice! What was puzzling about the revealer is that it wasn’t clued with respect to the super current and wildly relevant #metoo movement. I understand a simpler clue of [“Ditto!”] but it seemed like a very conscious editorial or clue writing choice to not reference #metoo.

Another puzzling and super unfortunate bit was the inclusion of [Georgia senator Loeffler] as the clue for KELLY, in light of insider trader revelations wherein she publicly said there was nothing to worry about with respect to COVID-19 while privately trading stocks with the knowledge that it would be hugely impactful and damaging. If the reports are true, she put lives at risk for her own profit at one of the worst moments in our nation’s recent history. To me, that might be a reason to clue KELLY in any of the myriad other possible ways.

Otherwise, this grid was clean and accessible, aside from maybe [Emmy winner Thompson] for SADA, though I was glad to learn of her. Hilariously, this puzzle might have featured the most erasing I’ve ever done in one grid – I was totally off the constructors’ wavelength! From the start, I had orate instead of SPEAK at 13A, etal instead of IBID at 15A, eclipse instead of MOONSET at 21D, binge instead of GORGE at 41A, etc. I wonder if anyone else had the same experience or if it was just me having an off day! Thankfully, there were some clutch downs that helped me lock some correct letters in place, including OREGANO, BEEF CATTLE, and COCKER.

Last note: Hooray for WOMEN as [Voters since 1920]! Yet, it’s important to remember that this was functionally only suffrage for white women. Black women and others couldn’t vote freely and without fear until much later. 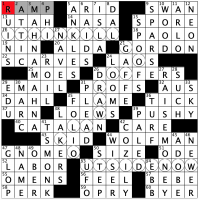 I often read of the disdain for quote puzzles, but this one takes that idea in a different way.

I am not at all familiar with the Brady Bunch song, but no doubt this theme was also self-isolation inspired! If you’re like me, the weather is still horrible outside, especially for May. It is still in the 40s for a high temperature here in northern Indiana. Yuck! Hopefully summer will be here soon! 4.3 stars today. 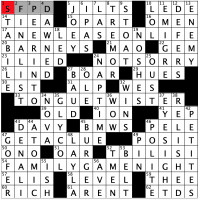 This is a byline I don’t know, but the name is in the database, so this must not be Barbara Lin’s first rodeo. But it is Derek’s first review of Barbara Lin, I do believe! I will be nice, but then again, I usually am!

Have you been digging out board games during the quarantine of the past two months? Then this theme will hit home for you!

Every night is game night now; I am actually tired of watching TV! And you cannot go wrong with the classics shown here, as well as many others (Risk, Scrabble, Boggle, etc.) Maybe I will teach my youngest how to play chess! Hope you’re finding some way to stay sane through all of this, other than by crosswords, I mean! 4.5 stars today.

Have a happy and healthy week!