Super quick post tonight! Use your imagination to fill the post with witty ripostes; I’m fresh out, post-weekend.

This week, Mike would like us to find a(n) historic monarch.

No marquee themers, but given that the title is “King Me!” one would expect that this entry:

… might be important. And indeed it is — right underneath that entry we find:

… and up in the northeast, there’s: 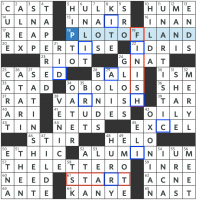 How do checkers move? Diagonally! (Pretty sneaky, sis!) If we start at START and finish at FINISH, hopping between the “checkers” (i.e. the letter Os), we get a king:

… who was certainly a(n) historic monarch, and our answer.

What is your favorite bit of trivia about Richard III? I like that he is most remembered for being a Shakespeare villain who said “My kingdom for a horse!” and then in 2012 his remains were discovered in a carpark.

Who is your favorite King Richard? Public opinion about Richard I isn’t great, even considering he was called “The Lionhearted” (which is indeed kind of cool), because he was only in residence as king for a few months, and otherwise wandering around crusading. Richard II was, like, the Robert Baratheon of the fourteenth-century England and died in prison after being deposed, setting in motion the rivalries that led to the Wars of the Roses. To this day I am not sure if my understanding of fifteenth-century English history is from Shakespeare’s history plays or a seminar I took in college or Starz’s The White Queen starring Max Irons (the hawt son of Jeremy Irons and Sinéad Cusack) as Edward IV or 1066 and All That. I have a better handle on the sixteenth century; right now I’m reading The Mirror and the Light, which is the third book in Hilary Mantel’s trilogy about Thomas Cromwell. Gee, I wonder how it’s gonna end — lemme guess: a wily political operative like him must’ve lived to a ripe old age in quiet country retirement after serving his monarch with honor and wisdom for many, many years. No spoilers, please!