Theme: Famous men whose last names are (parts of) names of cocktails. This is hinted at with 35a COCKTAIL PARTIES [Evening socials, or a punny description of 17-, 23-, 50- and 57-Across], implying that these men are “party” to “cocktail” creation. Is it also implying that the thematically pertinent part of the names of these men (who presumably have the first half of the first word) appears at the “tail” end of the theme entry? Maybe not, but my mind is in the gutter, and that’s usually where it stays. 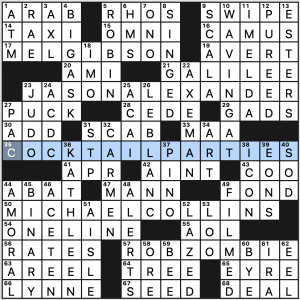 I was going to complain that I didn’t think a brandy Alexander was ever called just an “Alexander,” but Wikipedia tells me otherwise. Same with a Tom Collins. So the theme seems solidly consistent in that regard.

However, I don’t really see the need for all the theme entries to be men. The title could be changed to simply “Bartenders” and maybe then you could include Debbie or Althea Gibson or Joan or Judy Collins. It would all depend on symmetry. Maybe what we have in the grid is the best set possible. I don’t know. Or is it really that cocktail thing I alluded to earlier?

But as if to try to balance things out, the grid gives us KATHLEEN Turner, IMELDA Marcos, the operatic CARMEN, fictional Jane EYRE, LYNNE Cheney, Issa RAE, Yoko ONO, and Aimee MANN.  But then these are further countered by AXL Rose, CAMUS, Matt LE BLANC, actor Danny PINO (don’t know him), IRA Gershwin, and a generic AXEMAN. So yeah. A lot of names with most of those falling on the testosterone side.

I liked BIG ASK [Difficult demand to fulfill] and GALILEE elsewhere in the fill. I could do without entries like AREEL [Staggering] because where have you ever heard or read that word except in crosswords.

The theme is fine, it just didn’t do a whole lot for me. Perhaps if it was a bit more balanced. 3.4 stars. 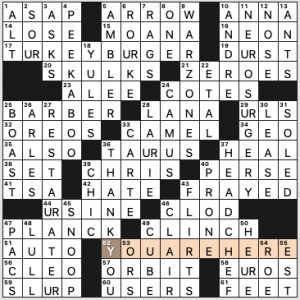 Look! It’s a rebus puzzle on a Wednesday. The theme revealer’s YOU ARE HERE, and there are {UR} rebuses within the other three long answers, plus in the Paul Lynde spot.

Now, what’s the first thing the solver encounters in a crossword? It’s usually the clue for 1-Across. Imagine my surprise when ASAP was clued [“Chop-chop!”]. People! It was just a week ago, wasn’t it, when CHOP(-chop) was in the HALF OFF theme, and we talked about the racist/classist tinge to the term? So why the hell would the editor have it in this puzzle? You gotta f&$%ing learn from your mistakes, grow and evolve. You repeat a problematic term, and it leaves your audience to suspect that you don’t give a hoot if it offends anyone.

Four stars from me, and a firm debit in the editorial zone. 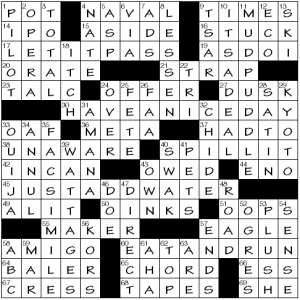 What I like about this theme is that all the phrases are very common and quite natural-sounding. Nothing forced or weak about them. The constructor happened to notice—collecting them over time, perhaps?—that their initial letters spell out body parts.

Just as I ended Monday’s write-up with something a bit raucous, here’s another. It goes with HAVE A NICE DAY and OOPS. (30a, 51a)

Hope I haven’t ruined your day. 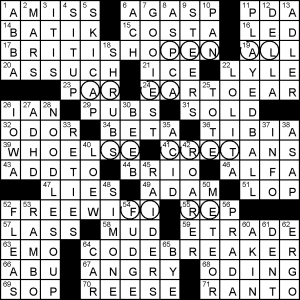 Although “words that follow” themes are pretty standard in the LA Times, this one lends a bit of variety to the genre by hiding the entries between two words. The revealing answer is CODEBREAKER, and, as indicated by the circles I have added, four “___ CODE” words are hidden in the puzzle. The weakest of the four is SECRET, which is the same kind of code as CODEBREAKER. A common problem with this theme variant is more utilitarian long theme answers, but here we get EARTOEAR and FREEWIFI (as a real-world phenomenon, I don’t fully understand it though.)

The grid design was, in the main, cleverly balanced allowing an extra pair of long answers: PLAYEDBALL and NOODLESOUP. The big trade off in this arrangement was roll-your-own, ROARER, which was basically locked in by having R??R?R formed by three theme entries. 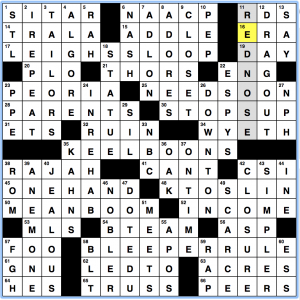 I spent a BUNCH of my solve time on this week’s AVCX trying to figure out what I was missing.  AS usual when that happens, writing it out cracked the nut:

This one’s a little tricky to explain.  Each of these answers has an “EEE” sound, and an “OOH” sound, but swapped around.  If you swap them back, you get a more sensible phrase: