I took a break from solving this week’s Fireball to do this puzzle…and gave myself a case of whiplash. The themes seem like mirror images of each other.

This one takes normal words whose first two letters are chemical symbols and whose remaining letters spell a different word. Cluing wackiness ensues.

All is revealed by the central entry CHEMICAL BONDING [Attraction suggested by this puzzle’s theme answers]. 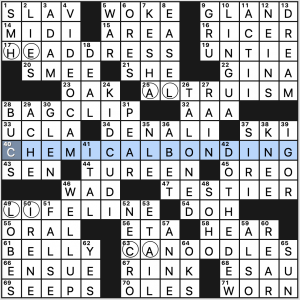 This works, and I found the theme to be enjoyable. LIFELINE especially seemed to be a good find. However, I will point out that CHEMICAL BONDING occurs between two structures (atoms, ions, or molecules), so I would expect to see two chemical elements being bonded in each theme answer. But instead we have a chemical element bonding with…a regular word. I’m not going to fixate on that because I enjoyed the puzzle just fine, but it did give me pause.

My solve time is about twice last weeks, mostly because of more difficult cluing, but also because those clues skewed younger (and I’m a week older than I was last week ?). I liked the fresh-feeling clues, but they definitely were a challenge.

Plus, I didn’t know KID CUDI [“Day ‘n’ Nite” rapper] and that crossing with OAK was killer. (I’ll get to that below.) VIDEOCAM [Movie maker] was tough to suss out because I wanted VIDEOGRAPHER in there. (I don’t think a camera actually “makes” the movie.) DO THE DEW was another bright spot but tough to parse with the ambiguous clue [Slogan for a green-bottled brand].

Nothing much to grumble at. Another entry I didn’t know: NECRO [Post to revive a dormant forum thread]. I enjoyed learning that one.

Phew! That’s a lot of outstanding cluing! Add that to the solid theme (and the fun title I failed to mention) and we get a four-star rating.

Another Fireball constructed by a man. Must be Thursday.

I figured out the theme early on and enjoyed it thoroughly. The “Head” of the title is the beginning of each theme answer, and the “Table” is the Periodic Table of the Elements. Each theme clue starts with the symbol for an element and the answers…oh, heck, it’s easier to show than to explain.

This was a fun theme – original and well-executed.

What I didn’t know before I did this puzzle: that Muhammad Ali starred on Broadway in a musical called “Buck White.”

I leave you with the music of my youth.

Happy Thursday, all!  We’ve almost made it to the weekend and Friday is in sight.

This was…not my favorite Thursday NYT.  I feel like I’ve seen spoonerisms done before, and better, in this space, and which the fact that these spoonerize the same letters in each theme answer, the overall theme is just…fine: 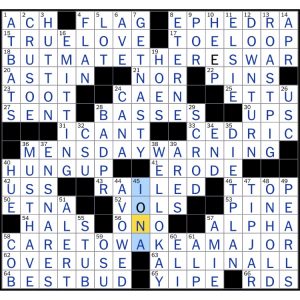 So, once again, spoonerisms of the Ms and Ws in the phrases BUT WAIT THERE’S MORE, WEDNESDAY MORNING, and CARE TO MAKE A WAGER.  This felt underwhelming for a Thursday puzzle.

Yoko ONO‘s music often gets unfairly reduced in pop culture, but there’s some really interesting stuff like “Walking on Thin Ice”.
Be well, all!

I’m only now just noticing the title. I love it! It’s an example of a puzzle that doesn’t need a title per se, but it definitely doesn’t hurt!

THEME: Hair styles in “down” positions are embedded with in longer phrases 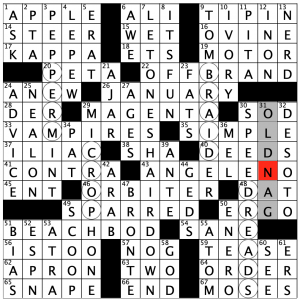 I liked all the long, down theme answers- especially TOMB RAIDER since we often see Lara Croft make appearances in the grid and TOMB RAIDER is usually in the clues. As soon as I got PEPPERMINT (no crosses necessary!) and saw the letters circled PERM, I knew exactly what the theme and the revealer would be.

This is a perfect puzzle for novice solvers IF Universal could find a way to circle the necessary letters in its regular publications. Yes, David is kind enough to do it for people who access the puzzles through our site here, but what novice would do that? I’ve seen several novice solvers try to interpret the Universal clues when they’re asked to count letters. They get frustrated and give up quickly.

Anyway, everything about the puzzle is perfectly fine. Laughably, I had SARAN for [Kitchen wrap?], which totally works, and it set in motion LESS instead of BIAS  for [Partiality], which kinda works. So I had a hot mess down there for a bit.

My only nits are IT’S FUN! doesn’t really strike me as a thing people say and having a ONE’S pronoun is always awkward, especially in the revealer. Other than that, good times!

I feel I’ve seen the revealer a few times before, but usually we get colours. Today, MIXEDGREENS is five servings of salad – anagrammed and floating somewhere in the answers. CHIPSANDDIP (spelt without an ‘S’ here) with SPINACH? Not sure that’s a necessary addition! After that, in order, we have LETTUCE, KALE, ARUGULA, and spinach’s lower class chum, CHARD. I hadn’t come across the term “mesclun” before, but apparently it’s a French salad that can in fact include the anagrammed greens. That extra layer makes it more flavourful for me. At the time though, I was trying to figure out if it meant “mescaline”.

My mistake was at ?SN/?EADERS. [Web banners] didn’t help me a lot, so LEADERS seemed plausible. I get now that HSN is Home Shopping Network.