Title: “That Which Cannot Be Said”
Prompt: The meta for this puzzle is a singer whose name is 14 letters long.
Answer: John (Cougar) Mellencamp 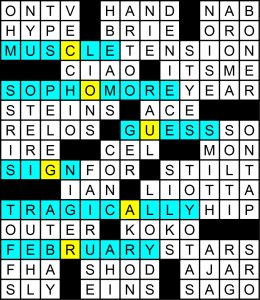 Played easy for me, but with only 230 correct answers on the board with 30 minutes before deadline it clearly played tougher with most other solvers.

13×15 grid, and we had four grid-spanning entries that were presumably theme, but then also two shorter ones that turned out to be theme as well:

15-A: [Headache cause, possibly] = MUSCLE TENSION

41-A: [Longtime popular Canadian rock band, with “the”] = TRAGICALLY HIP

Scanned the grid for anything wacky, but didn’t see anything, so checked out the title again. Lo and behold, my first thought turned out to be the key: silent letters. Take the one silent letter in each entry, highlighted in the grid at right, and see what happens:

So the “silence” of COUGAR here is that you don’t say it anymore since he records as “John Mellencamp” now. I had no problem with this because I’m 47 and so grew up with his music, but it’s a bit oblique of you’re not familiar with this nuance, which may partially explain the low number of correct entries.

Also from Indiana: DENIECE Williams at 8-D. From next door in Ohio: [Home city for Devo and the Black Keys] = AKRON at 44-D.

Tricky clue: [African river with two countries named after it]. Five letters, so gotta be CONGO, right? Except that it’s NIGER.