On April 12, Ross Trudeau announced that for the remainder of 2020 he will not submit any solo puzzles to the New York Times. In his words:

Any grids they receive from me will be collaborative efforts with folks from groups that have been historically underrepresented in that puzzle.

Getting published in the most popular puzzle in the world is a zero sum game. And as someone who’s benefited from a variety of systemic and structural legs up, it feels like it’s past time to pay it forward.

He is also using his website and distribution list to showcase the work of constructors from under-represented groups. I’ve always loved Ross’s puzzles, and I’m delighted to know that he’s a mensch as well as a skilled constructor. Check out his blog and get on his Email list if you want more good puzzles every week. I’m sure today’s NYT was in the pipeline before he made that announcement. It’s a cute theme that struck me as a little edgy for the Gray Lady, although it’s tame by BEQ or AVCX standards.

Four rows of the grid have circles in each entry. 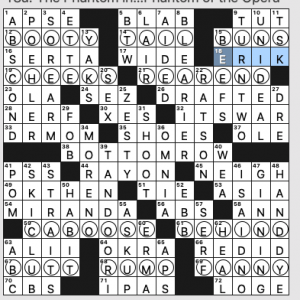 And the revealer: 38a [Last line of a spreadsheet (as suggested by the circled squares?)] is the BOTTOM ROW. It’s a solid, well-executed, and Monday-accessible theme that’s also fun to solve. Nice. My only real quibble in the fill is UNIDEAL (un-ideal). Not bad for a grid with a lot of theme constraints.

What I didn’t know before I did this puzzle: that the Phantom of the Opera’s name is ERIK.

This looks like a debut, so congratulations are in order. Huzzah!

59a is clued [Uses a wok, or, read as a direction, a hint to the ends of 17-, 28- and 44-Across] and is answered with STIR-FRIES. Each theme answer ends with the letters of FRIES stirred up (i.e. scrambled). 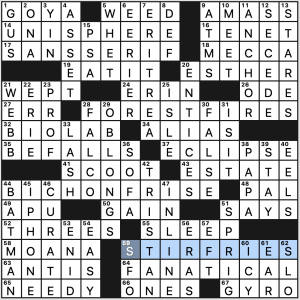 Tidy little theme. Of course, I had trouble parsing that last one with only a few letters here and there, and I was beginning to wonder if I would recognize the dog breed. But it all fell into place once I realized what it was.

I did find another instance of this same theme in the cruciverb database—a Jeff Chen/NYT grid from 2013. The themers are identical except Jeff also incorporated MORTGAGE REFIS. He managed to do so beautifully with great fill, but that’s a tall order when you have five entries and the central one is 13 letters long. And let’s be honest, REFIS is a weird-looking and unfortunate plural.

So this puzzle does fine with just four. I’m not bothered by the duplication since constructors tend to think alike, and if you hit upon the idea of anagramming FRIES by way of STIR FRIES, you’re probably going to end up with exactly one set of viable theme answers.

In the fill, we get additional nine-letter entries in the Across direction, and they’re both great (UNISPHERE and FANATICAL). Elsewhere, goodies include ERITREA (which I think appeared last week), ECLIPSE, TRISTAN, and BATMAN. OBLONGS is weird as a noun [Rectangular shapes], and crosswordesey EFT makes an appearance, but those are the only iffy bits in the fill. The rest is quite nice.

Smooth and clean grid to start the week. 3.5 stars. 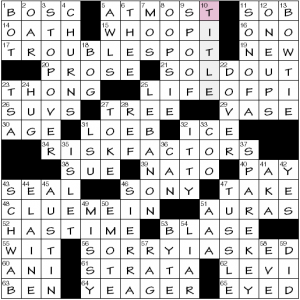 Simple concept for this theme: phrases beginning with the names of classic board games. I imagine with the lockdown there’s been some sort of uptick in pastimes of all sorts, including old-fashioned board games.

Let’s take a spin around the grid and see if there are any highlights.

Found out about this on a board game message board:

It was either that or “Sorry Somehow” by Hüsker Dü.

Short review today because I’m running behind on life and time is meaningless! I can’t say this is my favorite New Yorker puzzle that I’ve solved lately. Opening with BRIT HUME, a man involved in a right-wing propaganda machine claiming to be a journalist, put a bad taste in my mouth from the get-go. The crossing of THEODOR ADORNO and SINESTRO also made me cringe a little (for different reasons– ADORNO actively opposed fascism, for one thing), but the possibility that his last name could have been ADORNA and that Green Lantern’s arch-nemesis could have been a female villain named SINESTRA makes this crossing a tad unfair. 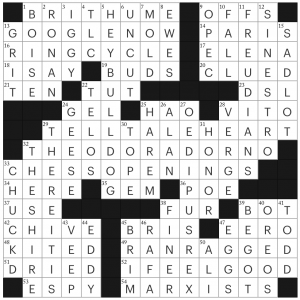 Possible Natick at THEODOR ADORNO/SINESTRO aside, I do like the central staircase quite a bit (TELL TALE HEART / CHESS OPENINGS), and the ADORNO mini-theme is interesting (FREUDIANS / MARXISTS). The fill is good, the cluing appropriately tough for a Monday New Yorker, and I am glad to have been reminded of the Looney Tunes “What’s Opera, Doc?”.

Overall, I enjoyed most of this puzzle, but the couple of rough spots brought it down a bit for me. Still several stars for a clean grid with an interesting designs and some solid trivia/ word play cluing! 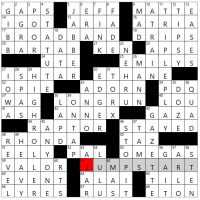 11D: TRIPLE PLAY [Diamond defensive rarity]
17A: BROADBAND [Internet connection touted in the ’90s as faster than dial-up]
29D: HIGH ROLLER [Vegas spender]
38A: LONG RUN [Extended engagement]
61A: JUMP START [Battery boost … and what the first part of the answers to starred clues can literally be]

Triple jump, broad jump, high jump, and long jump. All the theme entries start with a type of jump. Point in favor of this puzzle: it looks like all the major types of athletic jumps are here (though some Googling implies that broad jump and long jump might actually be the same thing?), so it is a complete set of theme entries, which I love.

Point against this puzzle: it was written in the late ’90s, since either the BROADBAND or RAPTORS clues are the most recent references in the puzzle. And I guess I wouldn’t mind a 20+ year old puzzle running now if the clues were updated to reference modern things, but that didn’t even happen here, so it feels like an archive reprint, which takes much joy away from the solve. Particularly, entires like ISHTAR, OPIE, RHONDA, TAZ, and JEFF Foxworthy make it feel like a puzzle from a different era.

At least I learned TORX [Six-pointed star-shaped screw head] and STEN [British weapon acronym]; the latter is an acronym of the names of the weapon’s designers.