I like a theme that takes accepted phrases and reimagines them as something else. In this case, the phrases all become terse negative reviews of a theater performance. The revealer at 40a is THE REVIEWS ARE IN and is clued [“Critics have spoken,” as featured in 17-, 25-, 51- and 64-Across]. 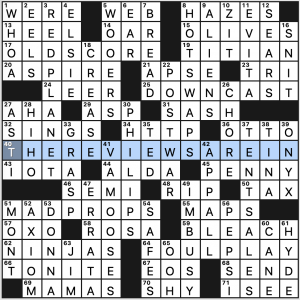 The long fill is outstanding as well, with RED PLANET, HOT SWAPS, TENT SALES, and VAMOOSES. I also liked “I’M BUSY,” TITIAN, NINJAS, and PHILIPS [Maker of Hue lights]. We’ve got a few of those in the house, and for the most part they work quite nicely.

The rest of the fill is smooth, too, so there’s nothing for me to grouse at. Let’s move on to the clues. 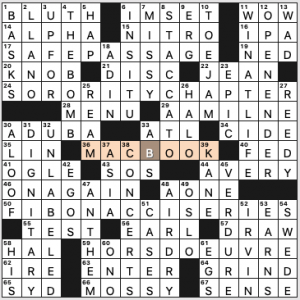 Rather subtle theme, no? The theme entries end with a writer’s output, ranging from the fewest words to the most:

The long fill feels a bit hit-or-miss. I like WIN AT LIFE, THE BOMB, TOE JAM, A.A. MILNE, and STACCATO. Not sure I’ve seen OPEN-ENDER in that noun form before, VERDURE is rather uncommon, and ON AGAIN feels iffy. There are also some shorter entries I’m really not keen on: –CIDE, plural Latin abbreviation E.G.S (!).

3.5 stars from me. That EGS really dinged the puzzle for a lot. (This was the first time that entry has appeared in an NYT puzzle since 1993, which tells you something.) 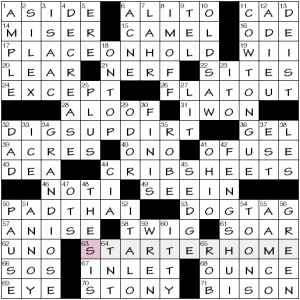 Quickie write-up, since it’s already late in the day.

63a functions as the revealer: [Major purchase for some newlyweds, and a hint to the starred answers] STARTER HOME. Accordingly, those themed answers begin with synonyms, mostly slangy, for ‘home’.

And that’s all I’ve got. 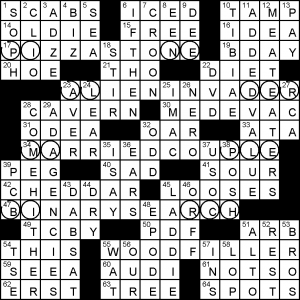 I am DIY illiterate. WOODFILLER means nothing to me. I am the half of the household that rarely gets consulted on “projects”. Luckily, I do no a bit about programming, because we got not one, but two longish programming jargon terms: thematic BINARYSEARCH and IFTHEN going down. The theme features four circled woods, each with unrelated “filler” middles – PINE, ALDER, MAPLE & BIRCH. I appreciate the choice of longer trees rather than say OAK or YEW.

Other notables include two pairs of long downs: ADDEDVALUE/MEATEATERS and COMEHITHER/ADAGENCIES. Both juxtapositions create rather strange images in my head. 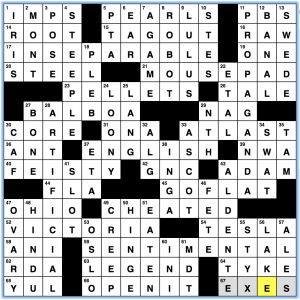 This was a pretty breezy AVCX solve for me, time-wise, and the theme found an interesting nugget of linguistic trivia: 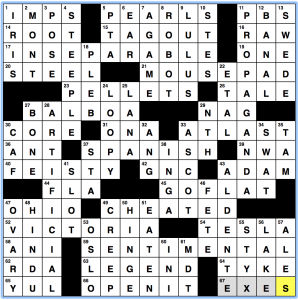 Yes, INSEPARABLE, SENTIMENTAL, PROPAGANDA, and ARTIFICIAL are spelled the same way in both ENGLISH and SPANISH.  The grid even does one of those nifty things where the down clues that cross 37A can support either set of letters needed for the answer:

With ENGLISH/SPANISH on the brain, Slate’s Hit Parade podcast had a fantastic episode on Latin crossover onto the pop charts a few months ago, dipping as far back as “Oye Como Va” and “Eres Tu”, ET AL, focusing on the explosion of Ricky Martin and Enrique Iglesias in the late 90s, and finishing with the current presence of artists like Bad Bunny and Rosalia in the current pop moment. It’s a fantastic listen and worth an hour or so of your time.