Theme: Phrases with a metal—normally as the first word—have that metal “sink” to the bottom, presumably because it’s “heavy,” and the entries are in the vertical direction. 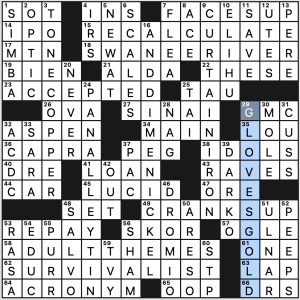 Cute theme, not so much in the wordplay department, but it did keep me guessing, especially when I was trying to parse those third and fourth entries. Oy!

I’m not a baseball watcher, so I didn’t know the Gold Glove Award. I’m not a boxing watcher either, but I do know the phrase “Golden Gloves,” so this entry puzzled me more than I was expecting.

Fill-wise, I’m liking CRANKS UP, SWANEE RIVER, SURVIVALIST, and ADULT THEMES. This last one sure looked like ADULT SCENES since I had SCAM for SHAM [Charade] and DRONIO for DROMIO (hey, why not?). I needed that TV-Y entry [Rating for “DuckTales”] to set me straight.

Another trouble spot might be that TAU/TAI crossing ([Terpsichore’s start]/[Red snapper, on a sushi menu]). Throw in the TAU/ELIHU crossing at the U, and you might be in trouble if you didn’t know who [Benefactor Yale] was.

Peter Gordon is a man. The streak continues.

In addition to the paucity of women in the Fireball lineup, there’s a character from “Dilbert” at 1a. Why is that a problem? Because Scott Adams is a nasty misogynist (he might call himself a “Men’s Rights Activist,” which is the same thing). Don’t believe me? Just ask him:

The reality is that women are treated differently by society for exactly the same reason that children and the mentally handicapped are treated differently. It’s just easier this way for everyone. You don’t argue with a four-year old about why he shouldn’t eat candy for dinner. You don’t punch a mentally handicapped guy even if he punches you first. And you don’t argue when a women tells you she’s only making 80 cents to your dollar. It’s the path of least resistance. You save your energy for more important battles.

Yes, that was 2011; trust me, he hasn’t changed. I won’t link to anything he said about the 2016 election because I value my mental health and don’t want to give any of it more traffic than it’s already had. As we’ve said before, 1a and 1d set the tone for the entire puzzle and Adam’s racist caricature of an intern is not the tone I want in my puzzles. Or anywhere else.

This puzzle and I did not get off to a good start. My experience improved as I worked my way through the grid. It would have been hard for it to get worse. 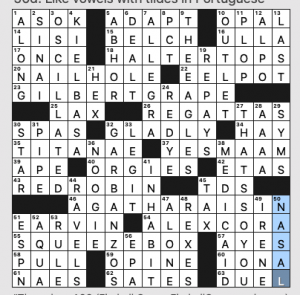 MEDICAID is clued as [Debate topic concerning healthcare]. We would also have accepted [Life-saving safety net often placed on the chopping block by politicians who think poor people should die]. Hey, the Fireball is know for Very Long Clues.

What I didn’t know before I did this puzzle: that Verna LISI was in “How to Murder Your Wife” and that EELPOTs have funnel-shaped openings.

Happy Thursday, all!  We’re here, and that counts for something.

My initial reaction on solving this Thursday’s NYT was “that was it?”, which is not the best first reaction to have.  On further reflection, there’s more going on under the surface than I first thought, but it’s still a little underwhelming: 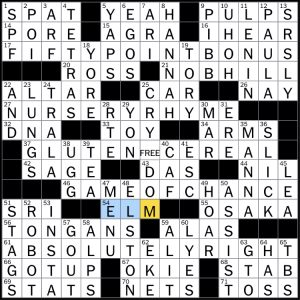 It’s all about BINGO, complete with a FREE space in the center of the grid allowing GLUTEN FREE CEREAL going across (“Breakfast aisle option for a wheat allergy”) and CRY FREEDOM (1987 drama set in apartheid-era South Africa) going down.  It’s a nice idea, but the execution on the theme feels underwhelming.  BINGO as a scrabble booster is great, as is B-I-N-G-O the nursery rhyme and BINGO as a way of saying “spot on!” or “ABSOLUTELY RIGHT”.  But then throwing in that BINGO is a game of chance is one of those things that’s not like the others.  Not quite, anyways.

Is it just me, or do golf and crosswords have a very strong relationship? 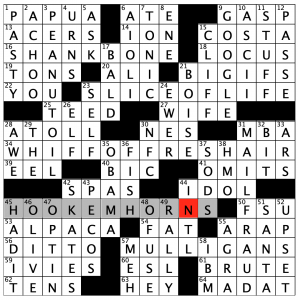 THEME: Golf “oopsies” are found at the beginning of common phrases.

Solid, simple concept to today’s offering. I was unfamiliar with SHANK BONE (that goes in my “glad I know that now” part of the brain). I found the wording to the clue for SLICE OF LIFE somewhat odd: [*Realistically representing everyday events]. It doesn’t feel like the clue is asking for a noun phrase. I would think SLICE OF LIFE would be clued as a “Realistic representation of everyday events,” but I could also be reading it incorrectly and either underthinking it or overthinking it.

Everything else was par for the course! Pun intended.

Enjoy this… Thursday (Had to think about it. Losing track of the weekdays quite a bit!). 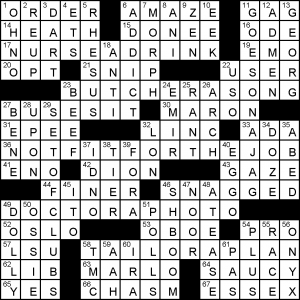 The theme’s revealer is doing an awful lot of lifting: NOTFITFORTHEJOB. I’d say the idea is that, if you divide answers in two, the first part is an occupation, and the second is a thing not usually connected with said occupation; however, in each case, the occupation is used as a verb, and in that usage creates a valid association with the thing? Convoluted? But an ambitious theme nonetheless! So – NURSE/ADRINK, BUTCHER/ASONG, DOCTOR/APHOTO, and TAILOR/APLAN. 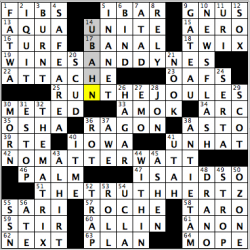 Good day, everyone! Here is hoping you all are continuing to stay safe!

Also hope that you’re believing in the science that’s out there, and some science you surely had to believe when solving today’s grid. Common phrases and/or proper nouns are “measured” and turned into puns as one of the words is replaced by a homophone that also happens to be a unit of measure.

Usually only see one of the three four-letter states in a grid at a given time, but two sneak in here with both IOWA (40A: [Its motto is, “Our liberties we prize and our rights we will maintain]) and UTAH making it (41D: [State with the lowest income inequality]). Sorry, Ohio! The “wire fu” term in the clue to THE MATRIX is completely new to me in terms of those types of scenes, where the kung fu action scenes are aided by wires strapped to the actors and/or stunt people, having a name for it (32D: [1999 sci-fi movie that used wire fu]). Is there any person who was more of a fan of HAGAR instead of David Lee Roth during their times as the lead singer to Van Halen (26D: [Van ___ (sobriquet for a hard rock band when Sammy was their lead singer])? Instead of thinking of the Civil War, seeing ANTIETAM made me think of the times I had to travel to Hagerstown, Maryland to broadcast Minor League Baseball games that included the Hagerstown Suns, and the baseball stadium was near to Antietam Creek (38D: [Civil War battle that led to the Emancipation Proclamation]). Traveling through the American South was very interesting during those times as a baseball radio announcer, but, for our next segment, we are going to go much further south, to the Land Down Under.

“Sports will make you smarter” moment of the day: ROCHE (57A: [Maker of Tamiflu and Valium]) – Australia produced a number of tennis greats in the 1960s, with one of them being Tony Roche, the left-handed doubles maven who won one Grand Slam singles title (1966 French Open) while teaming up with countryman John Newcombe to win 13 Grand Slam doubles titles. Roche also went on to become one of the great tennis coaches ever, leading players such as Roger Federer and Patrick Rafter to Grand Slam titles while also coaching Ivan Lendl and Lleyton Hewitt.

Thank you so much for your time, friends! Have a great rest of your Thursday, and hope you have a good weekend coming up! Stay safe! Keep six feet apart from fellow citizens! Wash your hands! Stay positive, if you are able to!