There is one thing that I am before I identify myself as a crossword puzzle blogger, a journalist, a son of a Muslim father, a native New Yorker, a sports trivia champion and other descriptors, both good and not-so-good.

A black man in America.

I know I am speaking accurately for many black and brown and/or LGBTQ+ people when I say that I am tired, angry, frustrated, and sickened at how the power structures in this country have either ignored our pleas and/or treated us as nothings while appropriating our culture to further this country’s perception of its greatness. This is not just stemming from the George Floyd incident, nor just from Breonna Taylor, Ahmaud Arbery nor Christian Cooper.

All of this incidents, all coming to light in the month of May, highlight the existence of being black in America, and, if one still doesn’t get it or is too tone deaf to truly understand the scars, let me personalize that for you.

In the fall of 2001, I had members of a city’s police force point a gun at me after I had attended a house party. I laid on the ground, with the only thought in my head being that I might very well die  for something I KNOW I didn’t do.  In 2002, I was stopped by members of a city’s police force, on a college campus, and was told, verbatim, that I “fit a description.” On my birthday in 2018, I had a good friend, a white lady who, for the time I knew her, wouldn’t hurt a fly, tell her bosses at a restaurant to escort me out of the establishment because, in the words of the manager, she “didn’t feel safe with you in the bar.” Mind you, she and I had not even said more than two words to each other from the time I walked in that night and, for our whole friendship until then, I was a mentor to her as she wanted to pivot into a sports reporting career. But I’m supposed to be the compliant, non-militant black person, who always has to take the “high road” because any other action at those moments would have led me to be a) perceived as an angry black person, or b) dead.

I’ve fucking had it.

If you thought that coming onto this blog was going to be an escape from the everyday reality flooding cable news or your smartphones for a few minutes, think again. Your 5-10 minutes of discomfort on here is nothing to the nigh 40 years of knowing that one false step that I’ve taken in a life that enough of my friends would call exemplary will lead me to being crushed by the corrupt institutions (e.g. justice, media, etc.) of this country that I do love. Also, I’m fucking tired of the well-intended people who boil down their messages to peace to a sentiment of “let’s just learn to love one another.”  I’ve tried that for 40 years, and I still was almost arrested or killed just for the fact that I’m black and that fact only.

All this is to say that, before you have an intelligent conversation and can be a positive contributor to changing the miasmic status quo has has hovered over America since the country came to be, you had better understand the generational impacts of institutionalized racism in the justice system and police force, the deadly effects of redlining, rife voter suppression, the heinous and long-lasting impacts of the Southern Strategy and the lack of diversity in media.

The days of hearing people bastardize the words and messages of Dr. Martin Luther King Jr., boiling it down to just a few lines from his “I Have a Dream” speech, and letting it slide are over. The days of tolerating arguments loaded with false equivalence, hearing people complain about looting as if black people dying at the hands of law enforcement going back decades and the reverberations from protests in speaking out against them are two separate stacks of dominoes falling at the same time, are over. The days of not flipping out when hearing the “If you don’t like America, then why don’t you just leave” statement, knowing that I’m as much of American as any other, are over. Are you uncomfortable? If so, well, too bad.

I’m black. And I’m pissed the fuck off. 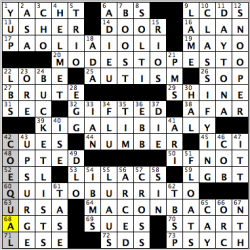 Before I segue into puzzle matters, I do want to apologize for one thing and to one person, Liz Gorski, for taking away from her creativeness of today’s puzzle with my words to start this blog.

Today’s grid is geography rhyme time, with names of types of food being paired with rhyming locations on the world map to create some tasty puns.

Not too much energy left for talk on here, but, given that June 1 is the start of Pride, let’s also remember the struggle so many of LGBT people have gone through and continue to fight around the world to fully lift from the stigmas and debasing our institutions have placed upon them for centuries (59A: [Pride parade initials]). In 2018, I participated in the Pride Parade here in New York and walked with members of the sports reporting website Outsports. Holding their banner while walking past the Stonewall Inn was, undoubtedly, one of the most emotional experiences I’ve ever had. It’s one thing to tell someone to walk in someone else’s shoes. It’s something totally different when that actually is replicated, and even though I had seen and heard many stories about Stonewall, to walk by the establishment surrounded by thousands of LGBTQIA+ allies was a near out-of-body experience. A day I will never forget. 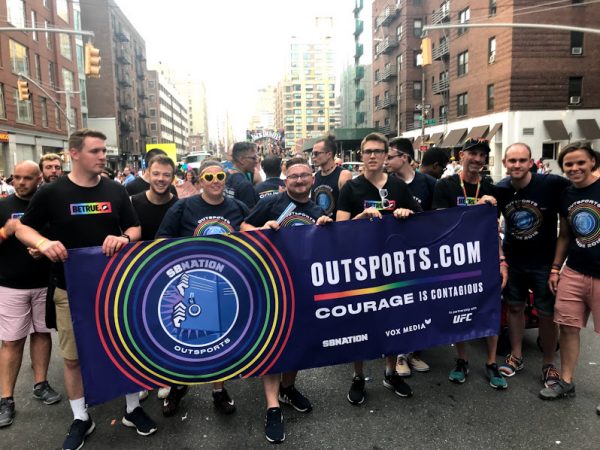 Journalists, athletes and coaches holding the Outsports.com banner during the NYC Pride Parade in 2018. Katie Sowers, who became the first female and first openly gay person to coach in a Super Bowl as part of the San Francisco 49ers coaching staff this past February, is at the far right. 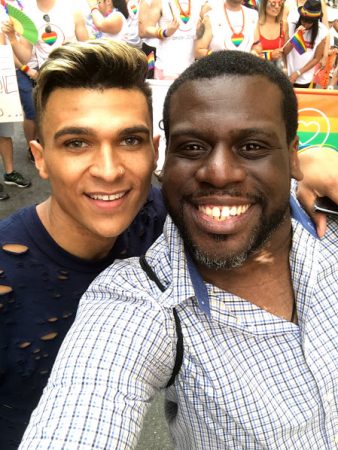 Former University of Nebraska-Lincoln track athlete Jayce Anderson and I marching during the 2018 NYC Pride Parade.

“Sports will make you smarter” moment of the day: MODESTO PESTO (20A: [Pasta sauce from California?]) – Didn’t believe me that the Modesto Nuts, affiliate of the Seattle Mariners, have nuts in their logo? Well, here you go. The team also has a third mascot, Shelly the Pistachio. Long live the California League, known for thin-air-aided run-scoring fests across the circuit!

Thank you so much for the time, everyone. Be an ally. Know how to be an ally. Tear down the institutions of hate. Speak truth to power. Put power behind what’s right and just. 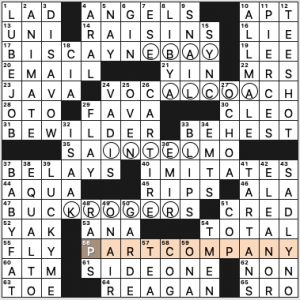 First off, let me express my gratitude to Adesina for sharing his story and his perspectives here. Second, let me say that Black Lives Matter. That is an official position espoused by all of Team Fiend. I hope you share that stance and are working for justice.

Theme revealer: 56a. [Go their separate ways … or a description of 17-, 24-, 35- or 47-Across?], PART COMPANY. The themers contain a corporate name in circled squares, “parted” by the break between two words. There’s eBay in BISCAYNE BAY, Alcoa (crossword constructors’ favorite environment-wrecking company thanks to its vowel-heaviness) in VOCAL COACH, Intel in SAINT ELMO, and grocer Kroger in BUCK ROGERS.

There’s some good stuff among the 7-letter fill (“SADLY, NO,” “LUCKY ME”), but there is so much 7-letter fill for a Tuesday grid. Not all the short crossings are great, but overall, within Tuesday range.

51d. [Ticket issuer], COP? See also: [One who tased Atlanta college students without reason], [One who pepper-sprayed or tear-gassed journalists, or fired rubber bullets at them]. Would have been sage to clue this word as a verb (cop a plea or a feel) or, since it’s  early in the week, a FITB title like the movie Kindergarten ___. A tad jarring as is. 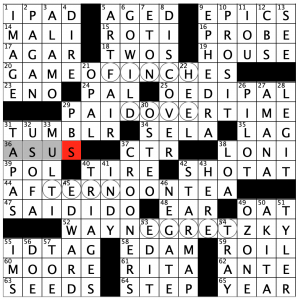 Despite some clever cluing, this one wasn’t my favorite. My biggest gripe is the one I’ve brought up so many times before when it comes to Universal: Only solvers who download the puzzle from this site and solve using Acrosslite have access to the circles. Ironically, that relatively small group of people is least likely to need them. The rest of solvers are asked to count and circle their own letters, which- if the novice solvers I’ve seen struggle with that idea are any indication- is a turn-off.

In general though, I feel like I’ve seen hidden birds quite a bit, and without a snazzy revealer, it was hard for me to get excited about this one. The fill felt stilted (OEDIPAL = barf), though it was oddly fun to stumble on TUMBLR since those last three letters look so wrong in a grid. ASUS looks extremely weird to me. I think ACER when it comes to Tawainese laptops!

Lastly, AFTERNOON TEA is an outlier because TERN doesn’t bridge the two words. I much prefer the hidden word to be part of the whole phrase as it feels more complete. 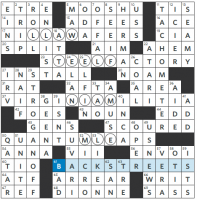 Apologies for the delayed reply on today’s post. It’s hard to focus on much else these days when our Black siblings are being unjustly murdered and oppressed, when police are instigating otherwise peaceful protests, when the President has protestors gassed for a nonsensical photo op with a Bible. All while a global pandemic sweeps our nation and that same President has done nothing but make it all worse.

Each of the theme entries in Frank Virzi’s great puzzle contains a street backwards (hence BACKSTREETS that are “Off the Beaten Path”). Interesting theme entries, fun ways of hiding well-known street names – a solid puzzle. I had a bit of trouble cracking the top central section (ODA / OFFAL / HERMAN / ADFEES were all tough to grok for me), but otherwise the puzzle fell nicely. I appreciated seeing many women in the puzzle, including ANNA Wintour, DIONNE Warwick, Susan and GEENA from “Thelma & Louise,” and Mena SUVARI.

Oh, and Black lives fundamentally matter. It should not be political to assert that the most oppressed and vulnerable in our country have value and do not deserve to be treated the way they are routinely treated. And if you don’t understand the need for the riots we’re seeing, let me remind you how so many of the rights I enjoy as a queer person (read: not being brutalized on the regular) would not be possible without the Stonewall Riots and other riots like it. In this, Pride Month, it is important to remember what our foreparents fought for – and what we’re willing to fight for now that it’s our turn. Happy Pride Month. Black Lives Matter. 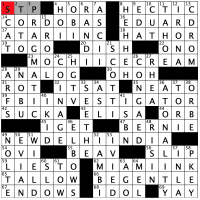 As is usually the case on a Jonesin’ puzzle, I am sure the brainstorm process was fascinating. How many words or phrases can you think of that have a double I in them?

I  can’t think of any more either, other than the word HAWAIIAN, but that doesn’t straddle two words, which is what the theme accomplishes. Well done and clever! A solid 4.6 stars today! ( I have to be brief because I am waaaaay behind!) 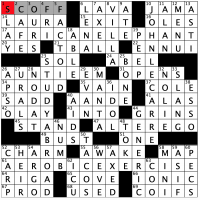 You don’t have to wait all the way until the end for the revealer in this puzzle: it is smack dab in the middle!

I had no idea what was going on, but I think I solved 17A and 47A before I wound my way into the middle and saw what was going on. From there, it was fairly simple. And it should be, because it’s a Tuesday! 4.2 stars today.

That is all! See you on Saturday. Have a safe and healthy week!