The AVCX’s submission window for last Wednesday’s puzzle from Paolo Pasco is closed. Here’s what was going on. 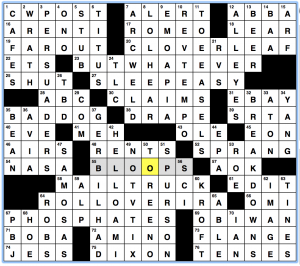 This was a tricky one!  I pieced together what was going on in the grid, but figuring out the “R&B song” referenced by the meta took a little more digging than expected.  Before that, though, let’s talk about what’s happening to the down clues in two areas of the grid:

It took me a second to realize that each clue needed to be broken into two, and for two answers to go in each set of grid squares – “Response to a Twitter joke” is LOL and “audit” is HEAR, for example.  The rest of the pairs split into EMO/APIA (splitting between “Person…” and “Samoa’s capital”), REV/TEMPO (“Gun…” and “speed…”), TOE/EASELS (“On your foot…” and “legged supporters”), GERBIL/HAD (“Common…” and “possessed”), NO TV/TIX(“Punishment…” and “Broadway…”), and TORE/ENO (“Ripped” and “composer of…”).  Looking at the acrosses of the affected entries, we get LOVE and HATE in both the top and bottom of the grid.  Thinking in terms of how the down clues are split, there’s a “Thin Line Between Love and Hate”, and indeed, that’s an R&B song that describes this puzzle, so that’s our meta answer.

It topped the R&B charts, hit #15 on the Hot 100 and was later covered by Annie Lennox, so that’s good enough for me.  I found this puzzle tricky to solve on my initial attempt (especially figuring out how to parse the theme clues), but I like how it needed me to take a step back and think about the grid as a whole for that final meta “AHA”.  Hopefully you enjoyed it too!

Be safe and well.