Not gonna lie. This played tough for a Wednesday. Either I’m just on the wrong wavelength or the cluing seemed more apt for later in the week.

Regardless, our theme is phrases whose first word is a slang term for a job. The second word in each phrase also changes meaning to create crossword wackiness. 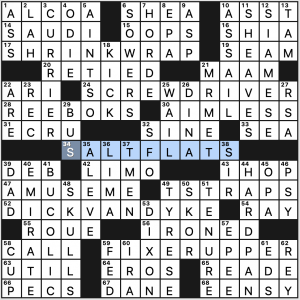 This works, although I will admit to not knowing that a prison guard can be called a screw. (Here is one explanation of the origin of the term.) And it might have been more appropriate to clue “driver” as a golf club rather than as another occupation. But otherwise, a most enjoyable theme.

Loads of 6s and 7s in the grid like CURRIER, SIAMESE, REEBOKS, AIMLESS, BUCOLIC, TENURE, TYRESE, “AMUSE ME,” etc. Nothing extra sparkly though.

I had to give HARD PAN [Drainage hinderer] a very long side-eye, even after I filled in the last letter. To me it seemed like a green painty sort of answer, but apparently it’s actually an earth science term (and it’s actually one word: HARDPAN) referring to “a dense layer of soil, usually found below the uppermost topsoil layer” (thanks Wikipedia!). Well, you learn something new every day. 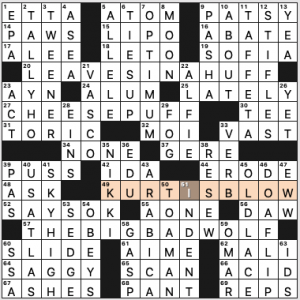 Cute theme. The revealer is THE BIG BAD WOLF, 57a. [Fairy tale villain associated with the ends of 20-, 27- and 49-Across]. He threatened to huff, puff, and blow the Three Little Pigs’ houses down, hence:

While I was solving, it felt like I was encountering a lot of women and people of color in the puzzle: ETTA James, SOFIA Coppola, AYN Rand, IDA Lupino, themer KURTIS BLOW, NIKKI Haley, and OMAR Epps. We also have Jared LETO, Richard GERE, VASCO da Gama, and Michael Caine and Jude Law’s ALFIE character. I don’t feel there are so many names in the grid that we couldn’t have handled PATSY Cline instead of [Easy mark], but the PASHA crossing might have snagged some solvers.

Not wild about quizzing people on a British [Hunting cry], and I’m fairly confident that tween is far more commonly used than TWEENER. The 1970s kid in me enjoyed SKY HIGH because it made me think of the Jigsaw hit song. 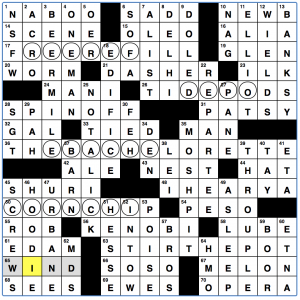 Let’s take a look at what’s going on with the circled squares in today’s grid:

Each set of circled (or in the above breakdown, highlighted) letters is another way of saying “pot” that’s been anagrammed – REEFER, DOPE, CHEEBA, and CHRONIC.  I feel like I’ve absolutely seen something like this theme before (maybe even in the AVCX?), but this was a solid answer set and grid, so I didn’t mind at all.  Remember the Tide Pod Challenge?  Those were the days.  The days where teens joked about eating Tide Pods despite not actually eating Tide Pods so much that Tide hired Rob Gronkowski as a spokesperson for Not Eating Tide Pods on Twitter:

One final note: is a BEER MILE an actual thing?  I never ran track and figured that one out by treating it like a Something Different clue (“fratty” and “tradition” probably means BEER, and a MILE is something that did pop up in gym class/running). 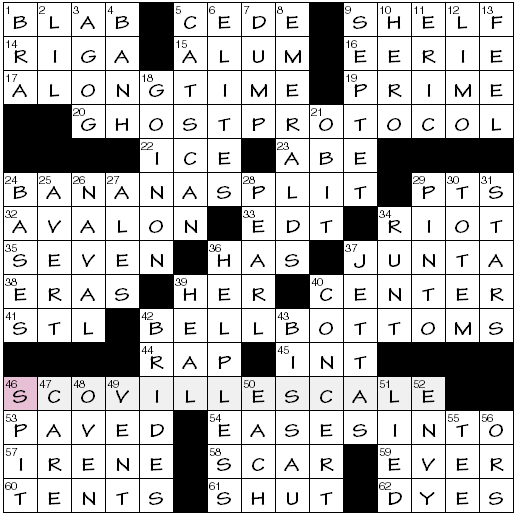 Just three samplings to keep the grid manageable. As one would expect, the three representative peppers appear in descending SHU order, with GHOST peppers ranging frp, 855,000 to 1,463,000 Scoville Heat units, low-tier BANANA peppers at 1,000–2,000, and sweet BELL peppers not tipping the scales at all, with zero SHU.

Here’s one of the few decent charts I found that didn’t have either a cutesy pepper or thermometer shape: 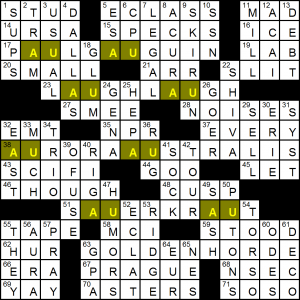 Today’s Wednesday puzzle felt a lot easier than most, both in grid design and in theme type. The repeated AU’s I found easy to pick up on, and they helped guide later answers. All four theme answers: PAULGAUGUIN, LAUGHLAUGH (by one of many forgotten Garage-y / Bubble-gummy late 60’s groups, the Beau Brummels), AURORAAUSTRALIS and SAUERKRAUT; as well as the revealing GOLDENHORDE make for an interesting and varied set of answers. As a revealer, GOLDENHORDE is a little vague – there isn’t anything indicating the double part of the theme, as such; though I guess 10xAU makes a horde?

Not a lot else to highlight. As noted previously, it’s an early week grid, with many smaller corners that fill easily. HEPA is an answer I’m surprised we don’t see more. I guess filters and their (in)effectiveness are a hot topic now?

NOTE: My version didn’t have stars in the clues. At some point, this was corrected. I don’t know what the print versions looked like.