Yes! You are not imagining it! The Fireball was constructed by a woman (confirmed by the constructor herself, not simply based on the name).

And it’s a good one that played a bit harder for me than most FB puzzles. Each theme answer is a scientific measurement clued as a soundalike phrase. 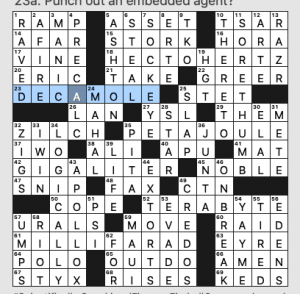 GIGALITER is my favorite because it made me, yes, giggle. They all work, and they’re all funny. Nicely done! Here’s hoping the next run of male constructors in the Fireball lineup is broken more quickly.

What I didn’t know before I did this crossword: that KEDS have a wedding collection. I approve. I also did not know that ERIC sings “Her Voice” in “The Little Mermaid.” I’ve never seen it; not a big fan of romantic stories that require a woman to literally give up her voice to get the guy. That’s not even subtle.

This is the second week in a row that I’ve been underwhelmed by the theme of the Thursday NYT Crossword: 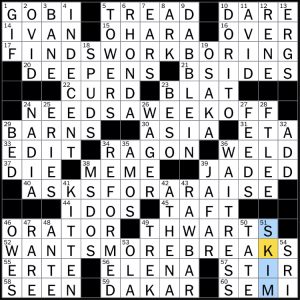 It’s some C+ job-related puns!  This unhappy crossword reviewer DOESN’T HAVE A CLUE why this is a Thursday puzzle.  The theme’s absolute Tuesday material and slight trickier cluing/fill doesn’t really make this feel any more worthy of a later-in-the-week slot.  Maybe I’m JADED, maybe the INDECENT both-sides-ism of the NYT’s op-ed department has me in a particularly harsh mood, but this just didn’t do it for me.

Brand new byline today, so congrats are in order.

We’re given an add-a-word theme in which the letters AT are tacked on to the ends of theme answers. 48d AT LAST is the revealer, clued [Song covered by Celine, Beyoncé and Aretha, and a hint to this puzzle’s theme]. Odd that Etta James, who had the biggest version of the song in 1960 is not included in the clue. 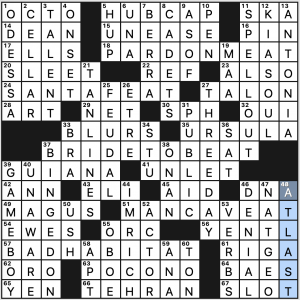 Solid wordplay. The first one feels somewhat forced, but I’m good with the rest of them.

A nice grid with good wordplay and impressive fill. 3.7 stars. 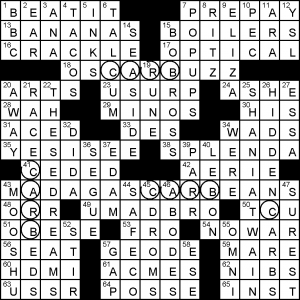 HIDDENCARBS is a great revealing answer, and worthy of a themeless grid. That said, not every puzzle idea has enough thematic meat to be carried full term. I feel like this should have been rejected at some point in the construction process. OSCARBUZZ is a solid nine. Then RACECARBED is a ten pluralised to pair with HIDDENCARBS. That’s already a shaky start. And then…

MADAGASCARBEANS is a 15 that has very little presence on Google and which I have never heard of. It exists in exactly one dictionary on hand, Merriam-Webster, which simply says “1: Hyacinth Bean. 2: Lima Bean.” The clue claims they are “Lima family legumes…” Lima beans are a species of the legume family, so I’m not sure what that first part means. The second part claims “… that yield vanilla.” Vanilla comes from an orchid not a bean. The orchids are found in Madagascar and sometimes their pods are called “vanilla beans”. But the clue seems to be conflating several different things and based on not much in the real world.

Now are there alternatives? Not really. There aren’t many unrelated answers that hide CARB across two words. When you have no viable entries that match up properly, the best course of action is to can the puzzle in its entirety. I’m further mystified this puzzle not only was submitted, but passed by editing and fact-checking without an eyebrow raised.

The grid is actually very well filled, with SHANIATWAIN and THESEDREAMS as a non-thematic long pair flanking the theme answers and UMADBRO, BOBROSS and SPLENDA among the medium-length answers. Outside of the theme, which was a non-starter, this puzzle did provide entertainment.