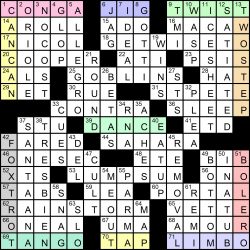 Good day, everyone! Here is hoping that you had a good weekend last week and, at the very least, were able to spend some time digesting the gravity of the protests and demonstrations across the country and the world, and proactive ways you can make any contribution to help us physically make that moral arc of the universe bend towards justice for good! OK, back to crosswords! (Also, thank you all for your patience in letting me vent on here last week.)

Today’s grid is definitely one that will make you DANCE, as each answer on the perimeter of the grid in this square-shaped grid is a word that can also be used as a type of dance (39A: [Square ____ (alternate puzzle title suggested by this grid’s perimeter)]). Question for all of you: Which of these dances mentioned are ones that you can do in your sleep, and which one(s) might make you end up eating a mouthful of pavement if you tried it?

Very fun grid to solve once knowing the theme and, if you knew it pretty quickly, those answers on the perimeter probably fell instantaneously. Even with the high number of theme entries, still was room for some nice fill, from GET WISE TO (18A: [Become informed about]) to ALLEGRO, which once again reminds me to brush up on my Italian when it comes to music tempos (5D: [Briskly, in music]). Seeing the entire SANTA ANA spelled out was a welcome site as well (37D: [Seat of California’s Orange County]). Any crossword will always get extra points for African references, like SAHARA in this grid (44A: [Vast African desert]). There was a time a few years ago when I would describe the issues with my car as GOBLINS being inside, and I don’t know how/why I started to use that terminology (25A: [Mischievous sprites]). Just as soon as I started using that term, I think I ended it because I thought I was sounding way too much of a fogey for my age at the time. As of right now, there are goblins inside my knees after going on a four-mile run not too long before this blog! And by “goblins”, I mean, quite possibly, tendonitis.

“Sports will make you smarter” moment of the day: COOPER (20A: [CNN’s Anderson]) – There are few well-known sports figures with this surname, from former Milwaukee Brewers slugger Cecil to former Los Angeles Lakers forward and defensive dynamo Michael. We’ll spend time on women’s basketball legend Cynthia, the driving force of the Houston Comets as the team won the first four WNBA championships in league history (1997-2000). Even though she had Hall-of-Fame teammates in Sheryl Swoopes and Tina Thompson by her side, Cooper won the WNBA Finals MVP in all four finals, and she also won the league’s first two WNBA regular season MVP awards. “Coop,” who attended the University of Southern California and later coached the Women of Troy (yes, “Women of Troy” is the nickname of USC’s women’s teams, with the men’s teams being “Trojans”), won the league’s scoring title in each of the league’s first three years. 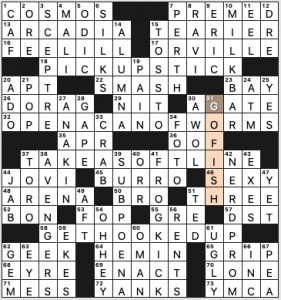 So I guess GO FISH has nothing to do with the card game, and we’re to read the themers as a set of instructions for going fishing. I don’t think it works great.

Some of the fill felt like a bit of a reach for a Tuesday puzzle. ARCADIA, an AGATE marble, ODIC, FOTO?

Generally a dudely vibe in the puzzle: ORVILLE crossing RAVI, ERIC, and DRE; BON / JOVI, ANAKIN, ORR. Fictional Jane EYRE is about it for women.

P.S. Dictionaries can be years behind in reflecting actual usage. We see DO-RAG in crosswords and in Merriam-Webster, but the DURAG spelling predominates among those who wear one.

Matt Jones’s Jonesin’ Crossword, “Reed All About It” – Derek’s write-up 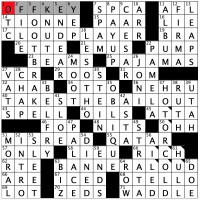 I had a major brain cramp in finishing this puzzle. Look at all those error marks! I didn’t get the theme at first, but the flavortext, which says “at least one famous Reed,” is hinting at the fact that LOU is hidden in several common phrase, often to comedic effect!

Well done. Only three, but still well done. Do you young kids even know who Lou Reed is? If not look him up! I don’t know if it was intentional or not, but having LIEU at 58A is a nice touch, giving you at least homophonically another “LOU” in the grid! Getting close to 1,000! 4.5 stars this week. 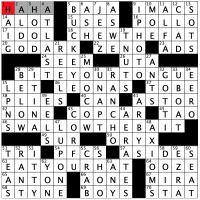 How do I not know who these constructors are? I will admit I don’t know everyone who constructs, but I know a fair amount, and most everyone who is already in the constructor database on this site is a known entity to me. If this is a newer team, welcome to the world of setting, as the British would say! This is a fine Tuesday puzzle, that somehow made me hungry:

Nice and simple. And of course the unifying thread in this theme is none of these things are actually edible. Hopefully! Quick solve for me, but that is ok on an early week puzzle. Nicely done! 4.4 stars for this one.

I will stop here! Everyone have a safe and healthy week!

O say can you see!

THEME: Added O to the end of a word in a common phrase leads to wackiness 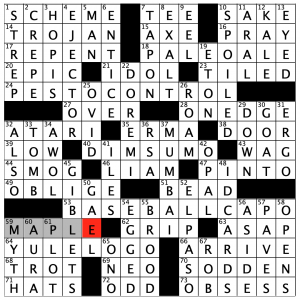 Classic theme type with an added letter- this time specifically placed at the ends of words, hence the title “Owe Back.” I liked most of the theme answers and found them lively, perhaps the exception being DIM SUMO (which is also the only entry where both parts of the phrase completely change meaning from the base phrase).

A bit of inconsistency with which word in the phrase gets the O treatment, but no big deal.

Once again, I’m seeing AXE clued with a [var.] Is this usually the case and I just never noticed? I don’t think of AXE‘s spelling as a variation at all!