This week, we’re looking for a U.S. President. Aren’t we all. 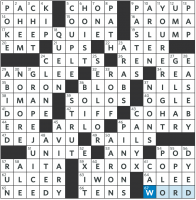 Grid wasn’t too tough, and there was that last across entry that suggested where to start with the meta:

There are indeed one dozen two-word answers in the grid:

… and at this point, we (I recruited Jesse to my campaign) were stuck. We knew it had something to do with an almost-pangram, since the only letter missing from the set was Z. (“It’s kinda pangrammy” read one text.) Could Z lead us to a president? (Turns out, yes.) So we put it aside.

With just hours to go before I had to write this post for you, I asked for a nudge from another friend in our solving group. OH HI, said Jeremy. You found the twelve two-word entries? NO MORE. What’s missing? Just Z, I said. KEEP QUIET, he said; and what are there only twenty-four of? Ohhhhh. Just the first letters of the pairs. YOU’RE RIGHT! The letters missing, if we take only the first letters of the pairs, are Z and T.

Our answer is thus Old Rough and Ready himself, Zachary Taylor, descendant of slaveowners, father-in-law (briefly) to future Confederate President Jefferson Davis, and slaughterer of countless indigenous people during his military career. Taylor’s short administration saw the development of the Compromise of 1850 and the Fugitive Slave Act, which penalized anyone who helped enslaved Black people escape, even in supposedly “free” states. Black lives did not matter to President Zachary Taylor. He died in office, likely of cholera, leaving Vice President Millard Fillmore to serve the rest of his term with yet even more mediocrity.