Someone’s having a rough semester as things wind down this term. Every single grade has been marked down by one whole letter. A lot of schools went Pass/Fail this term, but apparently not this one. 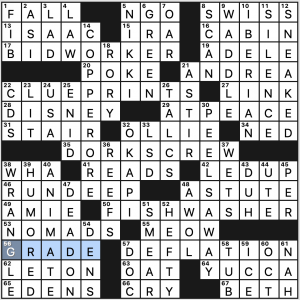 Clever theme. I like the consistency in having the changed letter be the first one in each answer. And I really like the constructor’s solution in dealing with a 14-letter revealer. Having one of those is often a real challenge, but it breaks up nicely here, and the second half is symmetrical with the first theme answer. Not necessarily an ideal solution, but definitely worth considering if you find yourself with an awkward-length revealer.

Quite nice fill with COPPER ORE and PEELS AWAY in the marquee spots. DISNEY, ASTUTE, and YUCCA are nice as well, and hey look, there’s NIKKI Haley at 5d. Those of you who did last week’s Wednesday NYT should know how to spell her name now.

But I’m really admiring those NE and SW corners as expansive as they are and yet with really nice fill: WADDLE, IBERIAN, SILENCE, SNEAKED, AT PEACE, ANDREA Mitchell, RUN DEEP, NOMADS, WRANGLE, HUMORED, and ANIMATE next to DEAD ON. Only AMIE looks like crosswordese in the whole lot. Either one of those corners would be something to be proud of, but the two together are impressive indeed. Nice work.

Really, this was a lovely grid with a well-executed theme, beautiful fill, and solid cluing. Four stars. 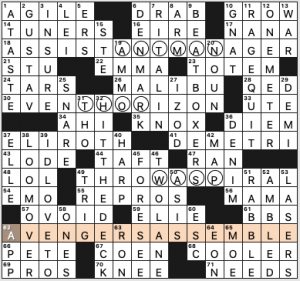 I figured out what the theme was with the back end of the first themer, which definitely helped me fill in the other three. Pop culture!

You ever see a truck transporting port-a-potties? I hereby decree that we call those LOO MOVERs henceforth. Sure, 38d. [Affect in a distant, menacing way], LOOM OVER, that works, but it’s not funny. And then there’s 29d. [Prefix with god or john], DEMI. Now, a demijohn holds 1 to 16 gallons of liquid, but shouldn’t it really be the name for a port-a-potty that holds even more? “Hold your nose—here comes the loo mover with a load of demijohns.”

Fave fill: MALIBU, ELI ROTH (could someone who knows Hebrew tell me if ELIE and ELI ROTH constitute a dupe, or if Eli and Elie are entirely distinct names?), RAGE-QUIT, “I’D LOVE TO,” BEAT BOXERS, HIT THE DECK. 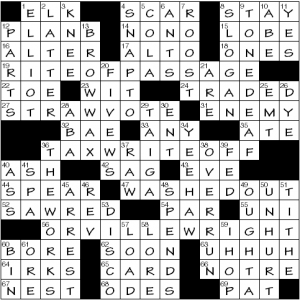 Two elements to this theme. First, we have homophones of \ˈrīt\. Second, the positions of said homophones travels left-to-right, both within the relevant entry and in its absolute position in the grid.

The additional dimension elevates it beyond the simple—perhaps expected—midweek theme.

The rest of the puzzle is rather no-nonsense, relatively free of flashy entries and twisty clues. The only question-marked punny ones are 4a [Lasting impression?] SCAR (which tends to be raised, anyway), 60a [Move to tears, say?] BORE (pretty good, that one), and 37d [Beyond rare?] RAW (also good). Perhaps three of these is a good amount, and it’s just that the rest of the clues feel so dry. 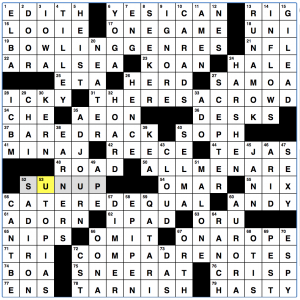 It’s Wednesday, and that means it’s time for the AVCX.  Today’s edition was a little late in arriving in my inbox, but with a title like “I Can Re-Late”, that was perfectly apt.  BEQ helmed this 17×17 grid, so let’s check out what’s going on:

Each answer has a “late” RE making a normal phrase a little wacky – BOWLING GREENS, THREE’S A CROWD, BREAD RACK, ALL MEN ARE CREATED EQUAL, and COMPARED NOTES all get a quick transformation.

it doesn’t look that sad to me. 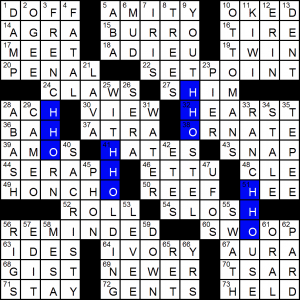 With this grid design, it was quite likely to be a “down” theme. I quickly saw HH repetition, but actually, it’s HHO, a non-standard way to represent H2O. This, together with the answers’ arrangement, makes them WATER/DOWN.

The grid design is quite conservative, but that’s often a good choice. Mostly we have one-word answers, but more colourful choices are included such as HONCHO, SERAPH and SACRISTY. I assume that [Hassock cousins], OTTOMANS means a HASSOCK is some other kind of furniture?