Looking at the circles in the blank grid, one can see that they sort of flow from upper left to lower right. So I was primed to be looking for a word or phrase that would run through the circled letters. And I was right. Each grouping is a euphemism for “Hell,” as revealed to us by 58a HELL BENT clued [Totally determined, and a literal description of this puzzle’s circled letters]. 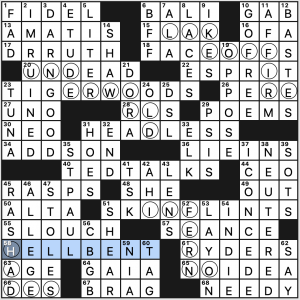 Nicely done. I like that each of the entries shares letters with some really nice fill like FACE-OFFS, UNDEAD, TIGER WOODS, HEADLESS, and SKINFLINTS. And the HEADLESS/UNDEAD/SEANCE collection makes for deliciously grim fare. This would have been a good one to save for Halloween.

I will pick one nit, and that’s the crossing of GAIA and NIA. Checking the Cruciverb database, GAEA with an E outpaces GAIA with an I, two to one. (And I think I just saw it within the past week, but don’t ask me where.) So it’s reasonable to assume an E here. Crossing that with a character name [Nicole Maines’s “Supergirl” role] from a TV show (no idea if the character is major or not or how popular the show is), touches on the unfair. Granted, NIA is more of a name than NEA, but GAEA is more common than GAIA. Guess which direction I went. Also, I could do without CBGB which I only know from crosswords. That little section could be quickly fixed with CBER, which isn’t great, I know, but it’s better than CBGB (in my opinion).

And we’re back to our regularly scheduled male Fireball programming.

There were some fresh entries in this themeless. It was not blazingly hard. I couldn’t even have toasted a marshmallow over it. My husband and daughter made homemade marshmallows yesterday and OMG the deliciousness. 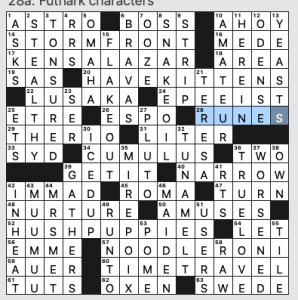 Back to crosswords. I enjoyed seeing KEN SALAZAR in the grid. I also loved HAVE KITTENS, partly because one of my friends told me his family has been playing “Exploding Kittens” during quarantine and loving it. The symmetrical answers, HUSH PUPPIES and NOODLERONI, were also fun.

Could have done without STORM FRONT. It’s clued as [Weather forecast line], which is of course entirely accurate. It’s also a white supremacy group and right now seems like a bad time to have that entry in a puzzle without acknowledging the association. Indie crosswords don’t have to worry about a “breakfast test.” They don’t have to abide by anyone’s ideas about where opinions belong and where they don’t. Indie crosswords can have an editorial position on issues of the day (see, for example, Queer Qrossowrds, the Inkubator and the AVCX, as well as Ross Trudeau’s Rosswords, and a bunch I’m missing). The world is burning. Black Americans are being murdered in our streets. Take a stand.

What I didn’t know before I did this puzzle: never heard of LUSAKA (it’s the capital of Zambia). Did not know that ODENSE is the largest city on the Danish island Fyn (didn’t actually know it was on the island of Fyn at all). Did not know that CUMULUS was Latin for “heap.” Also had not heard that J Lo’s daughter is named EMME.

After two weeks of underwhelming themes, today’s NYT felt like a step back in the direction of what I look for in a Thursday NYT: 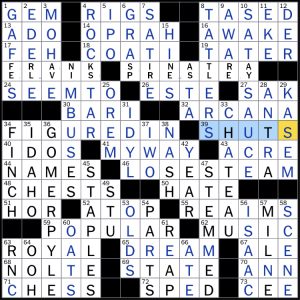 Both FRANK SINATRA and ELVIS PRESLEY need to be filled into 20A/22A for the down crossings to make sense – the print grid even has slashes in these squares to make that clear.  While both artists released versions of “MY WAY” over the course of their respective careers, but I’m not sure that fact is really notable or crossword themeworthy, especially when the theme is rounded out by the stiff-seeming POPULAR MUSIC across 59/62A.  There’s a lack of balance to the way this theme is laid out, though I feel like I’d be more forgiving if the theme felt more interesting to me.

“My Way” is based on the French song “Comme d’Habitude”, written by Jacque Revaux and performed by Claude François. Its eventual English lyrics were written by frequent crosswordese Paul ANKA and have nothing to do with the original French lyrics.

Elsewhere in the grid, given the double-letter squares you’ll need to remember the last name of swimmer Gertrude EDERLE, the first woman to receive her own ticker tape parade in 1926, cake mix brand Duncan HINES, and that SATAY SAUCE is a Thai dip. 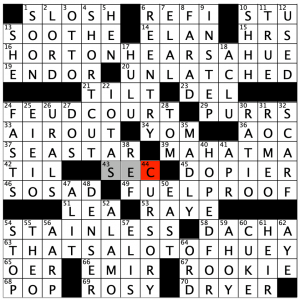 THEME: “Ooo” sounds are switched to “You” sounds in common phrases to create wackiness.

While I suppose HOOEY in 63A and HUE in 16A are not complete dupes, the sound that’s being changed is exactly the same, which I consider inelegant when it comes to themers. In general I wasn’t a big fan of this one. After grimacing at the fill in the north, I was looking forward to uncovering the grid-spanning theme up there, but the vocabulary in the clue for 16A took the enjoyment of that away.

Still, the fill! REFI, STU, ELAN, HRS, ENDOR, DEL, SHHH (?!?!?!), ELAL, FARAD and that’s just the north! Even normal stuff like OTTO found a way to feel stiff with [Director Preminger] as its clue. But really, the list goes on: SEC, ORD CUKE, ELIS, IOTAS, EIEIO, URALS… etc. It’s a crosswordese feast. I always try to solve the Universal from a new solver’s perspective. Unfortunately, if I were new to puzzles I would find this one to be a turn-off. Even the title was a bit stiff and difficult to interpret (“A-cue-stick” sounds like “Acoustic”).

On a positive note, the phrase THAT’S A LOT OF HOOEY, while dated, is fun to say, and the alteration with that ridiculous clue is amusing.

Overall though, not my favorite. 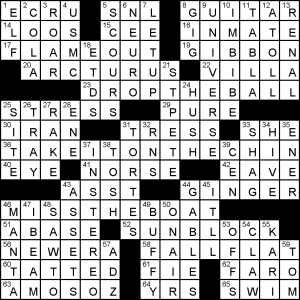 Paul Coulter’s puzzle features five idioms meaning, broadly, to fail: FLAMEOUT, DROPTHEBALL, TAKEITONTHECHIN, MISSTHEBOAT and FALLFLAT. They are applied to specific situations where they are apt. In some cases, the idiomatic expression comes from that very situation, and in those cases the result is less effective.