Hello, hello! June 13 is important to me for two reasons. First, it’s my sister’s birthday. Second, June 13, 2005 was the day I launched Diary of a Crossword Fiend. Happy 15th birthday, dear blog! Crossword Fiend helped me switch gears from freelance medical editing to full-time crossword editing, so that’s cool. And it’s allowed me to help shape our corner of the Internet, along with the dedicated Team Fiend crew of smart, funny crossword lovers. Webmaster Dave Sullivan keeps things operating smoothly, and used to blog the daily CrosSynergy puzzles. The current crew of writers includes Adesina Koiki, Andy Kravis, Ben Smith, Derek Allen, Gareth Bain, Jenni Levy, Jim Peredo, Jim Quinlan, Joon Pahk, Laura Braunstein, Matt Gaffney, Nate Cardin, pannonica, Rachel Fabi, Rebecca Falcon, and Sam Donaldson. I’m grateful to every one of them for generously contributing their time and energies to Fiend, and I also want to thank the writers emeriti who’ve blogged here in the past. Thanks, too, to all of you who read what we have to say about the crosswords that engage our minds, and who join the conversation in the comments lounge. Here’s to another 15 years!—Amy 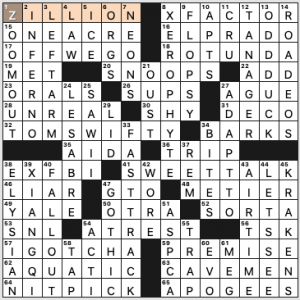 I typically don’t love themelesses that lean heavily on corners of intersecting 7s. Some of the 7s are good, but they’re mostly going to be less colorful than what you see in stacks of 9- to 11-letter entries. And some of the 7s pall, like ROADEOS, LEFT ARM, and ONE ACRE. Shorter bits holding it all together, your AGUE and APTS and GTO and ACT I, don’t add much.

It does look like the constructor sought out Scrabbly fill—we see ZILLION and X FACTOR crossing ZOOM OUT and XEROPHYTE, KRAKENS, and XIANGQI (!) crossing EX-FBI (blurgh) and AQUATIC.

It has been a while since I have seen a puzzle from Michael. This one was fun, and also is a great grid construction with a few longer answers all crossing in the middle. I did have a brain cramp near the end of this puzzle, hence the error marks near the bottom of the grid. I’ll explain my stupidity below! 4.4 stars for this one.

I will stop here. On to more puzzles today! 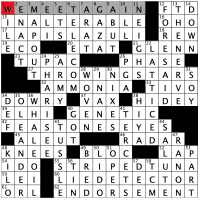 I will call this one middle-of-the-road. I stopped and started this a few times, and one of those times I forgot to pause the timer, so I have no idea what my actual time is. I am guessing around 20 minutes. But note the grid image: no error marks! I tried to just power through this one, and as usual, upon reflection of the finished grid, everything seems easy now! I am still hoping to meet Matthew Sewell one of these days, but until this pandemic has passed, that may not be any time soon. But kudos to him for another great Stumper to amuse us, if not slightly torture us, for a few moments once again! 4.6 stars for this gem.

Congratulations to Amy on 15 years of this blog! Everyone stay safe and healthy this weekend! 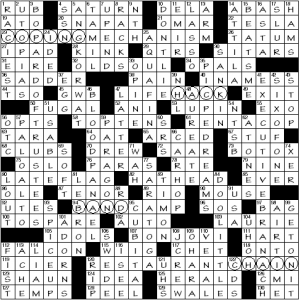 … what does one often do before conquering? Divide! And that’s what we have here. Really impressed with this theme and execution. “Only” 4 theme parts, but that’s because of its complexity and exquisiteness.

The circled squares contain the names of types of saws. These saws ‘cut through’ crossing vertical entries, but only divide them at one spot. Why? Because those constitute items that can be cut by a saw. Further, each item that’s ‘cut’ is matched to a type of saw appropriate for that use!

THEME: Celebrities whose last name ends with S is moved to the first name and turned into a possessive to create a wacky phrase. 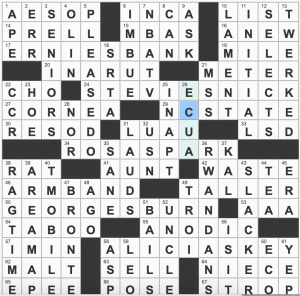 I liked this idea quite a bit! It seems simple, but trying to explain it is actually quite a challenge. It is consistent throughout and each name was iconic. A joy to uncover the themers for me.

Nothing to splashy in the fill, but not much to grimace at either.