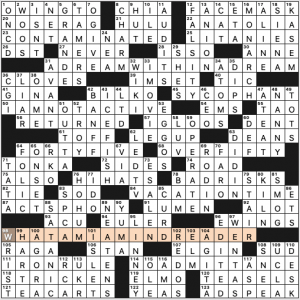 The “Making Arrangements” title suggested, cryptic crossword–style, that the theme would feature anagrams. Glancing at the cross-referenced pairs of theme clues and not having any idea what a single theme answer would be, I groaned and was prepared to dislike the puzzle. Turns out, I kinda dig the theme:

There may be other anagram pages on the Internet that include all the themers, but if there is, certainly a vast majority of solvers have never seen it. I have seen apt anagrams before, such as ASTRONOMER /MOON STARER, but none of Randy’s themers rang a bell for me.

Things I marked while solving so I would remember to mention them here:

Four stars from me. I rather enjoyed the puzzle, which too often is not the case in Sunday-sized puzzles.

I figured out the theme in the first few seconds, which was fine – the theme answers were still fun to uncover. This is a well-executed and enjoyable theme undercut by some unpleasant fill.

Let’s start with the theme. Each theme answer is a three-word phrase with the first and third words swapped for a wacky effect. 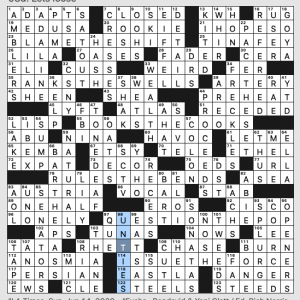 Except for my tiny quibble with the last one, this is a solid, fun theme.

Unfortunately, the fill is not as sparkly as the theme. I didn’t much care for AMBLERS at 1d, and I bet some people had trouble with the density of names in that corner, including LILA McCann, ADALINE (movie role), biblical entries DELILAH and ELI and SHEEN at the bottom. The unfortunately plurals continue with CRESSES. We also have SHAK as an abbreviation for Shakespeare – never seen that in or out of crosswords.  I could also have done without partials A HAT  and NOWS, as well as AREO, IBEX, and OEDS (ridiculous plural part III). Every section of the crossword had at least one entry that made me wish I’d borrowed the scowl-o-meter from Amy.

What I didn’t know before I did this puzzle: three of the names I cited in the NW – LILA McCann, ADALINE, who was apparently played by Blake Lively, and whichever SHEEN was in “Lucas.” I’ve heard of the Sheens, but didn’t know any of them was in that movie (I looked it up. It was Charlie).

A good reminder that there are other days of the week! I’ve been stuck in a Tuesday for a few months…

THEME: Days of the week are removed from one phrase and “shifted” into another- both of which get the wacky clue treatment. 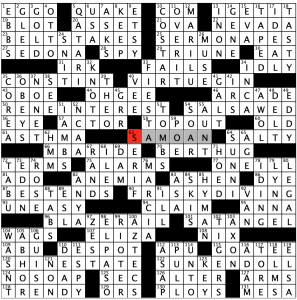 I took a mini road trip before solving this puzzle, and I plenty of time to consider the title, “Day Shift” (and this is one of those puzzles where if you don’t consider the title, you may be scratching your head at the theme). I figured it would be something like this, but my guess was that the “shift” would happen within a single answer. To give a (bad) example of what I thought was going to happen, instead of BELMONT STAKES, it might be BELT STAKES, MON! clued with a Jamaican flair. Evan’s execution is, of course, much more satisfying as it doubles the number of themers and is tighter throughout.

Most of the resulting phrases landed solidly, perhaps the only exception being the last set since the alteration didn’t completely change from the base phrase (STATE and DOLL are still key parts of SUNSHINE STATE and KEN DOLL). I guess that happens with a couple other entries as well, but it was most noticeable to me with that pair. I also enjoyed it more when the base phrases were lively (like RENEWED INTEREST as opposed to BERG). But with so many theme entries, it would be impossible for them all to be two-word phrases to begin with.

Things to note that are par for Evan’s work, but shouldn’t be overlooked:

Liked the clue for APU [“The Problem With ___” (2017 film focusing on a “Simpsons” character)]. If you haven’t seen it, it’s very much worth watching. Read about why Hank Azaria stopped voicing APU here.

Thanks, Evan, for fun on this SUN today! Really enjoyed this one today.

Theme: As the title indicates, each theme answer is a modified phrase with an added musical note in front. 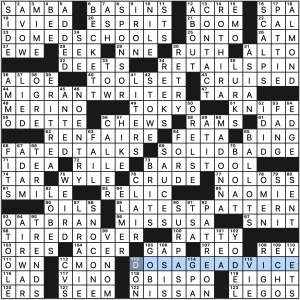 Nice, musical theme. My only nit would be that I wish the added letters sounded like the notes. For example, I wish the TI addition in the seventh theme entry sounded like “tee.” But there aren’t many words that fit that criterion beyond tiara, tiki, and Timor, so maybe it just wasn’t possible.

The title reminds me of the old game show, Name That Tune, where contestants had to guess the title of a song based on hearing the fewest opening notes. I want to say there was a reboot of that show, but don’t hold me to it.

Moving on to the fill, Zhouqin is known (to me, anyway) for always including fun, colloquial phrases in her grid, but I’m not seeing too many in this grid. But there’s still plenty of solid lengthy material to go around. REN-FAIRE tops my list of fun stuff, and there’s also BARSTOOL, OAT BRAN, MISS USA, BECKETT, ROTH IRA, “NO ENTRY,” MADONNA, SNO-CONE, and PATREON, the creator-oriented website. In the scowl-worthy category, BOO AT, earned my boos, but that’s about it.

One clue of note: 47a. [Voice actress Strong]. TARA. I don’t remember this name, and I’m having to look up the work that she’s done (Rugrats, Powerpuff Girls, Fairly OddParents, Teen Titans, etc.), but I want to say how cool it is that the constructor and/or editor chose to highlight a voice actor here. If you have any interest in learning about the world of voice acting—and even if you don’t—I highly, highly, highly recommend the documentary I Know That Voice, which is streaming here (with ads). I guarantee there will be something in there that will surprise you. I took one voice acting class once, and if I could pursue it, I would, but it sounds like an incredibly tough and competitive business.

Solid theme and fill, as usual, where ZB is concerned. 3.5 stars.