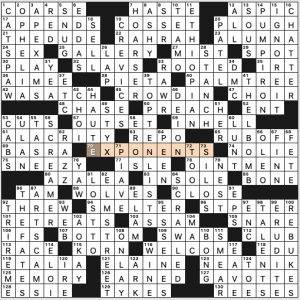 The theme consists of a bunch of “X to the Y” phrases split into individual X and Y words placed in the grid such that the Y word appears where an exponent would relative to word X, if words X and Y were numbers. The revealer is 70a. [Mathematical concepts suggested eight times in this puzzle], EXPONENTS, and it’s sort of a cute concept but in practice it’s a matter of “here are 18 cross-referenced clues that probably get on your nerves.”

Here’s a game to play after filling this grid: Look for other pairs of words where one looks like a superscript to the other, and make “X to the Y” phrases out of them. AIMEE to the SLAVS! (Til Tuesday tours Eastern Europe.) SNEEZY to the EXPONENTS! (Allergic to math.) ASSAM to the ST. PETER. (Bring him some tea, he hasn’t had any in centuries.) WASATCH to the PIETA? (If Mohammed will not come to the mountain … but wait, there aren’t sculptures of Mohammed.)

Overall, the fill is quite good, which is all the more impressive since the constructing duo are first-timers. I liked the theme better when I was done with the puzzle than when I was working through the clues and needing to hit the crossings to piece together the cross-referenced theme answers. 3.75 stars from me.

When solving for time, I don’t always catch onto the theme before I’m done. Such was the case here. I saw the revealer at 97d [Lunchtime, and a hint to the starred answers’ center three letters] MIDDAY, and assumed I’d find the word DAY in the middle of each theme answer. Uh-uh. Instead, all seven days are represented with their three-letter abbreviations in the exact middle of each entry. 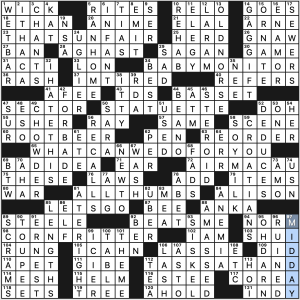 I’d say this about perfect for a Sunday Universal theme and puzzle. The theme needs to be clear and accessible, the fill needs to be gettable, and the cluing needs to be at a Monday/Tuesday NYT level—all making for a quick, pleasant solve. This fits the bill just right.

There are some entries I’d rather not see like ICAHN [Corporate raider Carl] whom I only know from crosswords. L.A. RAM ain’t great either, but it’s one of those entries solvers have to learn to put up with.

But mostly there was a lot of fun fill: WET BAR, GAG GIFT, ROOT BEER, CHOWDER, SOY MILK, CROATIANS, SCRAMS, TOUPEE, ATE RIGHT, and all the wonderful conversational entries “LET’S GO!,” “I’M TIRED,” “BAD IDEA,” “OH DARN!,” “BEATS ME,” “I HATE THIS.” I, however, love this! 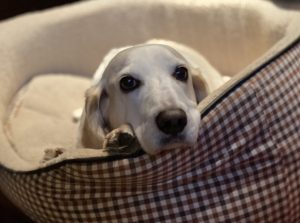 Fun puzzle all around with a theme that provided a surprising, aha moment. Four stars.

A puzzle that’s very reminiscent of another constructor’s style… but more on that later. 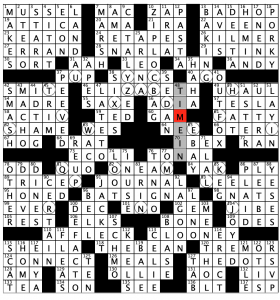 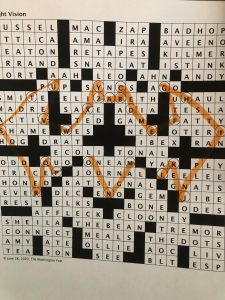 Look how spot-on the bat image is! Coupled with the (lovely) tribute to ELIZABETH Gorski, a a veteran constructor who is known for including grid art in her themes, this is one to remember. 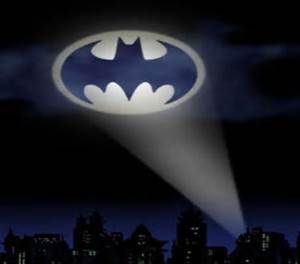 The grid is very constrained with the A-Z placement of the letters (I don’t think the casual solver knows just how difficult it is to place letters like that… much easier to fill when the grid consists of “traditional” themers that stay linear). So difficult was it, that Evan was unable to fit Adam WEST’s name in- just a simple four letters (read: not at all simple). So instead, there’s a little homage in the first four across clues.

Here is a note from Evan about this puzzle:

This crossword is a tribute puzzle to Liz Gorski for her many Sunday-sized puzzles with connect-the-dots images. It’s more specifically a riff on a New York Times puzzle of hers from Halloween ten years ago called “Fangs for the Memory,” where you connected the circled letters alphabetically to draw a picture of a bat (though that one wasn’t Batman-themed). It was a stroke of luck that I could fit her own name ELIZABETH at the top of the Bat Signal.

(One other Easter egg that’s not easily noticeable: I tried for a while but couldn’t fit Adam WEST in the grid, so I put his name in the first letters of the first four Across clues.)

The only thing I didn’t like was the AHN / HAHA / ADIA / SEDAN area. Had no clue on AHN, couldn’t remember ADIA (though it’s been in crosswords many times), and found the clue for HAHA a bit too difficult [“Oh man, that’s classic!”].

And my favorite batman didn’t make the cut! ARNETT! Keep your KILMER and gimme ARNETT any day! Hehe.

Again, I don’t rate Evan’s puzzles, but this is another 5 star.

Also, this is intensely enjoyable: 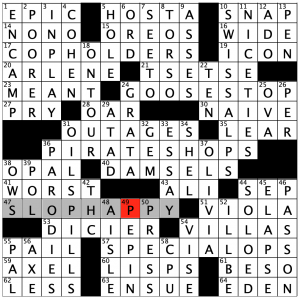 I found the revealer somewhat confusing because OP as a whole unit is replacing letters or being added to the base phrase. Just the vowel before the P in the original phrase is being changed. So that didn’t sit right.

I do like that each of the vowels being changed is different. U then E then I then A. Strangely in backwards order, but fine!

GOOSE STEPping for me conjures up negative images, I think because when I first learned the term my middle school history teacher was describing Nazi soldiers in Germany, so I always associate it with that. I’m very surprised that it is making an appearance in a crossword.

Before I start, let’s get one thing straight. An EEG is not a scan. It is not. It is a diagnostic test which identifies and tracks the electrical impulses that travel from the brain to the skin. I know it’s got useful letters. I’m not asking constructors to banish it from their word lists. But please, please, constructors and editors, FIND ANOTHER CLUE. [Neurological test], [Reading material for neurologists], [Epilepsy indicator], [Seizure signal?]. There are lots of options. Just not “scan.” I’m begging you.

OK, back to the theme, which I enjoyed. Each theme answer is a common phrase clued as if it had something to do with breakfast. 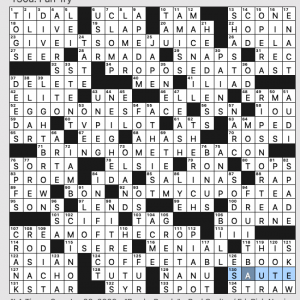 All the answers are solidly in the language and clues are amusing. It’s a nice Sunday theme – entertaining, not challenging.

The fill, on the other hand, was neither entertaining or challenging. SSA, SSN, and SST are not great on their own. When they’re all in the same puzzle, they’re flat-out terrible. What the heck is a PROEM? I looked it up; it’s an introduction to a book or speech. Never heard it before and I thought it was a typo, except that I got Mr. Happy Pencil so I knew it had to be right. TAU and KAPPA is one Greek letter too many, especially since they’re both clued with reference to the alphabet. Plus we have partials A HASH and A NAP. It all gave me a scowl.

What I didn’t know before I did this puzzle: see above re: PROEM. I also didn’t know that Jerry’s show started off as “The Seinfeld Chronicles.”