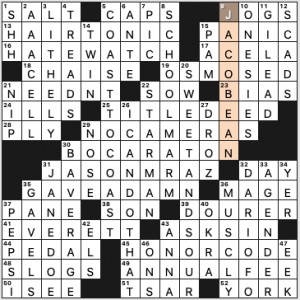 What the heck? We’ve got ourselves another Friday-difficulty puzzle but for Saturday. I wanted more of a challenge!

When I read the 1a clue, [Rim coating, at times], I figured this might be secretly referring to the rims of car wheels, but no, it’s SALT on a margarita glass. The wheels came into play a moment later with 4d. [Baldness is the result of losing them], TREADS, referring not to hairless heads but to tires.

I appreciated 9d. [Like the era that began in the early 1600s], JACOBEAN, because I just voted for the Best Wrong Answer to a Learned League question asking What term, rather than “Jamesian”, is used for English literature coinciding with the reign of James I, beginning in 1603? Some wag answered, Big Jimmy Style, which is perfect.

Fave fill: HATEWATCH (which I don’t do—life’s too short and there are too many shows on my TBW list), JASON MRAZ, GAVE A DAMN (wear your face mask to protect other people, please!), HONOR CODE, COAST TO COAST (my guy and I were just laughing about Sade’s “Smooth Operator,” whose lyrics include the magical phrase, “coast to coast, L.A. to Chicago.” What the what??), “YEAH, I CAN DO THAT,” and SWEET AND SOUR. Proper plural brand name ONESIES is good, too.

Did not know: 41a. [Betty who sang “The Shoop Shoop Song (It’s in His Kiss)”], EVERETT. 1964 American Bandstand performance in the video below. Enjoy! 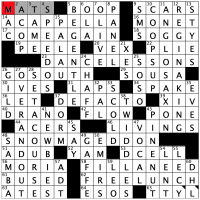 My friend Kyle is serving up another fine themeless puzzle this weekend! There is a great entry at 48A (see below) that doesn’t conjure up too horrible an image in the middle of June and July! I didn’t find this too difficult, and the error marks you see in the SE corner were due to a typo. (That’s my story, and I am sticking to it!) I really enjoy Kyle’s puzzles; perhaps because we are from the same area of the country? It seems like the vast majority of constructors are from the NE section of the country and not the Midwest. I hope you enjoyed this puzzle as well. 4.4 stars.

I could go on, but I’ll stop here! Thanks for reading! 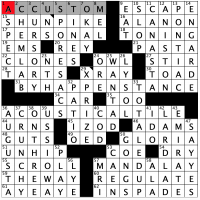 This was a weird Stumper for me. the NE and SW corners fell rather quickly, while the other two corners took FOREVER. I have two error marks in the grid, which I will surely discuss below, but suffice to say there were a couple of unfamiliar terms in this one. I think some people still feel intimidated by not “knowing” everything in a puzzle, but the more puzzles I do, the more I realize how little I actually know. I am constantly learning new things, and I hope that doesn’t stop any time soon! This is a Les Ruff puzzle, so it isn’t super thorny, but it is still a toughie. How did you do? 4.3 stars from me.

Please have a safe and healthy weekend! 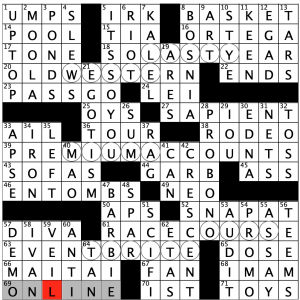 This theme type isn’t my particular taste (yuk yuk). But I’ll start off with things I do like: EVENTBRITE and SO LAST YEAR have a nice current ring to them! EVENTBRITE is probably new to a lot of solvers, but since I’ve purchased tickets from them a handful of times, I didn’t get hung up. I also liked IT’S SO YOU! in the fill. And stacking themers  without causing too much yuck in the fill was nicely done as well.

The biggest thing I do not like about this puzzle has nothing to do with the construction. It has everything to do with Universal’s refusal to circle letters in its grids (unless you download it from this site, which a new solver is unlikely to do). In my opinion, it’s too much to ask of a new solver… “Count and mentally circle your own letters… then unscramble!” I’ve seen many a new solver try to interpret Universal’s instructions when it comes to “workarounds” to circling letters, and just give up. I am completely befuddled as to why every other major publication is able to employ circles in grids, but Universal (who, per its website, “…sets the standard for all daily crosswords”) does not.

Anyway, back to the puzzle.

For me, I don’t much like enjoying a theme after I’m done solving, and in this type of puzzle that’s usually what happens (especially when interpreting the theme is dependent on the title). So there really is no AHA moment during the solve. It’s mostly a themeless. Some of the themers feel forced too- like OLD WESTERN. I just known them as WESTERNS (also SWEET doesn’t bridge the word OLD so OLD is entirely superfluous).

Does anyone else say UP TOP! in place of “High five!” I think we used to say that. Perhaps it’s regional. It’s not clued that way, but I think it could be! 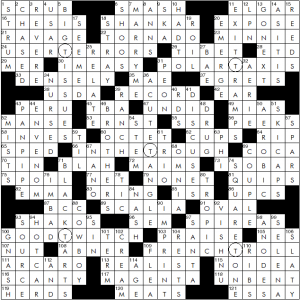 Final word of theme answers gets a letter T affixed to the beginning, for twacky results. These Ts occur at the crossings of two themers and I’ve here circled them for convenience.

The original phrases are kind of 71a [Lackluster] BLAH, and the new ones aren’t spectacular, but the clues do a very good job elevating everything as much as possible.

p.s. Apologies for the possible illegibility of the solution grid. I installed a new version of the solving app (Xword) and can’t seem to dictate the output quite as well as I used to. Am working on it.