Thanks to Amy for putting up the post and the grid while I was being a space cadet on Sunday evening. My apologies.

As she said, the theme is two-word phrases in which the second word is contained in the first word. There are helpful circles. 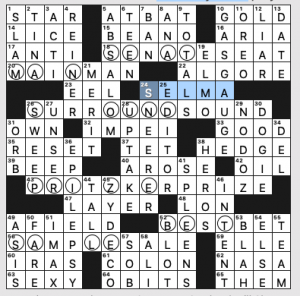 It’s an accessible Monday theme that wasn’t a whole lot of fun to solve. I don’t want to be a SNEERER, so I’ll stop there. Except who says SNEERER?

What I didn’t know before I did this puzzle: that the OREO was invented, or at least originally marketed, in 1912 (although now that I think of it, there was a centennial puzzle, wasn’t there?) or that David Oyelowo played Martin Luther King Jr in the movie SELMA. Speaking of which, have you see our own Rebecca Falcon’s Twitter thread about Black representation in crossword clues and answers? Read it. As a community, we need to do better. A lot better. 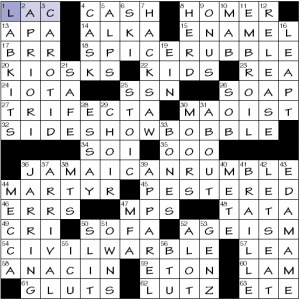 Nice amuse-bouche of a puzzle, a good way to ease into the week.

Hi all! Happy challenging puzzle Monday! Today we have a puzzle from Kameron Austin Collins, with a pretty interesting grid design and one of my most favorite (15)s ever. The grid is unique in that all of the black squares form what look like tetris pieces, none of them diagonal to each other (except for those connected by a corner helper). It’s cool and different! I also like the L-shaped corner helpers. V visually appealing. 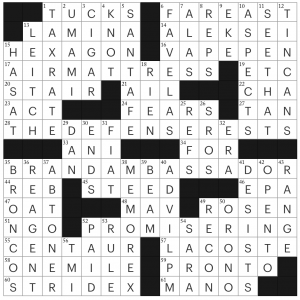 The long grid-spanning entries today are THE DEFENSE RESTS and BRAND AMBASSADOR. BRAND AMBASSADOR is fine, but THE DEFENSE RESTS is *chef’s kiss* so good! Other excellent long stuff includes FAVELAS, AIR MATTRESS, and PROMISE RING. I love the clue on AIR MATTRESS [Commodity subject to inflation?], but I don’t totally get why PROMISE RING‘s clue has a ? [Token of steady commitment?]. That seems like a pretty straightforward clue? Anyways, here’s a song from the band The PROMISE RING that I find stuck in my head for no reason way more often than makes sense.

Overall, aside from a couple of clues I had to squint at and some gender parity issues, this was an enjoyable way to start the week. Lots of stars from me ? 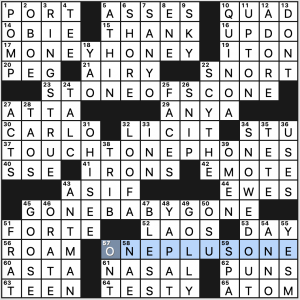 Didn’t notice the theme until after the solve but it’s perfectly fine. It’s just unusual to have two themers on a Monday that I’ve never heard of.

I did notice how dated some of the fill felt (YES’M, GOLLY, ASTA) and a higher-than-normal amount of crosswordese (partials IT ON and A THIN, ATTA, SSE and ENE, TETE, YAP AT, NAE).

I did like the few modern touches like ANTMAN and QUINOA. RINGS TRUE is excellent of course. SNOWED OUT with its odd clue [Canceled, as an early-season Cubs game] made me raise an eyebrow. Obviously “snowed in” is more common, but how often does a Cubs game get SNOWED OUT?

Overall, this one didn’t do much for me, maybe because I’m still enjoying a three-day weekend celebrating my wife’s birthday. The theme works, but it’s not enough to rise above the tiredness of a lot of the fill. 3.25 stars. 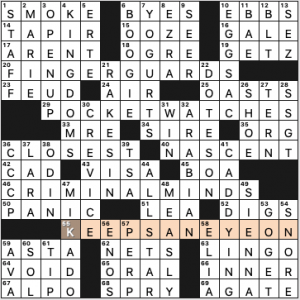 Watch this space next week for Team Fiend’s newest member, Stella Zawistowski! She’ll be covering the Monday LAT for us.

The plurals at 20a and 29a aren’t arbitrary additions to make the letter counts work out—they’re necessary to match with CRIMINAL MINDS, and the revealer uses the S as well. Slight ding to the theme for the “keep an eye on” meaning of “guard” basically being the same sense that’s used in FINGER GUARDS.

Much of the fill caters to longtime solvers rather than newbies attempting to get their feet wet on a Monday puzzle. OASTS, LEA, ASTA, AGATE as a marble, CCCP, ERTE, ELIA, TERN? Oof. There’s also an awkward partial: 53d. [“__ it, Rover!”: “Fetch!”], GO GET.