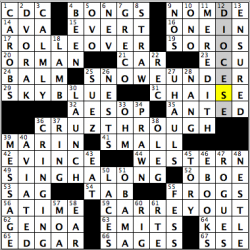 Good day, everybody! Can you believe the Fourth of July is about to be upon us this Saturday?! Well, depending on where you live, you can totally believe it because of the incessant fireworks going off in neighborhoods all across New York City every darn night!!!!! Is this happening in your city/neighborhood as well?

Today’s grid features the repackaging of common phrases by using a homophone to replace one of the words in the phrase. The homophone also happens to be the last name of a well-known public figure, as suggested by the cluing of each theme entry.

Depending on where one falls on the political spectrum and/or their penchant for giving credence to conspiracy theories, one can have a field day talking about this grid, with the likes of OBAMA (51: [44th president]), SOROS (19A: [Philanthropist George]) and CDC being entries (1A: [Org. concerned with COVID-19]). Love the timeliness of MEREDITH in the grid given the recent news that the Magnolia State legislature has passed a bill to remove the Confederate Flag emblem from its state flag (11D: [Civil rights activist James ___, first African-American to attend the University of Mississippi]). About two weeks ago, one of the top college football players in the country, Kylin Hill of rival Mississippi State University, made headlines across the country by stating that he would not play for the school as long as the Confederate flag remained a feature on the state’s flag. Make fun and/or dismiss sports all you want, but Hill’s public stance, in addition to the general unrest and national reckoning of having to consistently confronting systemic racism for actual change to take place, was instrumental in the state’s representatives finally tackling this issue and making this long-overdue change.

“Sports will make you smarter” moment of the day: TAB (54A: [Restaurant check]) – One of the great soccer player to ever put on a United States jersey, former midfielder Tab Ramos is currently the head coach of the Houston Dynamo of Major League Soccer. Born in Uruguay, Ramos played on three different FIFA World Cup teams for the US Men’s National Soccer Team, and finished his international career with 81 “caps” (appearances in international play) and eight goals. On Jan. 1995, Ramos was the first-ever player to sign with the Major League Soccer, America’s top-level soccer league that began play in 1996.

BONUS: The National Women’s Soccer League got underway this past weekend, the first American sports league to resume play since the coronavirus-induced shutdowns of sports leagues in the U.S. One of the teams in the league is SKY BLUE FC, headquartered in Harrison, N.J., a stone’s throw away from Newark (29A: [Azure]).

Theme: Things with FLAGS (60a, [What all of the starred answers have]). 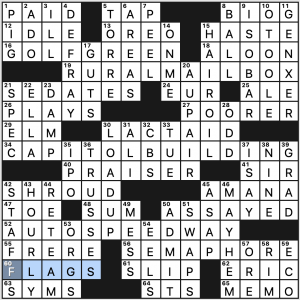 Odd that this theme occurs approximately two weeks after Flag Day. But it works as a theme for solvers who need it to.

Not a whole lot of sparkle outside the theme, unless you count LACTAID and HAIR OIL. The former is a product we use in our family. Not so the latter. I wonder what the average age is of those whose first choice was HAIR GEL vs those whose first choice was HAIR OIL for the clue [Pomade’s kin]. MAYHEM is a nice word, and I like DEFRAY because it doesn’t mean what you would think it means at first glance.

Everything else from SEDATES to ASSAYED to TRUSSES to ISOBAR to RETEAM to PRAISER feels workmanlike. 3.3 stars. 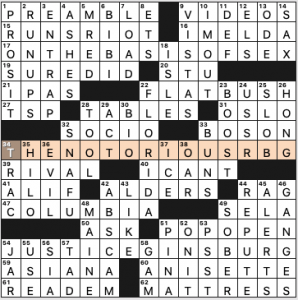 The theme topic today is Ruth Bader Ginsburg, and 6/30 is the 40th anniversary of her confirmation as a federal appeals court judge. She’s far better known for serving on the Supreme Court since 1993, of course. Here are the themers:

Nice quote in the 54a clue, but that isn’t her name, and the grid would be better with a 13/8/8/13 theme set that moves “Ruth Bader Ginsburg” to the clues. Not that it was difficult with the cross-referenced clues—any RBG fans will have caught on quickly.

I’m not keen on the grid having those 8×6 corners, particularly since it means there are four nonthematic 8s running Across and making the 8-letter themers fade into the background. There’s no reason for a Tuesday puzzle to strive for a word count of 74, especially not when it means you end up with RUNS RIOT crossing RUN-UPS, a glaring duplication. (The I’M OUT / I CAN’T overlap is subtler.) ANISETTE feels awfully obscure for Tuesday solvers, as does the airline ASIANA. 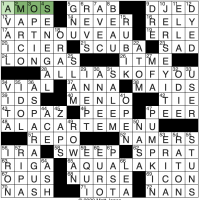 The grid image today is from the Mac version of XWord, which I like a lot. I used to use it quite a bit on my PC, but my old computer died and I haven’t installed this on the new one yet. XWord solves .jpz and .rgz puzzles, which is handy! Thanks to Matt Gritzmacher’s list for the heads up that this was available. For this puzzle, the themers are “surrounded by gold,” as the flavortext says. Literally.

The symbol for gold is AU, and each of these theme answers starts with an A and ends with a U, for clarity. My wife is a big fan of the music in “Phantom”, and when I showed her this theme entry she immediately started singing! For that moment of joy, 4.6 stars!

Nothing too obscure this week! But there is this:

Finally, here is a clip of Andrew Lloyd Webber from YouTube recently that highlights the song mentioned above! 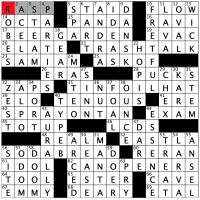 The revealer is at the end of the puzzle, and does a nice job of tying together the seemingly unrelated theme entries:

Easy peasy! It looks a little overly simple on retrospect, but I had no idea what the theme might be while I was solving, so kudos for a clever gimmick. Nice and easy on a Tuesday! Can you think of any others? I thought possibly of GAS can, but those are mostly plastic these days! (I am showing my age!) 4.4 stars.

Please have a safe and healthy week!