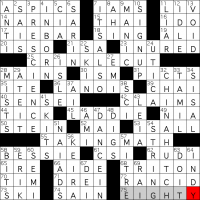 hello and welcome to episode #630 of matt gaffney’s weekly crossword contest, “A Number of Creatures”. for this week 4 puzzle, the instructions tell us that the answer is a creature you’ve never seen. okay. what are the theme answers? well, depending on how you look at it, there’s only one, or every single answer is a theme answer.

let’s look at the one first: the last across entry is {Number of clues (and creatures) in this puzzle} EIGHTY. it is, indeed, an 80-word grid. how on earth can there be 80 hidden creatures? no other clues or entries in the grid suggest any kind of thematic content.

this took me only a short while to spot, but spot it i did, with some help from the fact that the grid has some truly awkward fill: every single answer contains an I. not only that, every single answer contains exactly one I. that suggests (at least homophonically) that each answer is a cyclops, making that the meta answer. (fun fact: the plural of cyclops is cyclopes, so you could say there are eighty cyclopes in the grid.)

incidentally, there are other viable answers, although if you submitted one of them just to be perverse, well, i hope you enjoyed that. :p

i’m not going to make a list of all the awkward fill; there are plenty of little particles and partials and a handful of unfamiliar names. i did notice that, for example, the crossing of DEI and SAIN would be better in both directions as a W to make DEW / SAWN; that might have been the clearest nudge towards the meta mechanism for me. some other noteworthy fill:

this isn’t my favorite kind of theme, mainly because it usually results in compromised fill, reducing the enjoyment of solving the crossword itself. this one had one nice aha moment, but then it was over. my favorite week 4 metas involve a succession of aha moments, so this was a little bit anticlimactic in that regard. still, it’s a big step up from last week.