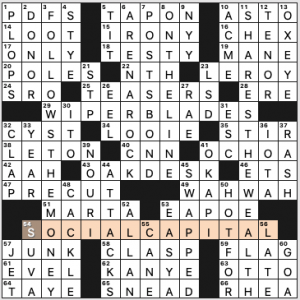 Theme revealer: 54a. [Network of personal relationships … or a punny hint to 3-, 7- and 11-Down], SOCIAL CAPITAL. Familiar phrases are clued as if they’re about actions on social media that relate to finance terms:

I like the theme contents okay, but not the unusual layout in L/R symmetry. Having a 9-letter themer sandwiched between two nonthematic 9s is awkward, as is including a beefy 11-letter Across answer, WIPER BLADES, that at first glance looks like it should be a theme entry. It’s cleaner to keep the non-theme fill shorter than the themers, particularly in the same direction.

Theme: USA is hidden in each theme answer.

A fairly standard hidden-word theme, but these entries feel tougher than your normal set of theme phrases.

I literally winced at IOOI which is meant to denote 1,001 [Scheherazade’s count]. According to cruciverb, this last appeared in the Philadelphia Inquirer in 2004. One can only wonder why it was allowed in the first place.

I did like TO DIE FOR, OVERLORD (clued as a reference to D-DAY), BOOM MIKE, and LAID UP. I’ve never heard of UBERIZED [Disrupted via mobile technology] which, as clued, sounds like an attempt to hamper communications. But it’s really more about upending an industry the way that Uber disrupted the traditional taxi service. The Cambridge Dictionary gives a fuller definition: “to change the market for a service by introducing a different way of buying or using it, especially using mobile technology.” It’s always good to learn a new word.

It was hard to get excited about this one with the standard hidden-word theme, the trivia-oriented theme entries, and IOOI. 3.1 stars. 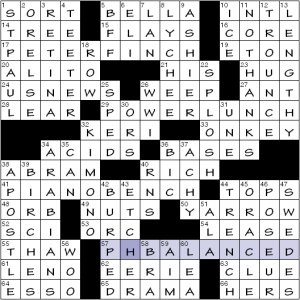 To bolster the theme, row 8 consists of the paired 34a [They turn blue litmus paper red] ACIDS and 36a [They turn red litmus paper blue] BASES. From what I recall of chemistry, litmus paper is white; acids and bases will turn it red or blue, respectively.

Aside from not being sold on the theme, I was irked by some glaring yet avoidable duplications. 14a [Ancestry.com diagram] TREE, 39d [Trees in a Frost poem] BIRCHES. Something like [Bark canoe sources] could’ve worked. Then there’s 8d [Nutlike Chinese fruit] LYCHEE with 49a [Banana bread additions] NUTS. I don’t even know what “nutlike” is doing in the clue for LYCHEE; the fruit is soft and fleshy, not hard and dense like nutmeat. The fruit’s seed—which is most analogous to a nut—is not edible (of course not all nuts are edible, but I’m invoking the culinary sense, trying to find a way to make this clue rational). Perhaps it’s that litchi fruit looks vaguely like an acorn and similar nuts? Not sure. Regardless, in sum, “nutlike” is wholly unnecessary in the LYCHEE clue, and introduces another major duplication to the crossword. 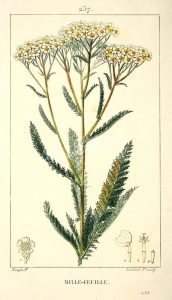 {Going through the clues} 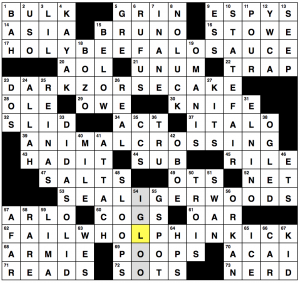 Today’s AVCX is another guest appearance from Ella Dershowitz, with guest editing from Paolo Pasco, with a 3.5/5 difficulty rating.  Let’s dive right in:

Have you been playing ANIMAL CROSSING this summer?  I haven’t, but I’ve enjoyed the memes/videos of other people playing, and this is a nice riff on the name.  Each answer is two phrases with the name of an animal – HOLY COW and BUFFALO SAUCE, for instance – where the animals have been replaced with a hybrid of those two animals.  A cross of a COW and a BUFFALO is a BEEFALO, so 17A is HOLY BEEFALO SAUCE.  23’s combo of DARK HORSE and ZEBRA CAKE gives us DARK ZORSE CAKE, 53A’s SEA LION and TIGER WOODS gives SEA LIGER WOODS, and 62A combines FAIL WHALE and DOLPHIN KICK to produce FAIL WHOLPHIN KICK.  This theme was a lot of fun.

Hellooooo team. I am *exhausted* from several sleepless weeks of puppy crate training, but I’ve got some stuff to say, so let’s see how this goes! The outline of this post is thus: (1) Staircase entries (they’re great!) (2) Other notable entries (also great!) (3) A larger point about gender equity in puzzles (it’s not a new point, but one I want to make). Here we go! 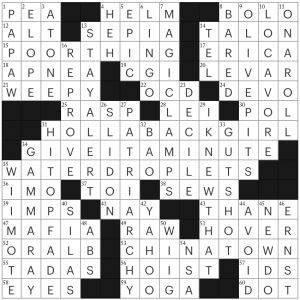 I really enjoyed the central staircase. HOLLABACK GIRL is a fun song and a fun entry (although, in searching for the video below, I remembered how Gwen Stefani used to appropriatively employ the Harajuku Girls as background dancers for a while, which further googling revealed has already been extensively analyzed as problematic so I won’t do that again here). Other staircase entries GIVE IT A MINUTE [Be patient!] and WATER DROPLETS [Dew, essentially] are also solid, and I am always here for a long colloquialism.

Other notable long entries include HI-TOP FADE, OLIVE PITS, LOCAVORE, MAGIC LAMPS, and PATRIARCHY. I am particularly amused by the clue on OLIVE PITS [Tapenade maker’s throwaways], but I love the bell hooks clue for PATRIARCHY [“___ has no gender”: bell hooks], which brings me to my final point for today.

In Monday’s post, I noted the gender breakdown of the puzzle, for what I think is the first time in my reviews. I received a note from a reader that gently REPROVEd me for having done this, for the first time, on one of Kameron Austin Collins’s puzzles, as it gave the impression that I was holding a constructor of color to a higher standard than other constructors. I want to be clear that that was in *no way* my intention; it was the product of an ongoing conversation I’ve been having with another constructor about gender and the New Yorker, which had led me to the decision that I wanted to start keeping track of gender representation in all of these puzzles. I want to apologize to Kameron for not recognizing how it might look to start that project on the day his puzzle came out, particularly because he has a constructing history full of strong representation of women in his puzzles and has personally been vocal about the importance of representation in puzzles more broadly. As has Natan.

But bell hooks’ quote sums up exactly *why* I want to start keeping track of these things in New Yorker puzzles: the New Yorker has a female editor and, now, a majority female constructing roster. And yet. And yet. And yet we still consistently see more men in these puzzles than women. Take today’s puzzle:

Moreover, to the Queen point, Gwen Stefani’s HOLLABACK GIRL, which could have been clued in literally hundreds of ways, was clued in reference to a Queen song. Is it an interesting factoid? Sure. I listened to the song again to hear the lyric “Another One Bites the Dust,” and that was an experience I’m glad I had. But so many other things could also be said about this song that don’t involve bringing in men (see, e.g., above re: cultural appropriation). And on its own, this clue is not bad! My point is that the incremental accumulation of male-centered cultural reference points results in a puzzle that skews male 12:5. And then the male-skewed puzzles accumulate, and so on. I don’t mean to belabor this point, but I think it’s important to point out that although crosswords have come far in terms of constructor and editor representation, the work is not finished. I’ll continue to track this, probably in a bullet point under “A Few More Things,” going forward.

ANYWHO, back to this puzzle: I enjoyed it! Natan’s cluing voice is one of my favorites, and the grid is well-made and the fill is gorgeous— even the three-letter entries are all solid.  Overall, lots of stars from me. 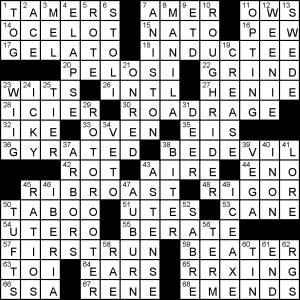 Quite a simple theme type at heart – two word phrases of the sort R…/R…, four of them – but with the wrinkle of them intersecting at the second R and RRXING as a revealing answer. We get a historical ROUGHRIDER intersecting ROADRAGE and a ROTOROOTER intersecting RIBROAST.

FIRSTRUN is by far the best entry in the puzzle; in the language, but something unlikely to be found in dictionaries. On the other hand, ASTENSE is an entry so contrived it should cause a puzzle to be remade.