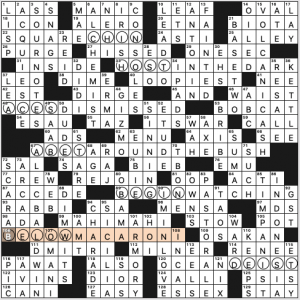 Let me start by saying that 47d is a bizarre place to tuck your 3-letter theme revealer. ABC is the [Kind of order for the circled letters in this puzzle] … though who among us would call alphabetical order “ABC order”? It’s just weird. So the theme entries are familiar phrases where one word’s letters are sorted into alpha order, rendering a different word:

Theme’s okay. One themer amused me, but ideally you end up with lots of fun theme content.

What else? Let’s see: 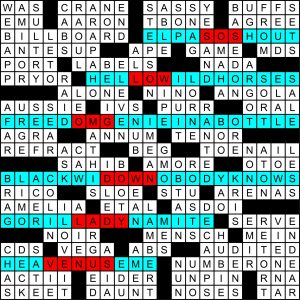 Circled letters in each long theme entry today from Evan, with each clue framed as an addition problem. Let’s see if we can do the math, but first we get a hint at 23-A: [Chart with Top 40 hits, including all songs in this puzzle’s theme] is BILLBOARD. And they are:

25-A: [Holler heard in a Texas border city? (Marty Robbins + Tears for Fears = Rihanna)] is EL PASO SHOUT. So we’ve got Marty Robbins’s “El Paso” plus Tears for Fears’s “Shout”, with Rihanna’s S.O.S. formed across those two. The others work the same way:

39-A: [Friendly greeting to a group of feral equines? (Adele + The Rolling Stones = Flo Rida)] is HELLO + WILD HORSES = LOW

59-A: [Patriotic spirit before it’s been released? (Wham! + Christina Aguilera = Usher)] is FREEDOM + GENIE IN A BOTTLE = OMG!

122-A: [Your plea to everyone in paradise that they employ your services? (Bryan Adams + Bill Withers = Bananarama)] is HEAVEN + USE ME = VENUS

And then at 125-A, the final touch: [Smash hit’s position, reached by each of this puzzle’s circled hits] = NUMBER ONE

So that’s fun, and was probably a lot tougher to create than it may appear at first glance, especially considering the constraint that all the newly-created songs have to be #1s.

13-A: [Rule for building on others’ ideas in improv] = YES AND. An interesting concept which I was familiar with as a conversational technique but not as an improv rule (I didn’t know it had a name, period). It keeps a conversation flowing nicely when you acknowledge and then add to what your interlocutor has just said.

I really enjoyed this theme. The title is literal in a cryptic sort of way. There are four pairs of theme answers, all in the Downs. The top answer is missing an N; the lower one has an extra – so the N dives. To make it even tighter, the first words are swapped.  It’s easier to show than explain! 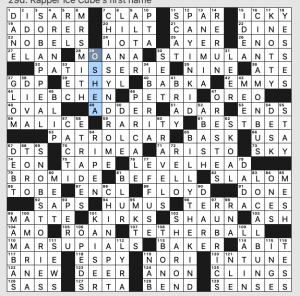 Four pairs of phrases, each of which totals 20 letters, fits into the symmetry of the grid, and has the N-DIVES pattern; that’s quite the feat of construction. I enjoyed it enough to tolerate the final set. 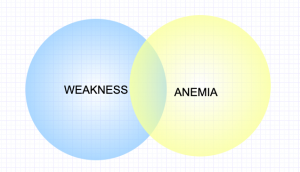 What I didn’t know before I did this puzzle: that Ice Cube’s first name is O‘SHEA (I looked it up to see if it included the apostrophe).

I love the title on this one, calling to mind getting a shot at the doctor’s office. The patient must have been quite loquacious and had to get a lot of shots because each theme answer is a common phrase interrupted by an OW! 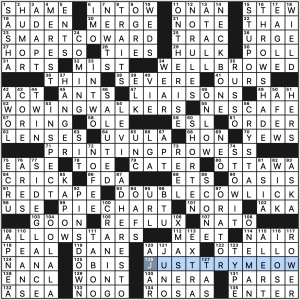 Universal Sunday crossword solution · “This Will Only Hurt a Little” · David Alfred Bywaters · 7.26.20

This was imaginative and playful. I enjoyed it very much.

Fill highlights: ON THE RISE, THROW SHADE, SIDE GLANCE, PINS DOWN, NESCAFE, PIE CHART, and RED TAPE. We got a whole neck mini-theme going on with NECK BONE [One may flavor turkey gravy], CRICK [Pain in the neck], and CRANING [Sticking your neck out]. They’re spread far enough apart that I didn’t notice during the solve, but now that I see it, it’s rather surprising.

Other than that, solid fill throughout. Coupled with a strong, humorous theme, I’d say this one’s a winner. Four stars.

Jeffrey Wechsler’s Universal crossword, “I Can Finish This” — Matt’s review

Add an I to end of familiar phrases, and wackiness ensues:

17-A: [Cassius Clay’s name change announcement?] = YOU CAN CALL ME ALI. From Paul Simon’s “You Can Call Me Al” which was a good song but had one of the worst video concepts of all time.

29-A: [Cocktail for a college VIP?] = DEAN MARTINI. From Rat Packer Dean Martin.

40-A: [Most convincing Himalayan cryptid sighting?] = THE BEST YETI. From the best yet. I think he put “sighting” in there since there’s only supposed to be one yeti. How could that be? There are either tons of yetis or zero. I suspect tons but it could be zero. If you know for sure please reveal in comments.

57-A: [Cab passed down through generations?] = INHERITANCE TAXI. From “inheritance tax.” There has to be an inheritance taxi somewhere in the world. What if the person who inherited said vehicle solved this crossword and said, “What’s so funny about that?”

Cute theme, and each one was grinworthy.

***I like the entry ELM TREE at 19-A [National Mall growth] because of the unusual VCCCCVV pattern, plus all three of those V’s being the same. I can’t think of another entry that fits those criteria; ONLY TOO is close but that Y is of course a vowel there.

***Lots of good multiword fill: ON A DATE, READ A BOOK, KEPT FOR, YES IT IS, CUTS IN TWO, and the aforementioned ELM TREE. Keeps the grid lively!