This was easier than the Friday puzzle for me. How about you? 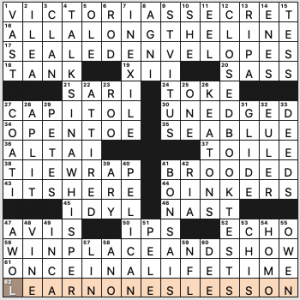 The grid’s got triple stacks of 15s at the top and bottom, and they’re latticed together with another pair of 15s. ALL ALONG THE LINE feels sort of unfamiliar to me, but the other seven 15s are all quite good. The stacks’ short crossings were pretty solid, too. The two that are probably the least known by solvers, AGNI and ENES, bring multi-culti cred, and the latter makes 58d. [Spanish 101 word with a tilde], AÑO feel like it’s part of today’s Spanish lesson with 14d. [Spanish letters with (or without) tildes], ENES (EÑES) echoing it.

If VICTORIA’S SECRET had been clued by way of that “fashion show,” it would have been icky. But instead we have 1a. [Retailer that hired its first openly transgender model in 2019], and I like it.

Not wild about UNEDGED, and ALTAI and RIA have a crosswordese tinge to them, but overall there was much to like here. Seven things: 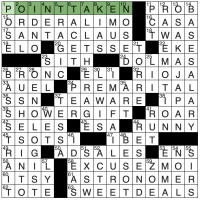 This one wasn’t too difficult, but still a fun puzzle. I have done a few of Joe Deeney’s at this point, and I like his style. There are a couple of tough entries in here, including one I have never heard of (see below!), but the crosswordese is kept to a minimum and we have some wide-open corners in the grid with some lively entries. Just because I don’t know something is certainly not a reason to include something in a puzzle, but I’ll bet you didn’t know the answer in question either (again, see below!!). Keep the puzzles coming, Joe! 4.4 stars.

Those promised comments, which weigh heavily towards the longer answers:

That is all! See some of you at Boswords tomorrow! 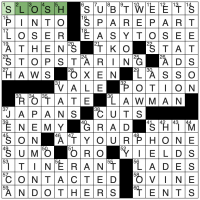 I was pretty Stumped today! Lots of tough stuff in here. The slightly wider open NE and SW were actually a tad easier, but the NW and SE (where I finally finished!) I found brutal. This one wasn’t anger-inducing hard, but I definitely aged a bit during solving! There were looong periods of staring at wide swaths of white squares in this solve. Funny how it still looks a lot easier AFTER the solve is done! Another great puzzle, Greg! 4.5 stars from me.

Some of the thorny bits:

I really want that title to be “Mixed Messages,” don’t you? Must mean the word “mixed” is already being employed in the grid… 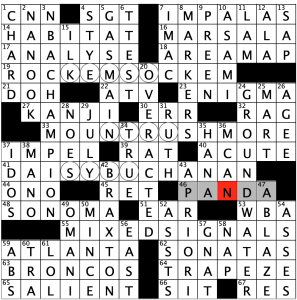 THEME: A word that can precede “signal” is scrambled in common phrases.

Clue of the year for MOUNT RUSHMORE! Great aha moment on that one. I never really felt a flow while solving this, but that wasn’t a bad thing. Both the fill and the cluing were unique, despite it feeling crosswordy at times. KANJI was new to me [Japanese writing system], but I like it! And NANOOK is back again! I wonder how a movie theater would fare if they showed a NANOOK of the North marathon. Not well, I would suppose.

Some odd stuff / crosswordy stuff in AGEE, IDOS, NOES (yuck!), RET, but interesting clues peppered throughout like [It’s now usually classified as a bear] PANDA (I never knew at as anything other than a bear!) kept it fun.

Of course, there is the persistent Universal problem (no fault of the constructor) that those who solve the puzzle downloaded from this site have a different solving experience than the masses because there are circles appropriately placed in the grid. Universal doesn’t circle letters in its regular publication and asks the solvers to count letters instead, which I don’t think is fair to the solver, especially novice solvers who could really benefit from the visual.

Still, as hidden / mixed word concepts goes, this one was well done! 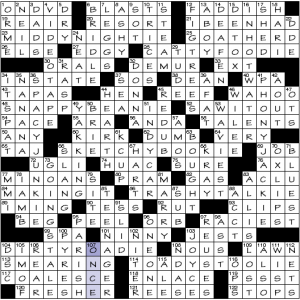 The title evokes the old Wacky Wordies visual puns from Games Magazine, but something different is going on here. Two-part entries—whether they’re phrases, compound, or affixed words—are separated. The first part receives a -y suffix while the second gets an -ie. Spelling is tweaked where necessary.

This is how I jokingly pronounce quaintisms such as Olde Shoppe and Towne Pointe.

Clever and entertaining enough while not being laugh-out-loud funny or anything like that.