The answer to this week’s contest crossword is a five-letter word.

We have five theme entries, so it’s likely that each on contributes a letter. Let’s see how:

And then there’s this suggestive clue/entry:

Hmmm. The title is “Color Code,” and at first glance, it might seem like an adjectival phrase, but the entry suggests we take it as a direction. What happens when we color the letters of CODE in the grid? Turns out, the only entries that contain those letters are the themers, so we must be on to something: 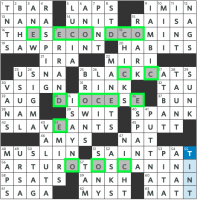 And, hmmm, with some imagination, one might think that those colored-in letters of CODE resemble … well, it is a stretch to say, a code of some sort? Like, a Morse Code? Let’s follow this lead:

… and that spells WIRES, which is a five-letter word and our answer. 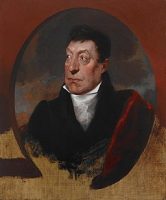 Portrait of Lafayette, by Samuel Morse. Everyone give it up for America’s favorite fighting Frenchman!

I did a little research on Samuel Morse (“a little research” = read the Wikipedia entry) and I did not know that he was a fairly renowned portrait painter before being inspired to invent the single-wire telegraph after observing some experiments with electromagnets.

And speaking of color codes, it also turns out that Morse was a unrepentant defender of slavery, publishing a treatise called “An Argument on the Ethical Position of Slavery in the social system, and its relation to the politics of the day” in 1863, during the Civil War. Apparently, after the Emancipation Proclamation, Morse decided that if a democratically elected government would do something so ill-advised as to free enslaved persons, then there must be something wrong with democracy. Yale University, Morse’s alma mater, has a residential college named after him.