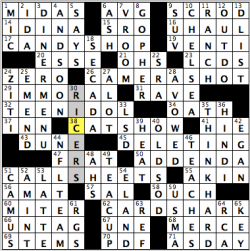 Hello everyone! I hope all of you are well, and I hope that those of you who participated in Boswords on Sunday had a wonderful time with your socially-distant tournament solving.

I forget where exactly I was when I first learned the lingo in the clue for DINER MENU, but it’s been a loooooooong time since I’ve heard that said (3D: [Where “Adam and Eve on a raft” may be listed as “Two eggs on toast”]). I want to say that I was at some breakfast place in Atlanta in 2008 when I heard that phrase first…and the only time, before today. Maybe coffee is more your thing for breakfast, and that’s well represented with VENTI (19A: [Large, at Starbucks]) and LATTE (53D: [Starbucks order]). Favorite entry was AND SO ON, and liked that, depending on how one clues it, can also be read as “and soon” (4D: [“Yadda-yadda-yadda…”]). I can see how the intersection of CAMUS (51D: [“The Stranger” author]) and MITER, like cuts made from a miter saw to create miter joints, might have been a sticky area for some (60A: [Cut corners?]). Probably the only entry that was somewhat of a mystery to me was MERCE, though I am pretty sure that I had come across the name a couple of times during trips inside of Lincoln Center (68A: [Late choreographer Cunningham]).

“Sports will make you smarter” moment of the day: CHELSEA (10D: [Handler on TV)]) – If you’re a fledgling English soccer fan in America and are deciding what team you want to throw your support around, there’s a reason you might cheer on soccer giant Chelsea Football Club that is tied to the red, white and blue. One of the team’s current star players in Hershey, Penn.-born midfielder Christian Pulisic, the 21-year-old who just finished up his first season with The Blues with 10 goals. Chelsea, based in West London, has won six league titles, with their biggest-ever triumph in Europe coming in 2012, when they defeated German-side Bayern München in the Champions League Final on penalties. (Probably even more of an impressive feat was what it did in the semifinals, as Chelsea needed to score two goals in the second matchup against Barcelona after the team was reduced to 10 men [John Terry was sent off/ejected], and Chelsea pulled it off! Sorry for all the soccer jargon!!) 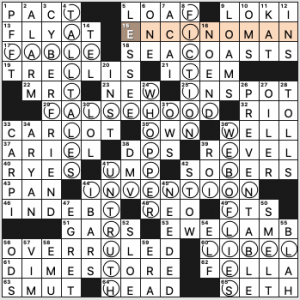 Note to self: Turn on a light somewhere in the room when you’re doing a crossword after dark, as it is too easy to make typos galore when the keyboard is barely visible.

Theme revealer: 36d. [It’s spun by mendacious people … or a hint to the circled answers], WEB OF LIES. This answer and all the other circled/shaded entries can all deficient in veracity: FABLE, FICTION, TALL TALES, FALSEHOOD, WHOPPER, UNTRUTH, INVENTION, and LIBEL. The thematic answers are placed symmetrically. Neat.

The layout accommodates plenty of longer fill. Highlights for me included ENCINO MAN, a garden TRELLIS, DIME STORE (my town’s outdoor plaza had a Woolworth’s dime store when I was a kid), and—a word that could apply to the coronavirus pandemic in the US—PREVENTABLE. Didn’t love all the fill, but it’s mostly Tuesday-accessible.

Improvement on CYBERFRIEND: “friend inside the computer” is the term of art in some circles. I’ve invariably been delighted to be able to meet in real life with many friends inside the computer, and if I like the way someone presents themselves in writing, they are exactly as expected when we meet in person.

Each theme answer has a CENTRAL PARK (59a, [Feature of Manhattan, and of this puzzle’s answers that contain circles]). In other words, the circled letters spell out a word that can precede “park.” 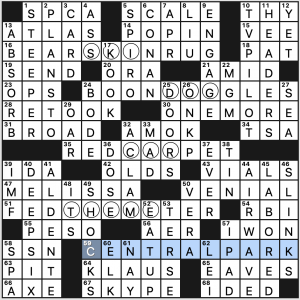 In hidden word themes, it’s usually more elegant when said word spans more than one of the entry words. But in this case, with the added “central” constraint, the hidden words are all in the exact centers of their respective entries. That’s enough of a challenge that trying to get them to span as well would be too difficult to pull off. This works nicely and the entries are solid or better, with BOONDOGGLES being my particular favorite.

The corners of this grid all have stacked sevens (thanks to the nine-letter central answer). They’re all well-constructed, but the SW corner stands out with DEEP SIX and AL DENTE crossing MELISSA Etheridge.

This puzzle is anything but a free-for-all! Yuk! Yuk!

THEME: Types of “payments” are at the ends of common phrases/names 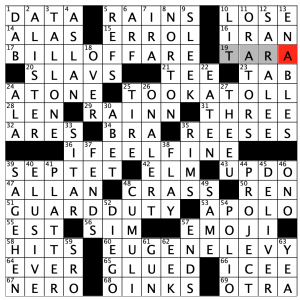 A solid, consistent theme today. Each of the phrases is familiar, and the synonyms for “payment” have a completely different meaning. I suppose TOLL is slightly similar in meaning, but that’s a stretch.

THE E.U. looks very strange in fill doesn’t it? Perfectly valid of course! Wanted TALL ONE to be TALL BOY.

I do enjoy Universal’s playful cluing; for instance, [Reach the Candy Castle last, in Candy Land] for LOSE is just plain fun. 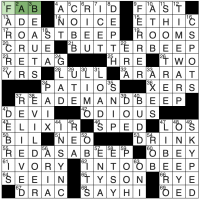 We are at Jonesin’ #999! Next week should be a hoot! But for now, we have a puzzle that I thought involved cursing at first, but that is far from the case!

The theme phrases all have a word that is one letter off from BEEP, and the puns begin. Nicely done, if not a little off beat, but that is what a puzzle should do: make you smile! I was a little slow on this one, but I think all the puzzles I did Sunday (Boswords!) wore me out a bit! 4.5 stars this week. 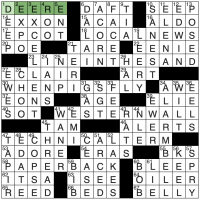 This byline is not ringing a bell with me, but we have a fine puzzle this Tuesday, and the trademark LAT revealer is at 58A:

Nicely done! We are all familiar with newspaper, sandpaper, flypaper, you get the idea. Well done. Again, I am not too familiar with Jerry’s puzzles, but if they are all like this, keep ’em coming! 4.2 stars from me.