Theme: Letters I and N have been switched in the main theme entries according to the revealer IN REVERSE [Backwards, and a hint to four of this puzzle’s answers]. 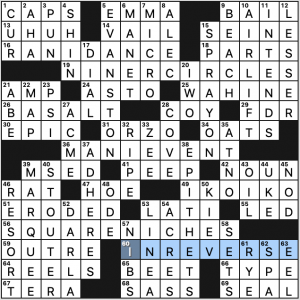 I started my solve quickly in that NW corner, but then things ground to a halt with tough (but fair) cluing, some less than stellar fill, and a rather uninspired theme. I slogged my way through, but really, I found no joy or humor in these theme entries and some of that fill really set of the scowl-o-meter. See: AS TO, MSED, AT NO, LA TI, and LINE A.

Initially, I scowled at IKO IKO [1965 hit for the Dixie Cups] as well, not recognizing the title or the musical group. But this is a New Orleans classic that’s been covered many, many times over the years, so I should have known the title. I do now.

Song title aside, the fill and lackluster theme was enough to weigh down the puzzle heavily. I liked EVANSTON, Ill., EPITHETS, MARQUEE, and WAHINE, though. 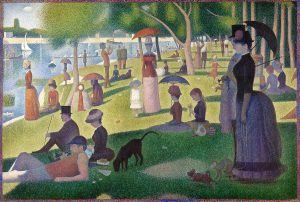 On one hand, I respect what’s been attempted in today’s NYT from Joel Fagliano, and I think it’s an interesting construction exercise, but it was absolutely no fun at all for me to solve.  Let’s take a look at a few pairs of clues in the grid, since this doesn’t have a theme so much as the theme is the entire across grid: 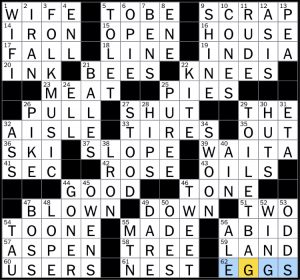 Et cetera, et cetera, et cetera, all the way until 61A’s “With 62-Across, some retirement savings” for NEST/EGGS.  From a visual standpoint, is it an interesting visual to look at a series of across clues that is essentially halved, since half of the clues are a “—“?  I guess.  Is it impressive to find a set of answers that can be spread across two spaces in the grid?  Maybe.  This feels like the sort of thing I would see a joke about on Crossword Twitter and find amusing, but in actual practice this annoyed the heck out of me and led to some awkward fill.  The concept is interesting, but that doesn’t mean I want to solve it.

If you’re going to mention Joni Mitchell in your clue for FOLK MUSIC, I’m going to post “Big Yellow Taxi”. Those are the rules.

The Fireball will be on hiatus until September. I was hoping for a really good, really hard puzzle to send us into the dog days of summer. I didn’t get it.

It’s a perfectly fine puzzle. It’s not exceptional and and it’s not hard. The theme answers are two pairs of Spoonerisms. 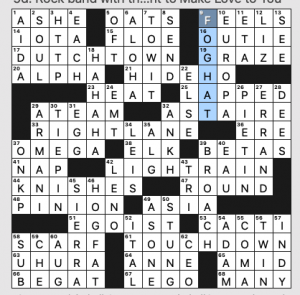 The theme is solid, consistent, and did not add anything to the solving experience. Seems like Peter really does need a vacation; this is kind of tired. He could have given himself the week off and found a woman with a fresh, challenging puzzle. Just saying. And yes, I know he pays other constructors and pays them well, and that constructing the puzzles himself is undoubtedly a crucial part of his business model. I want him to stay in business. I’d be willing to pay more for the puzzles in return for a commitment that even 25% of the non-Peter puzzles would be by non-male constructors. Given the funding success of the Inkubator, I bet I’m not the only one.

What I didn’t know before I did this puzzle: I’d never heard of DUTCHTOWN. I also did not know that the famous picture of CHE Guevara has a name, Guerrillero Heroico, and was taken by Alexander Korda. Wikipedia calls it the world’s most famous photograph, citing the Maryland Institute College of Art. You’ve seen it.

I leave you with the music of my youth, released the same year Arthur Ashe won Wimbledon.

THEME: Phrases that include livestock are reversed and clued wackily. 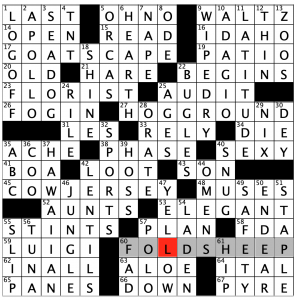 I had fun figuring out the phrases, and it works if you don’t overthink it! If you look closely though, the base phrases from which the wackiness is born are quite inconsistent. For instance, a JERSEY COW is still a COW. A SCAPEGOAT, on the other hand, is not a GOAT. A GROUNDHOG is still an animal, but not a HOG in the clued sense. A SHEEPFOLD is not an animal… yet it still has to do with actual SHEEP.

So again, as long as you ignore that part, the puzzle is just fine. FOG IN is a new term for me (I thought I had something wrong there) and WIPE DRY feels somewhat off as a stand-alone phrase.

Fun clue for FLORIST [Owner of a mum-and-poppy business]!

Not sure about how I feel about the clue for ELEGANT in this puzzle: [Like a beautiful crossword theme]. Feels like it’s navel gazing, and perhaps misplaced in a puzzle that is not super-tight in its consistency. 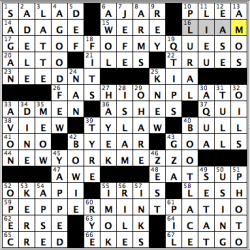 Good day, everyone! Hope you’re all doing well and continuing to stay safe as we get set to usher in August!

We have a “Bingo was his Name-O” element to the them of the grid, with puns being created by changing the final word of the phrases/nouns to create an additional the long O syllable at the end of each.

Any puzzle with a reference to members of the Wu-tang Clan will automatically hit a soft spot, and this one is no exception with the inclusion of The Genius, a.k.a. GZA (43D: [“Liquid Swords” rapper]). Looks like a wide variety of music is represented in the grid today, from BOWIE (42D: [“Boys Keep Swinging” singer]) to TULL (31D: [“Thick as a Brick” band, for fans]) to LIAM (16A: [Payne of One Direction]) to ONO, even with the no-but-yes musical reference (41A: [Hawaiian mackerel (hey, it’s better than another Yoko clue)]). Hope you all are up on your Spanish with JEFE (pronounced “HEFF-ay”) being the word for boss/chief (7D: [President of Mexico?]). A possible homage to the Chicago NBA team in the grid, with KERR (53D: [Steve with the NBA record for the most regular season wins for a rookie head coach]) winning three championships as a BULL in the 1990s during his playing days (40A: [“Hogwash!”])? Not sure if BEQ meant it, but today (and tomorrow) are holy days in ISLAM, as today is the day that a lamb is slaughtered and the meat is shared between family and the poor (28D: [Eid al-Fitr religion]). Eid al-Adha is tomorrow, which honors Abraham’s near sacrifice of his son, Ishmael, and God’s intervention of that by providing a sheep to sacrifice instead. Hey, when you grow up in a family that is majority Muslim on one side of it, you get to know these things sooner or later!

“Sports will make you smarter” moment of the day: TY LAW (39A: [2019 Pro Football Hall of Famer who won three Super Bowls with the Patriots]) – How did former New England Patriots cornerback Ty Law help usher in a sports dynasty? Well, in Super Bowl XXXVI back in 2002, the Patriots, a 14-point underdog against the mighty St. Louis Rams, shocked everyone in attendance at the Louisiana Superdome — including my brother and me, as we sat in the first row of the second tier of the stadium — and the sports world by winning the game, 20-17, sparked by Ty Law’s 47-yard interception return for a touchdown for the game’s first score. Law ended his career with 53 career interceptions, including leading the league in picks in 1998 (9) and 2005 (10). 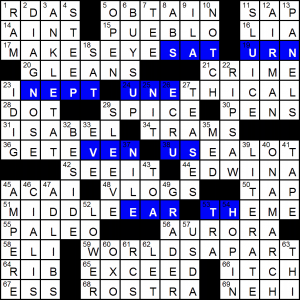 Today’s puzzle theme lies between two different answers in four across rows. There are four WORLDS APART, planets separated by a black square. It’s a clever visual, though, as with many of this kind of theme, it doesn’t fertilize the puzzle with interesting entries.

I’m also not convinced by ANKLETAT – which seems pretty arbitrary.