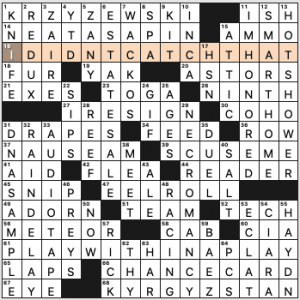 Another Saturday puzzle that played like a Friday—but I had just recently been checking on the spelling of Coach K’s name, so 1-Across didn’t have a chance to Saturday me.

I like the quasi-mini-theme of KRZYZEWSKI ([“Coach K” of N.C.A.A. men’s basketball fame]) and KYRGYZSTAN ([Landlocked land along the Silk Road]). If you get the chance to try Kyrgyz food, enjoy it! We had a Kyrgyz feast when a local Muslim institution invited neighbors to join their iftar one evening during Ramadan, and we ate well. I think (in my limited experience) that Kyrgyz Americans tend to call the country Kyrgyz Republic rather than Kyrgyzstan.

Other fill I dug: “I DIDN’T CATCH THAT” (between the masks and the summertime cicada noise, I’ve been expressing this concept in many ways), “‘SCUSE ME,” PLAY WITHIN A PLAY, a Monopoly CHANCE CARD, RAIN DELAY, NECROMANCY, “I’M HONORED” (which is much better than “I RESIGN“), SMART HOME (hard pass), and HOT SHOWER (except that clue is weird in the summertime—it’s too hot to take a hot shower after working out!). And REDUX! Which I am never confident I’m using right, so I tend to avoid it.

The combo of KNIFE and ESTATE SALE puts me in mind of the movie Knives Out, which we finally watched last week. Most entertaining!

One of my favorite names in cluing and fill is Evan Kalish! Solve this puzzle and you’ll see why.

THEME: The word SAGE is “cracked”- part of it appears at the beginning of a common phrase and part at the end. 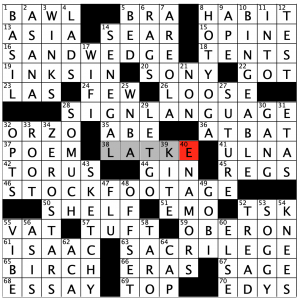 Thoroughly enjoyed this puzzle, though I must admit I pretty much ignored the theme. It was one of those title-dependent “figure-it-out-after-you’re-done-solving” themes for me, but it honestly didn’t matter. Evan is a master at unique cluing and quality fill, and this grid is chock-full of good stuff:

I like the “hidden-in-this-clue” style like [Music genre found in “home movie”] EMO (even though three letter music genre is EMO 80% of the time I think). Fun trivia like [Country containing Africa’s westernmost point] SENEGAL and [Hoops league with 10-minute quarters] WNBA. HOT YOGA! ZERO STARS! BINGEABLE! (I say “bingeworthy,” but still!). 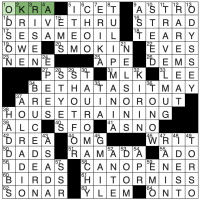 I had most of this done in about 5 minutes, but I had an error somewhere, and it took me a few minutes to find. When solving in Xword, if you check your puzzle, it ruins the grid image I need to screen capture for this blog! My mistake was at 2D, where I had KREME instead of KREWE, which I knew but had a brain cramp. I need to fix these errors when speed solving. I had two errors at Boswords, but I am chalking that up to poor sleep and I am just not as fast on a computer. Not sure why, since I solve on them all the time! A solid 4.4 stars for this one! 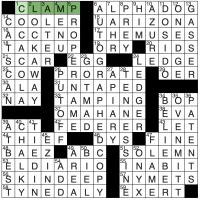 Under 10 minutes! I thought this was going to be a toughie after I got really stuck in the central area, but I found my mistake at 5D (NOUN instead of NAME), and then all went fairly smooth. There are some doozies in here, that is for sure, but it all makes sense in the end. I suppose! I cannot make grids this well, so my critiques will always be tempered with a respect for the craft. 4.2 stars this week.

Some of that zaniness: 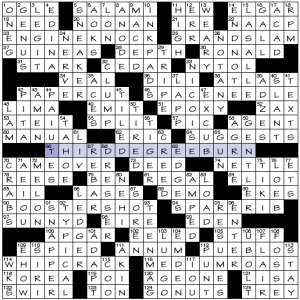 Phrases ending in synonyms of insults are clued as if they were in fact specific, contextual insults.

I get that insults are slurs, but nevertheless there’s something about the title that doesn’t entirely sit right with me. In truth I’m only speculating on this because I need to extend the text below so that when I insert a video for 46-across I want to make sure it’s well below the grid at right, so there’s no interference and funny formatting.

This isn’t the most original type of theme, but it’s clever and well done.