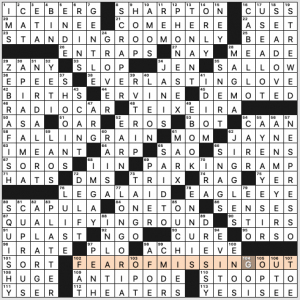 David shunts the G from the end of an -ING word to the beginning of the next word in some familiar phrases, and clues the goofy new phrase accordingly:

I liked this theme. I appreciate that there are just six themers, leaving plenty of space for the grid to include a bunch of stacked 7s, 8s, and 9s. The fill is pretty good overall.

This is one of those themes that’s an impressive construction but wasn’t much fun to solve. Each theme entry is the title of a movie that contains the title of another movie, and they’re clued by what they have in common. 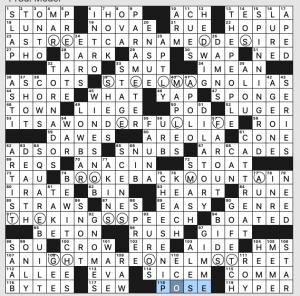 The titles inside the longer titles added nothing to the solving experience. The clues were straightforward, and when you get the longer one correct, you’ve got the shorter one. The pattern was evident from the first theme answer and there was no wordplay to amuse me as I marched on down the grid. I can see that it was challenging to construct given the constraints – six title-within-a-title entries that share a characteristic and are the right length for the symmetry. As a solver, my response is “so what?”

What I didn’t know before I did this puzzle: never heard of a LOW BAR squat in weightlifting, and I did not know there was a TARO blight in Samoa. Most of the Google hits are scholarly articles, so here’s the Wikipedia article for your perusal.

If you’re looking for a quick brown fox jumping over a lazy dog, you’ve come to the wrong puzzle.

THEME: Pangram! Four wacky sentences each use every letter of the alphabet exactly once! 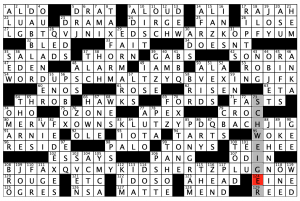 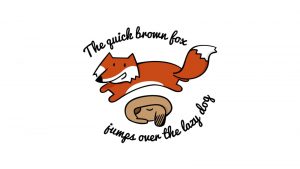 Wow. Just wow. I have a feeling this will be a divisive puzzle with some loving it and some hating it. While I can respect the reasons that some might not like it, I am firmly in the camp that loves it. Four complete (albeit over-the-top wacky) entries using a perfect pangram? That’s only five vowels to play with (okay, six)! Insane! Not to mention the construction around it… fill like OUTLANDER and DABBLER right next to it cross two of the theme entries. And yet, somehow, the fill doesn’t really suffer all that much. Or if it does, I didn’t notice. Looking back at the puzzle now, it does seem that there is more crossword glue than usual, but I suppose Evan’s always-excellent cluing helped me to look past it.

It’s also one of those themes that helps you figure out the puzzle. Since we know we’re going to be using every letter, it’s easy to assume the QVC and HERTZ part of 108A [*Mr. Novak, please send that home shopping network a copy of Junior’s car rental ad immediately.].

OXYTONE and SCHWEIGER were new to me, but I enjoyed uncovering both.

I bet that Evan’s going to get some grief and some hate mail for this one, but I say keep pushing the boundaries. And let’s not forget the careful balance of over-the-plate themes mixed in with zaniness like this. That is, if you don’t like a puzzle here and there, just wait a week. There’s one coming for you.

Paul Coulter is back! I feel like it’s been forever! 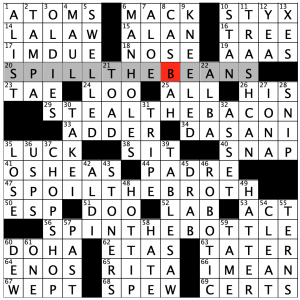 THEME: Not entirely sure, but phrases fit the pattern VERB BEGINNING WITH S + THE + NOUN BEGINNING WITH B THAT YOU MIGHT FIND IN A KITCHEN. Is that it?

I was confident on the theme up until BOTTLE. Then I doubted myself. I mean, BEANS, BACON, BROTH… BOTTLE? One of these things is decidedly not like the other. Still, an enjoyable, easy solve. 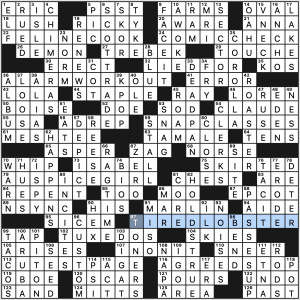 These all check out, though none of them tickled me very much—TIRED LOBSTER being the best of the lot. I’ve never heard of a reed stop which is defined as “a set of reed pipes in an organ.” Seems pretty niche such that your average solver wouldn’t have heard of it.

The fill is solid as usual when it comes to a Burnikel grid. I especially like CHIMERAS as well as TUXEDOS, HOLDS TRUE, RAGTIME, and DEADPAN with a clue referring to comedian Tig Notaro whose work I admire (and laugh at) very much.

This wasn’t my favorite Burnikel puzzle, but then, they all can’t be. It works just fine, it just doesn’t have her usual sparkle. 3.5 stars.