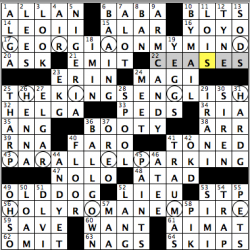 Good day, everybody! Hope you all are doing well in this first week of August and enjoying as much of the summer as you can!

This month marks where a majority of public school students will head back to school, though that’s still mind-boggling to me since I grew up in New York and, like a good number of school districts in the Northeast, did not start the school year until right after Labor Day. No matter when your districts start school, I’m sure a good number of students would rather keep their vacations going, as this grid subtly suggests. Circles that are spaced out are featured in the four longest entries, with the letters all spelling out a type of school and/or a school teaching method. The last across entry, SKIPS, acts as the reveal (64A: [__ school (plays hooky)…and a hint at the theme in the circled letters]).

As always, a reference to Africa in a puzzle will make me like any puzzle even more, including the country of my heritage and of my parents’ birth, NIGERIA (5D: [Seventh most-populous country in the world]), and crossing it with a person who resides in sports journalism, like ERIN, makes me swoon over this puzzle even more (23A: [___ Andrews, former co-host of “Dancing with the Stars”]). Furthermore, love some of the descriptors in the grid, though I am someone who has never be described as ARM CANDY (9D: [Good-looking companion]) but definitely could be described as an OLD DOG with some of the missteps in learning about new things (49A: [One who’s hard to teach, per an adage]). The timeliness of BY MAIL could not have been more on point, given the drivel being uttered from Washington about how an election that hasn’t happened yet is going to feature massive fraud by that voting method, though extensive research has yielded scant evidence of fraud over the years (10D: [One way to vote]). I’ll try to leave on a more positive note, so if anyone wants to describe their best BALL GOWN that they have ever worn, hopefully you can share with us what the design was and the occasion in breaking it out (36D: [Dress for a fancy occasion]).

“Sports will make you smarter” moment of the day: SAVE (59A: [Fill the piggy bank)]) – When I was young and starting to understand all of the statistics in baseball, I was dumbfounded by a baseball box score that had listed a pitcher earning a save even though his team won the game by a wide margin. At first, I had thought that a save situation in baseball occurred when a relief pitcher came in to the game with his team up by three runs or fewer, and then earned the save by finishing the game on the mound without blowing that lead. (That is true, by the way.) There are two other ways that a relief pitcher can earn a save in Major League Baseball: If the pitcher does not blow the lead after entering the game with the potential tying run standing in the on-deck circle (e.g. if Team A is up 6-1 in the ninth inning and a new pitcher comes in as Team B has the bases loaded) or if a pitcher completes the game by pitching at least three full innings, regardless of the margin of lead his team had at the time he initially came into the game. So as long as that pitcher came in to start the seventh inning and completed the game, it would not matter if that pitcher came in when his team was up 21-0 and finished the game with his team winning 34-0; That relief pitcher would earn a save in that scenario. Go figure! 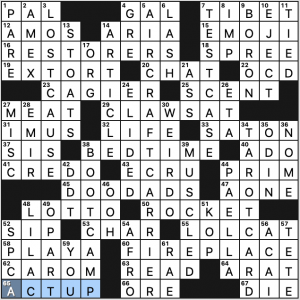 A lively set of entries, don’t you think? Even though I had no clue as to the theme until I got to the end of my solve and the revealer, I noticed what a lovely set of Down answers this grid featured. Other good Down entries: WEIRDO and PAELLA.

The Across answers aren’t so bad themselves, either: FIREPLACE, LOLCAT, DOODADS, and BEDTIME are all pretty fun. It felt a little awkward starting the puzzle off with a cross-reference to the very next clue, but I can see why it was done. You have those PAL and GAL that close together, people would wonder why you didn’t clue them together. 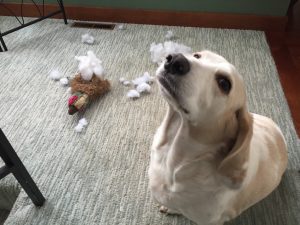 Not much of a watchdog. Penny couldn’t protect this stuffed pheasant. 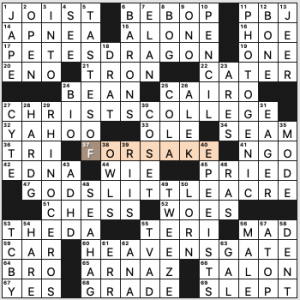 Cute theme concept; I like the irreverence of it. The revealer is FORSAKE, 37a. [Abandon … or two words often seen next to the starts of 17-, 27-, 47- and 60-Across], and the four themers start with possessives that frequently appear in “for ___ sake” phrases, but the phrases chosen are mostly not great for a Tuesday puzzle:

Moving past the theme, oof. There is a lot of terrible fill here, particularly for a Tuesday puzzle supposedly pitched at less experienced solvers. The JOIST/JAPE crossing at 1a/1d, ONO and ENO, the WIE/RIIS crossing (possibly WOE crossing French plural ROIS would be easier?), godforsaken THEDA Bara of 1917 cinema, suffix –CYTE, awkward TASTES OF, Popeye’s SEA HAG, maybe ELAN, COSET, LORN as an “old-style” stand-alone word, and EPEEISTS (!!)? The Scowl-o-Meter was going crazy tonight, and I found myself grimacing while solving. This puzzle would have worked so much better at a venue with puzzle titles, with that revealer removed from the center of the grid. Junk like COSET intersects three theme entries! The grid is far too constrained with the five thematic answers.

On the plus side, 29d. [Heavyweight at a zoo] clues RHINOCEROS, and thus I have a reason to direct you to this Twitter video of an adorable baby rhino scampering about as if it were as nimble as a baby goat.

Two stars from me. 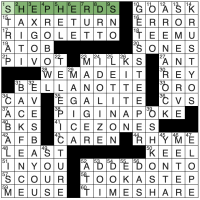 We are finally at 1,000! And the flavortext says “I say 28-Across!”, which is WE MADE IT, surely an appropriate sentiment. Just so you understand, 1,000 divided by 52 is over nineteen years of puzzles. I am amazed at the level of creativity that is required to accomplish this, not to mention the word skills needed to boot. We have a themeless this week, which I didn’t see coming, but in true Jonesin’ fashion, it is chock full of pop culture references I am totally unfamiliar with! I will discuss some of these below, but a stellar grid this week, even if a little challenging. Congratulations on 1,000 puzzles, Matt! 5 stars for this one!

I think there will be Jonesin’ puzzles re-ran for the next few weeks, but if they go back to 19 years ago, they will be fresh to all of us! Looking forward to that retrospective look at nearly twenty years of puzzles, and if that gives Matt a well-deserved break, so be it! 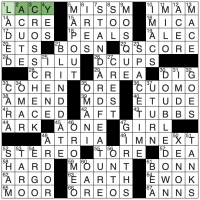 Our theme answers travel downward, and for good reason! See the revealer at 61D:

Clever! I have seen this theme quite often, but it still amazes me that you can have this many instances of words that all precede or follow something but can be paired into common phrases. Or maybe I am just seeing the same theme over and over again! Isn’t there a theme database somewhere? The theme is well executed, and even if it is duplicated, this puzzle has clean fill and was a fun solve. 4.4 stars from me.

Another Evan Kalish puzzle so soon? Fine by me!

THEME: The word “End” is deleted from common phrases to create new wacky ones. 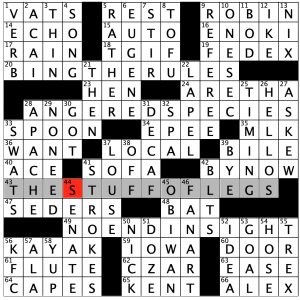 Perfectly tight revealer and three fantastic phrases after the deletion of END. Can’t ask for much more in this theme type. I didn’t see the gimmick until the revealer, but in this type of puzzle that only builds suspense and I enjoyed uncovering the wacky phrases without realizing that END was the missing culprit.

Fill and clues, great as always from Evan.

Anyway, another great offering. Thanks, Evan!